I don't know about you, but I am ready to send Summer packing!  Yesterday's "real feel" : 103 degrees!

Much of yesterday was spent dealing with a plentiful harvest of tomatoes, peppers, and lima beans.  I have found, over the years, that the easiest way for me to preserve tomatoes for later use is to roast them and freeze them.  It's so much less work than canning. 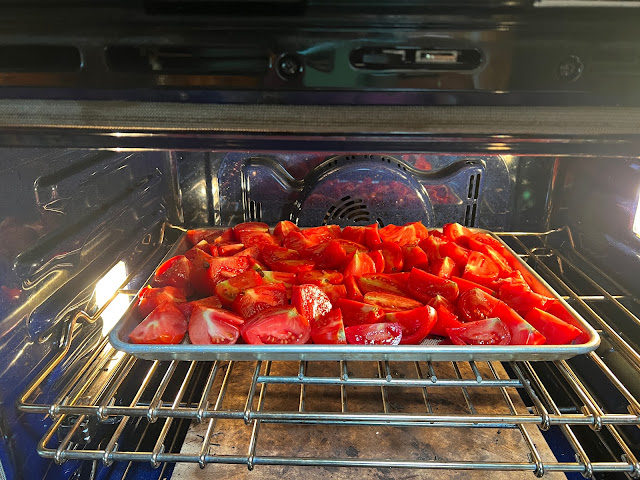 Later, during the winter months, I can grab a silicone bag of roasted tomatoes for spaghetti sauce, soups, and stews.  Roasting enhances the flavor of the tomato in my opinion. 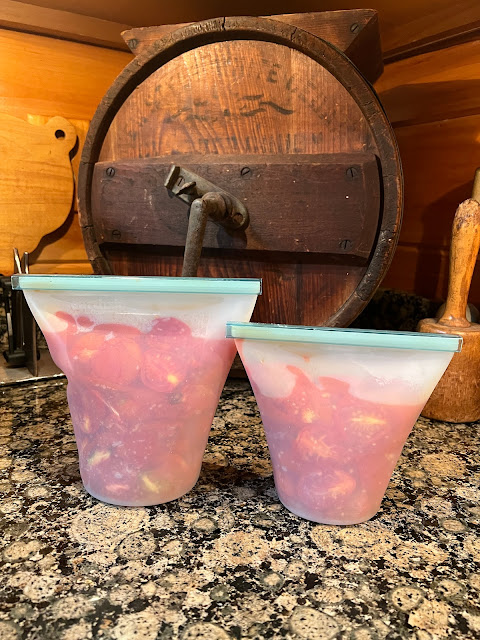 As for peppers, I chop or slice in strips and freeze them in silicone bags as well.

I cooked some of the lima beans (such a treat, and one that we rarely eat) 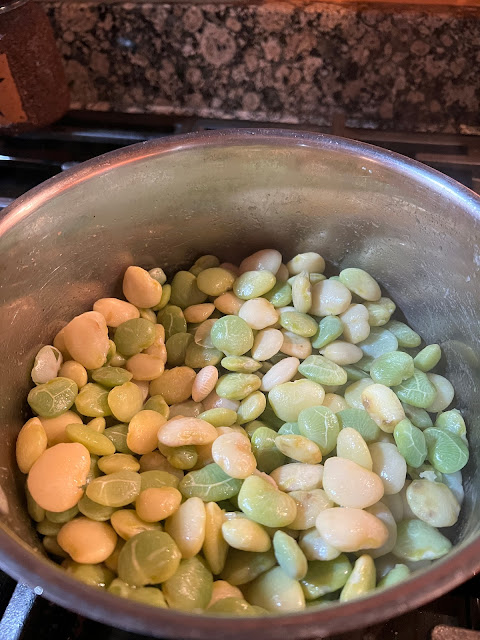 and am drying the rest for winter use. 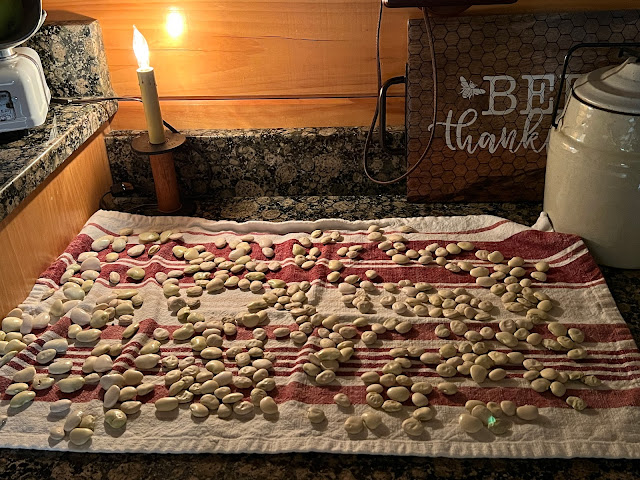 I headed out to the barn when I finished with the vegetables to drop off some treats for the chickens.  They were quite happy to see me! 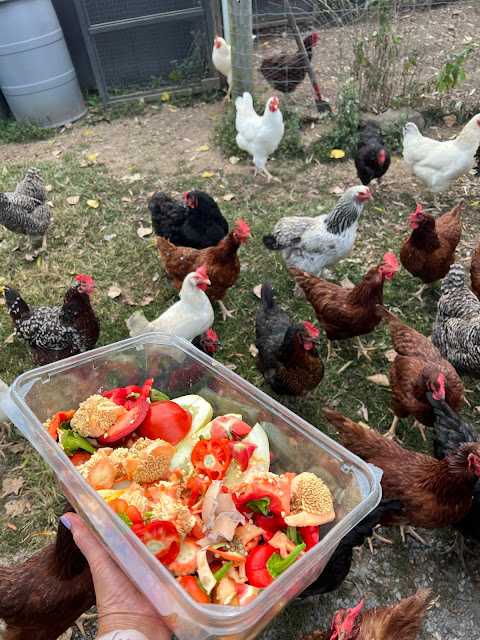 At the barn, I noticed that Daphne no longer had her fly mask on. 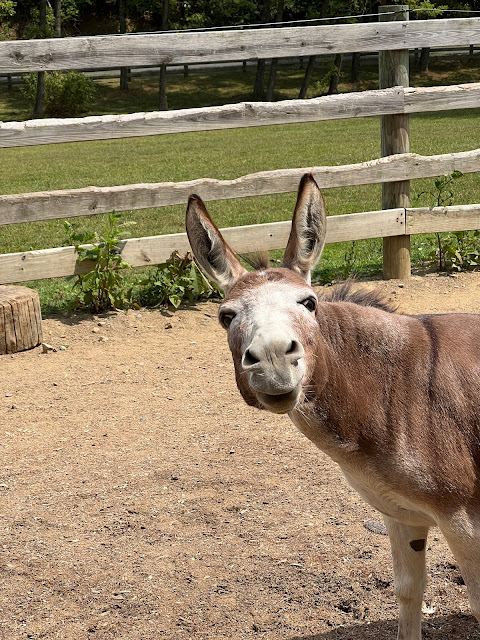 (I found it in the corner of her yard... in a wrinkled heap... removed without unfastening it.) 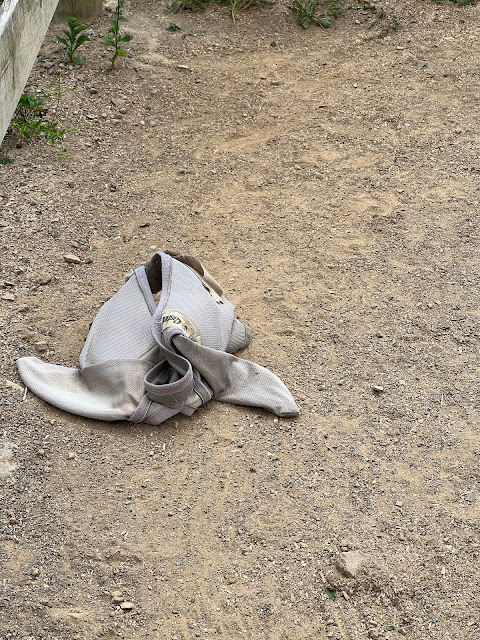 When I asked about it, she started making up a story... 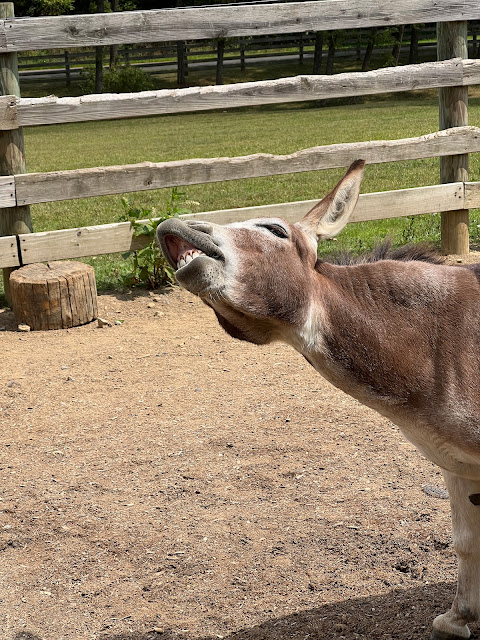 but, it was obvious she was fibbing! 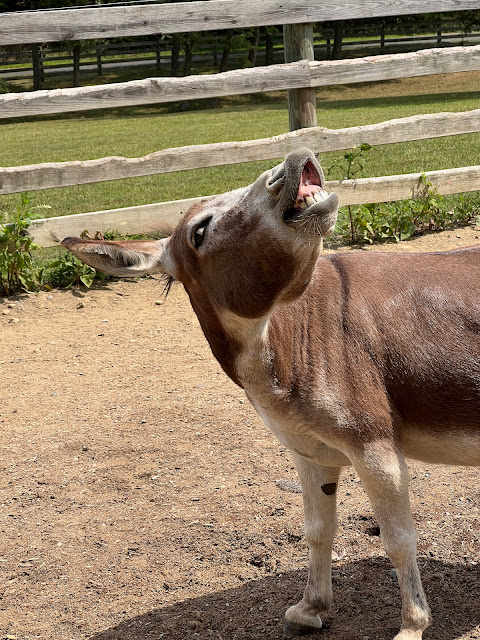 It was the perfect day to tend to these indoor tasks, as the weather remains uncomfortably hot and humid.  Gardening is saved for early morning hours. 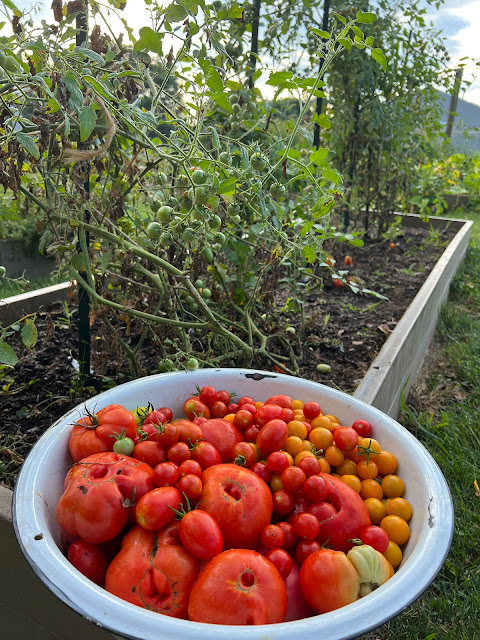 I awoke last night at 2 AM and went out to the barn to let the horses back in.  That way, their grazing is finished by the time we do morning chores.  Everyone is so much happier with this arrangement. Although I will admit, it' s a bit hard to get back to sleep after being outside in the middle of the night.  Hopefully these days are short-lived and we can get back to our old schedule. 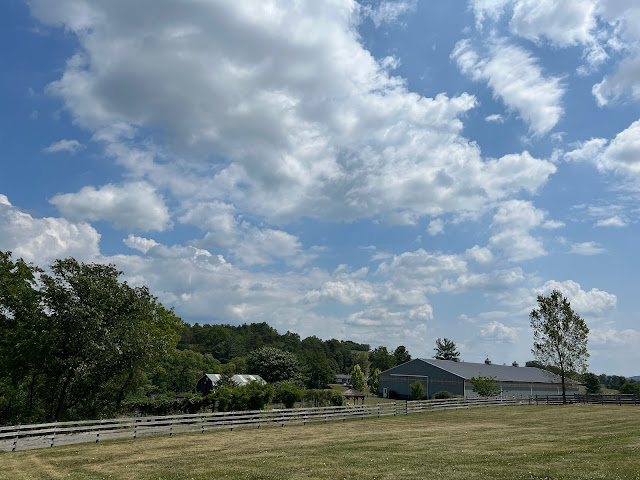 I've been gathering seeds from flowers and vegetables to save for next year.  So, while I was involved with inside tasks, I downloaded a seed packet template and made some seed packets to store my seeds for next year. 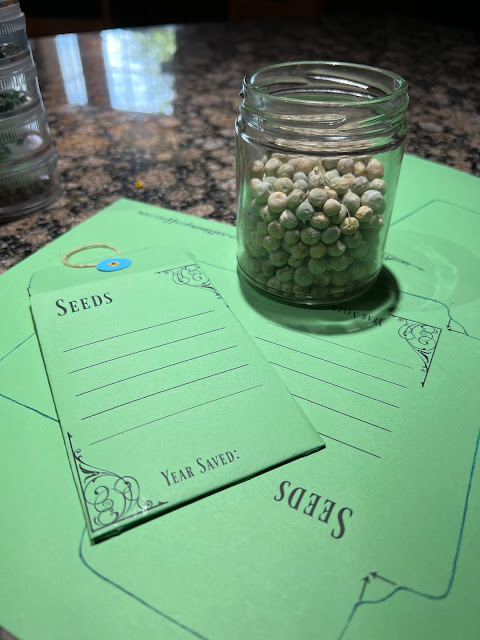 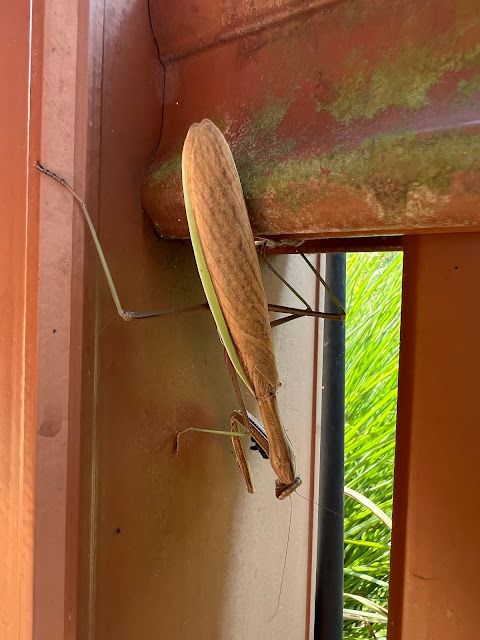 Whew!  That was close!

Oh, and thanks for sending a little rain our way. 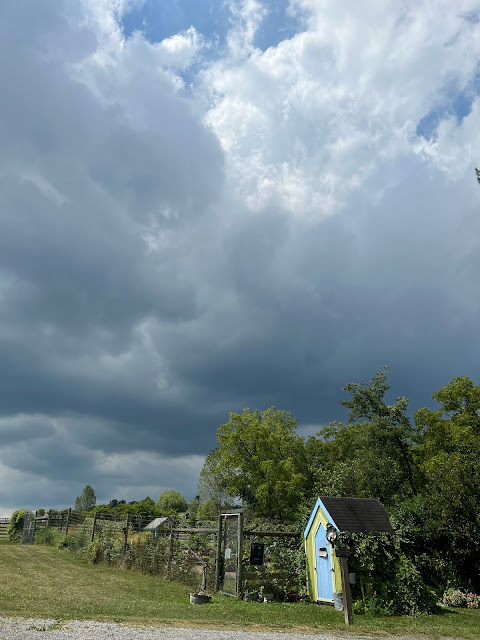 We had a brief spritz that lasted about a minute.  It was just enough to moisten the deck... not enough to help out the plants, though. 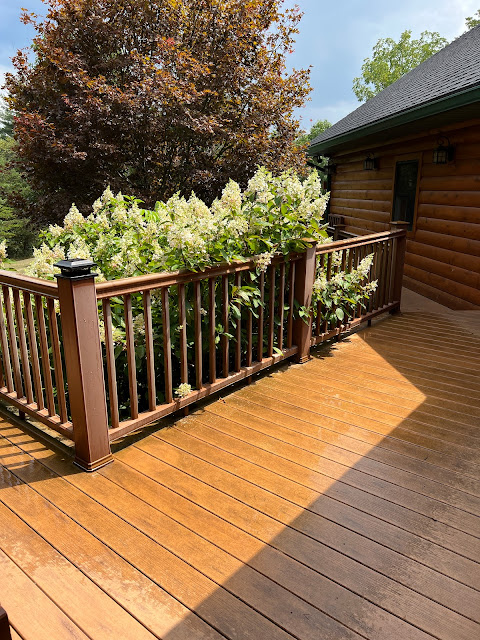 PS:  want to know something you could never buy in a grocery store?
A wrinkly egg.  I'm sure it would not make it past quality control. 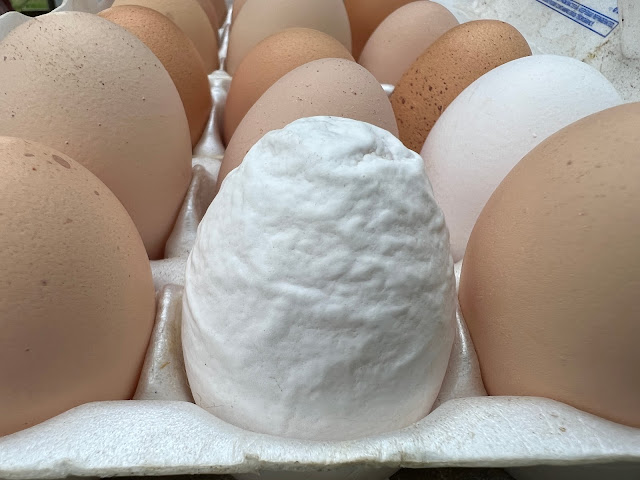 Why is it wrinkly?  According to what I read there can be a couple causes.  One may be due to an aging hen, another if a hen had infectious bronchitis at one point of their life (ours are quite healthy)  Regardless, wrinkled eggs are perfectly safe to eat.
PS:  Last evening we had a 23 minute storm that gifted us with ⅓ of an inch of rain.  YAY!!

Chris T said…
When you roast the tomatoes do you add ny oil, garlic etc? I have a bumper crop to deal with too.

Ann said…
Another roasted tomato question, this time about how you use them later. I'm wondering about how much liquid is left in them and, therefore, how you actually use them for cooking with and sauces and so on. Thank you.
August 10, 2022 at 8:54 AM

littlemancat said…
We may have had some overnight rain, but definitely had a
short one hour plus power outage which I slept through. The microwave and stove clocks told the story.
Love Daphne's story telling!
Mary
August 10, 2022 at 10:34 AM

James and Brigitta said…
Yikes, I never knew that about the Praying Mantis. I read up on it and even large orb-weaving spiders will do the same! Gosh, the animal kingdom is not for sissies!
August 10, 2022 at 11:21 AM

ladybug loves lilacs said…
I was wondering about the roasted tomatoes also and if you put anything on them for roasting? You may have mentioned before but how long and at what temp do you roast them?

Hard not to believe Daphne's story, she is so cute telling it!

BTW, I was just reading the article in this issue of Country Woman about Maven Haven. Wonderfully done and I love the pictures!
August 10, 2022 at 1:02 PM

Debbie, Timber’s mom said…
I do love the early morning bird songs and last night was cool so I went to sleep with the window open. The sounds of the crickets and night bugs was womderful!
August 10, 2022 at 2:05 PM

This N That said…
Those tomatoes look so yummy..
Love the Daphne vignette..very clever..
Your veggies are keeping you busy..
Glad the Praying Mantis was relocated...
We didn't get the second round of rain but we head and saw it pass us by...very close...Glad you got some..Hugs

diane in northern wis said…
So glad that you got at least a little bit of rain. Praying that more will be coming your way soon....I'm amazed at how long you've had such hot temps! Hottest days of summer supposedly end tomorrow....August 11th....we'll see how long it takes to cool down for all of you! Glad you moved that praying mantis....they are nasty....keep an eye out in case he comes back towards yo9ur hummers. Hope you can report on cooler weather soon!
August 10, 2022 at 11:10 PM

diane in northern wis said…
I forgot to mention how hilarious your pics of Daphne were and your commentary....made me laugh loudly! Thanks Bev.
August 10, 2022 at 11:14 PM

Lynne said…
Our temps and humidity have finally given us a break!
Refreshing to open some windows for FRESH air! 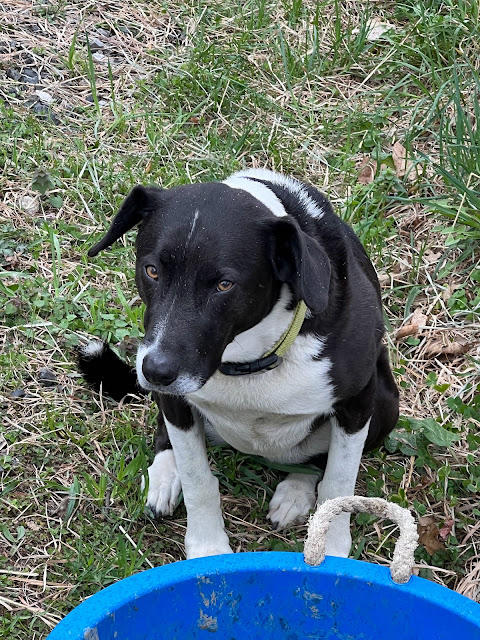 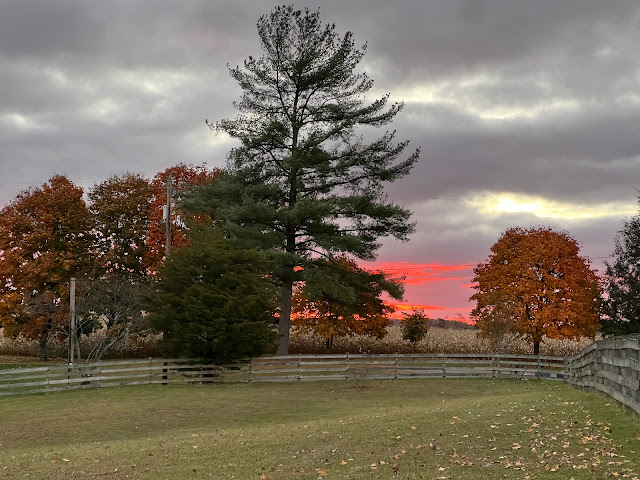