I believe the donkeys are tired of summer - specifically, the requisite fly masks.  Yesterday, Chloe also decided to lose her fly mask. 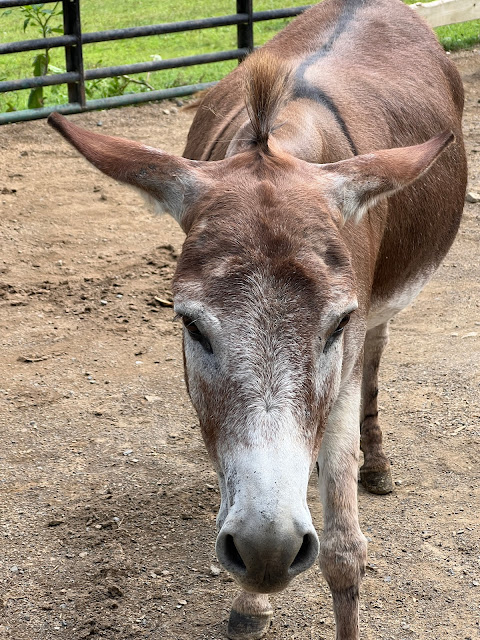 Donkeys definitely have a mind of their own!

Yesterday morning, after some early morning gardening (I planted fall sugar peas), and before the sun came out to warm the air, we took a walk.  Hubbs happened to spy this cicada on the ground, 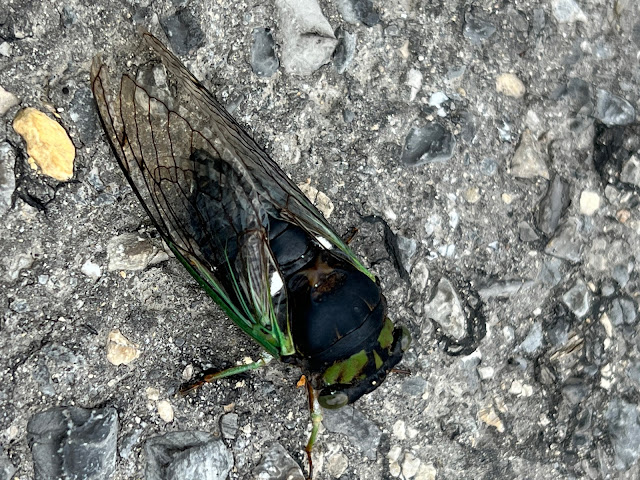 and I wanted to compare it to last summer's Brood X. 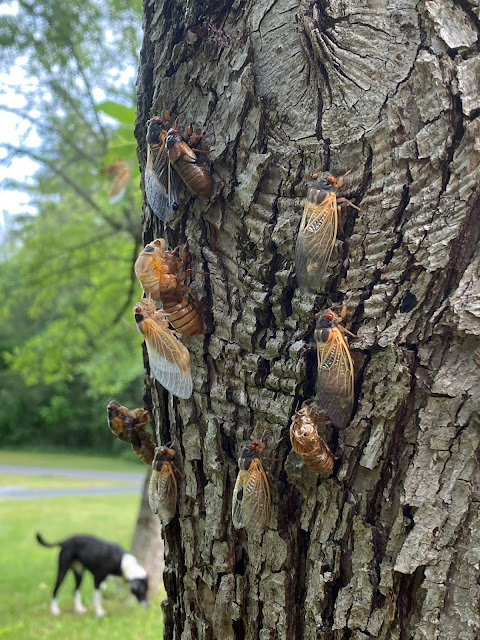 If you don't have cicadas where you live, let me tell you... these guys are big and a little creepy... especially if they fly into you.

After our walk Hubbs tended to some big jobs around the farm.  A few young black walnut trees were growing up next to the pasture fence.  Black walnut is toxic to equines, so Hubbs cut them down.  As he drug the skinny trunks to the woods, he noticed a piece of metal sticking up above the ground. 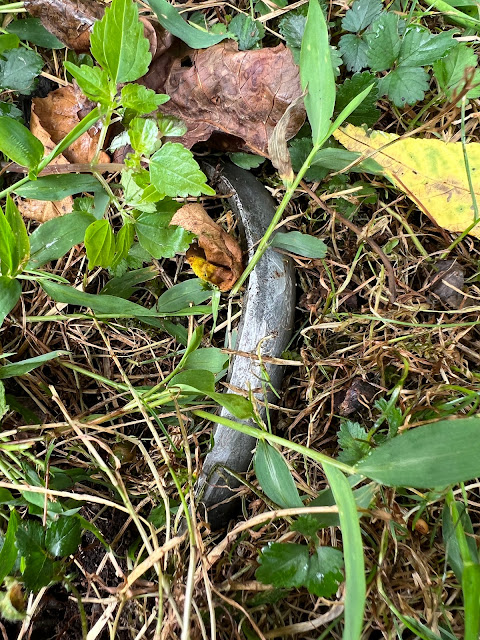 Curious, we grabbed a shovel so that we could excavate it.  I imagined maybe it was an old cooking pot of some sort.  In all honesty, though, it could have been just about anything.  A friend of ours once found an entire car buried on her land.  I hoped it wasn't that.  It was, however, bigger than a bread box! 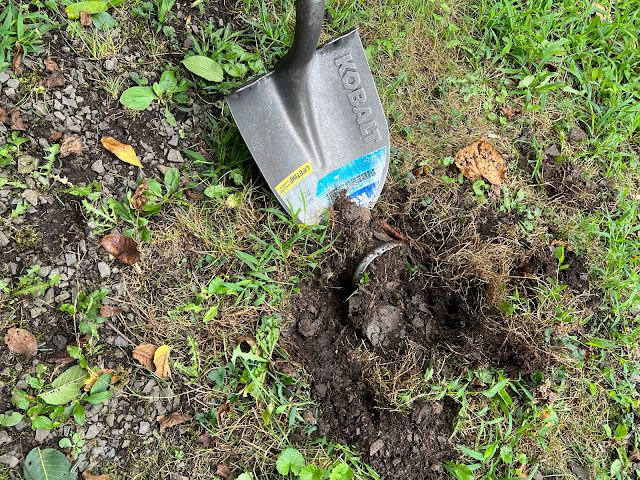 We have found in several areas on our farm, spots that were used as garbage dumps in many years past.  In these places we have found interesting glass and metal items.  This particular piece of metal ended up being a very heavy, cone-shaped object.  It was squished and looked almost like it had been a bucket of some sort, but there was no bottom to it.  It's a mystery. 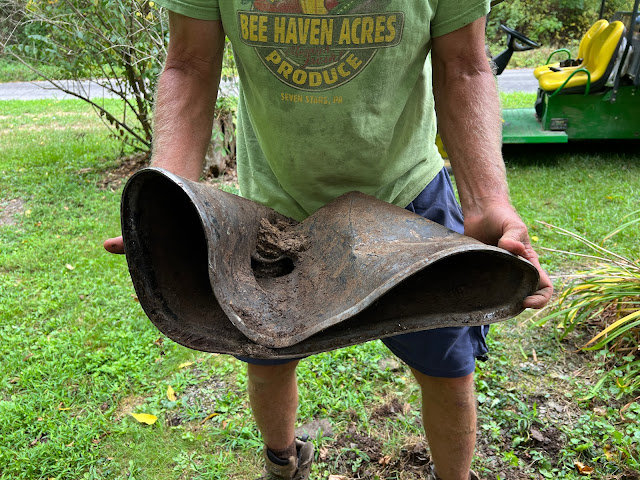 A significant cloud cover helped keep temperatures down for much of the day, allowing me to catch up on some animal maintenance.  I finished trimming sheep hoofs. 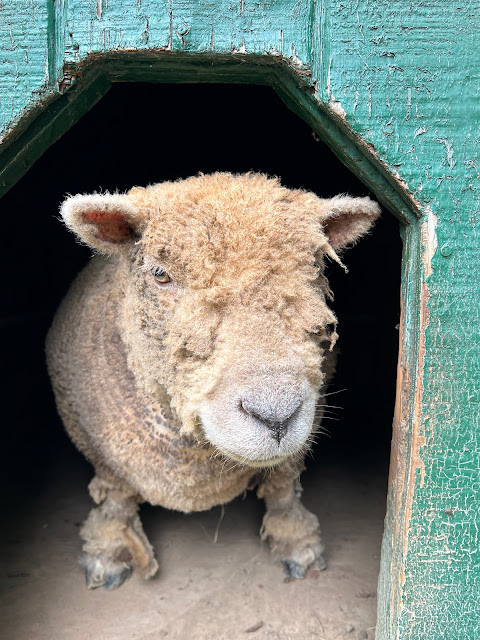 Then I began the task of trimming pig feet. 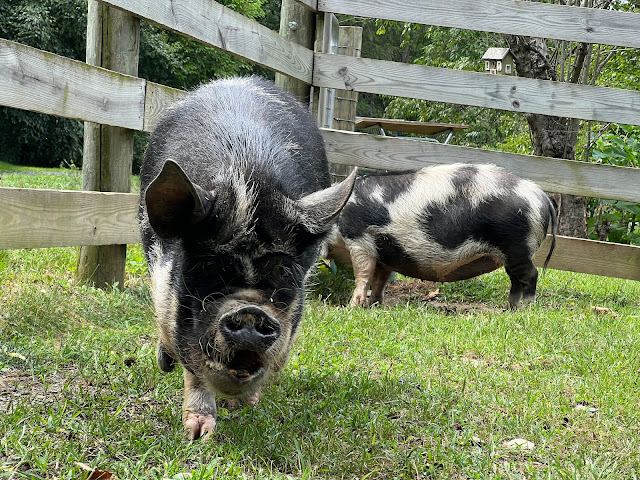 MaryAnn is always cooperative... a belly rub is all she asks in return. 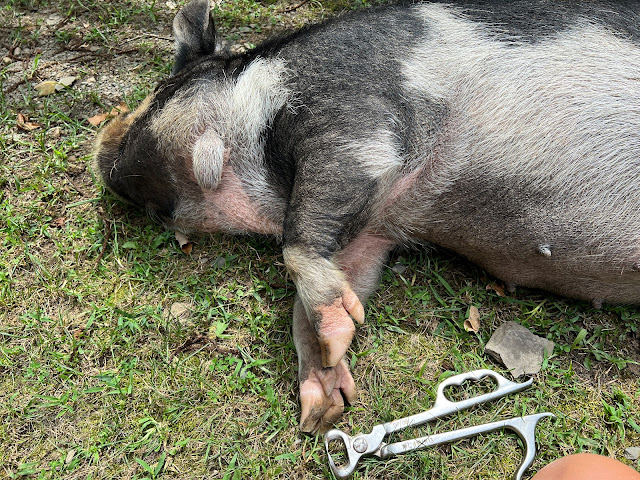 Ginger, on the other hand has to be in the mood.  She held her ground at the fence by the treat box and assured me that she would have nothing to do with hoof trimming on this particular day.  "Well, then, I am sorry to inform you that the treat box is closed for now" said I. 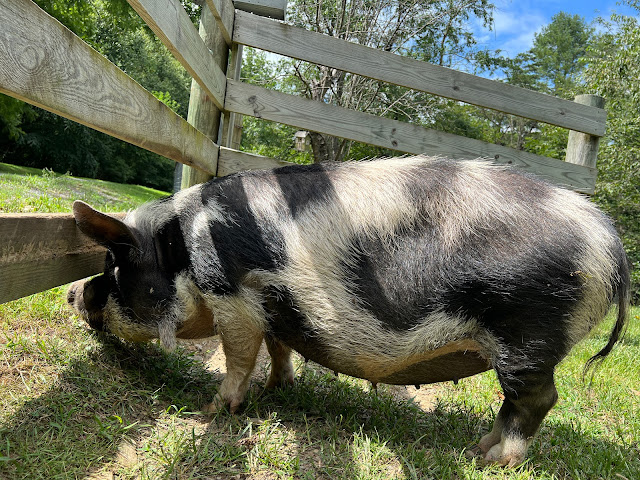 Two can play this game! 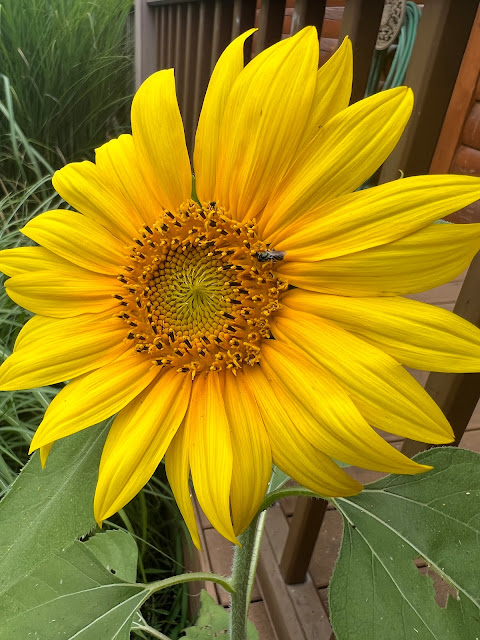 Yesterday's blog post generated a few more questions about roasting tomatoes.  Here is the long and short.  I cut my tomatoes in half or quarters depending upon the size of them... to make all of the pieces on the tray similar sized.  I arrange them on the tray skin-side down and drizzle or spray with olive oil. 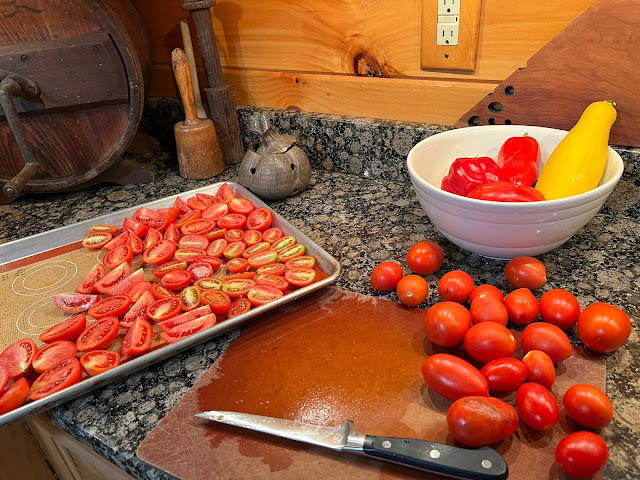 Then, I sprinkle with a little kosher salt.  I bake (roast) them in the oven at 400 degrees until they have lost about half of their moisture.  (They start to shrivel.)  They are not dehydrated, but they are concentrated.  I store them in silicone bags in the approximate amounts of either a can or two cans of store-bought tomatoes.

Then, during the winter, whenever a recipe calls for a can of tomatoes, I use a package of my own frozen tomatoes.  Now, obviously, the difference is in the fact that the skins are still on and the seeds are still present (although you can squeeze many of the seeds out before roasting) ...which does not bother me in the least.  However, I have also found that after cooking them in a recipe, it is relatively easy to pick out the skins.  I typically just leave them in... or, in the case of making tomato bisque, grind them up with a stick blender.

Alice said…
I roast tomatoes also but I add peppers, onions, and garlic . I put through a food mill. Then simmer to proper thickness adding basil and oregano to make spaghetti sauce.
August 11, 2022 at 7:25 AM

ladybug loves lilacs said…
Thank you for answering about the tomatoes. Going to do this and need to get some more silicone bags. I didn't know you could use them for freezing.

Sounds like Daphne and Chloe are wanting to take a break from their masks. I guess sometimes we all have days like this when we'd rather have treats than having our nails clipped. Lol. Though I treated myself to a self manicure yesterday.
Hope it's a lovely day on the farm today!
August 11, 2022 at 7:33 AM

sillygirl said…
I have done this for years and also told people how to do it - so easy and even not-quite-prime tomatoes are wonderful. It is like gold to use those in a winter recipe! Another wonderful thing about them is they take up less space. I could never have too many tomatoes!
August 11, 2022 at 9:28 AM

Lynne said…
Bright red color alone would have me roasting tomatoes.
Looks like and sounds like a winner.
(I have lost your daily postings, will have to figure out the WHY!)
August 11, 2022 at 9:42 AM

Patsy from Illinois said…
Tomato bisque is my favorite soup. You have made me hungry for it. For lunch is tomato bisque with grilled cheese. Yum.
August 11, 2022 at 10:02 AM

This N That said…
Interesting treasure that Jack dug up..Wonder what it was??
Still no rain..lot's of promises..
Hope you are enjoying this bit cooler weather..This morning felt like a day at the shore..cool and breezy..
August 11, 2022 at 12:22 PM

Eileen in Fla. said…
A spin-off recipe: Roast a meal-size portion of tomatoes exactly like you show,- crumble Feta cheese generously on top before roasting. A great side dish.
August 11, 2022 at 8:06 PM 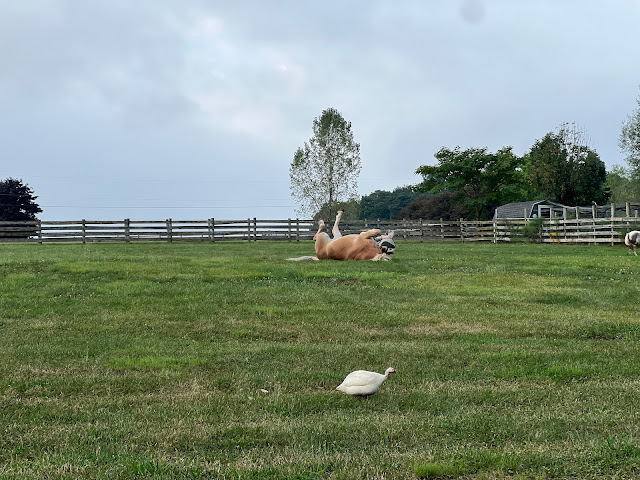 It's quite warm again right now, so we are back to early mornings in the upper pastures.   Yesterday morning gave the horses a bit of a break.  A dense cloud cover kept the sun away for much of the morning. Moonie enjoyed a good roll in the cool grass before settling down to grazing. I love this kind of morning.  Unfortunately it was followed by a hot afternoon.  I honestly don't know what to make of our pig situation.  I am on a bit of an emotional rollercoaster.  One day, I feel like it might be the last day... and the next day it feels like we are headed in the opposite direction. I was worried early yesterday morning.  Only Ginger came out to the treat box for graham crackers.  MaryAnn was no where to be seen. Happily, a little later, MaryAnn did get up for breakfast.  YAY!!  She had refused her dinner the previous night. Both pigs spent all morning napping.   Mid afternoon, I brought them a carrot treat and they both enjoyed that.    Then a few minutes later, MaryAnn came