The sun rose, almost undetectable, above the horizon, yesterday morning - its rays blocked by a thick layer of dragon's breath that had settled onto the land. 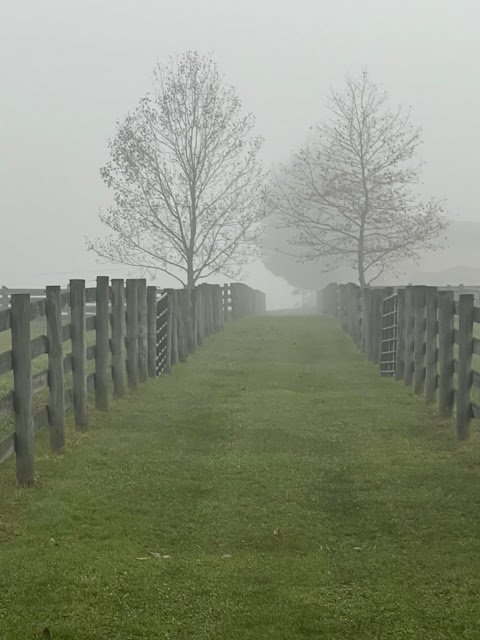 As I left the farm to take a trip to town, the ducks were waddling out into a grey foggy landscape. 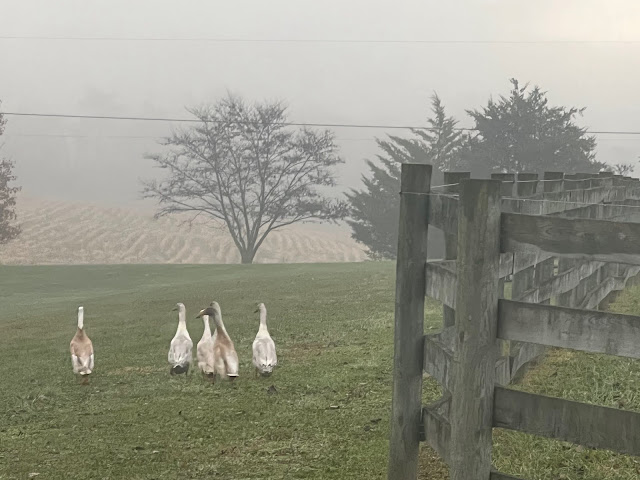 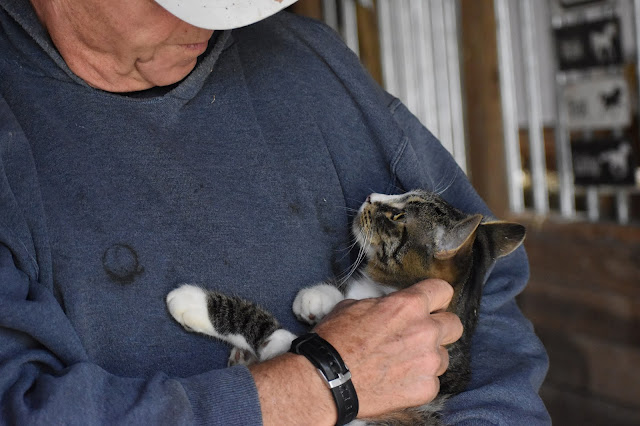 Because he had a few of his own errands to run, he kept the horses in the dry lot - knowing that he would not be home in time to bring them back in from the pastures. 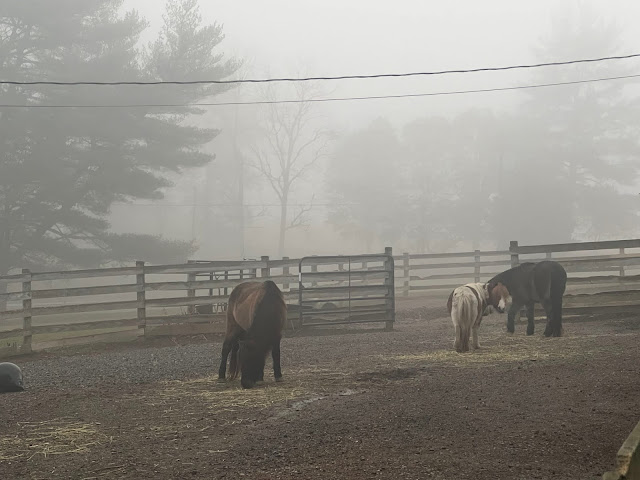 He assured them that they'd get their time outside... but it would be a little later.  By early afternoon, he and I were both back at the farm and the equines were given the run of the front pasture. 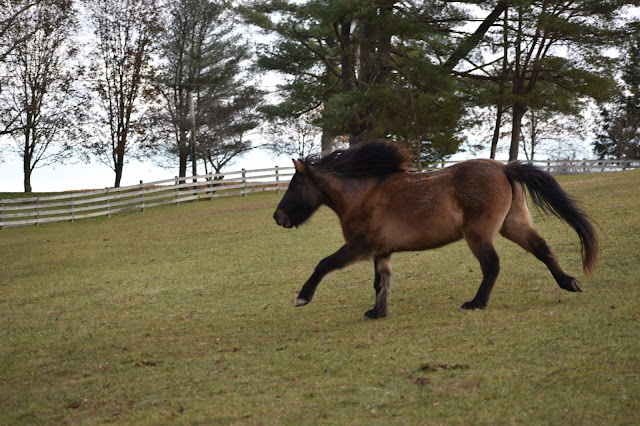 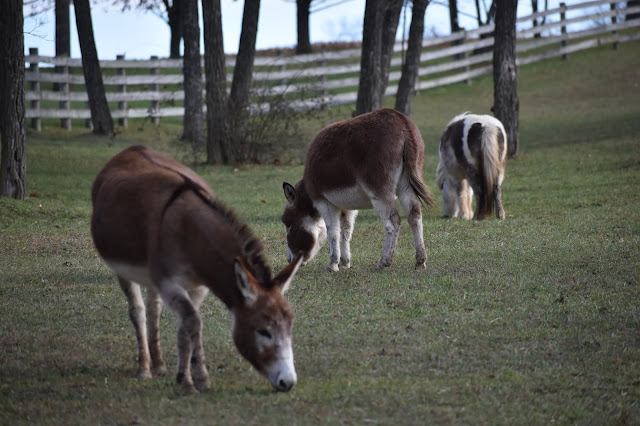 Typically, of late, we have been taking the horses up to the upper pastures and allowing the front pastures to be grazed by the pigs, sheep and donkeys. 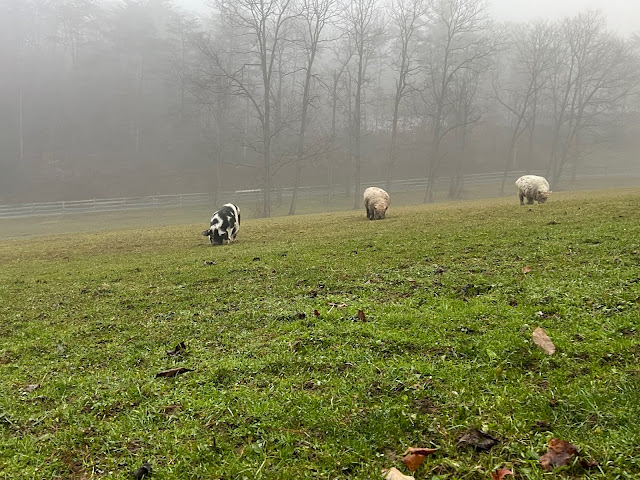 Yesterday, however, everyone was out in the pasture together.  I truly don't worry that my horses will be aggressive towards the other animals.  They are very tolerant and are used to seeing them on the other side of the fence. 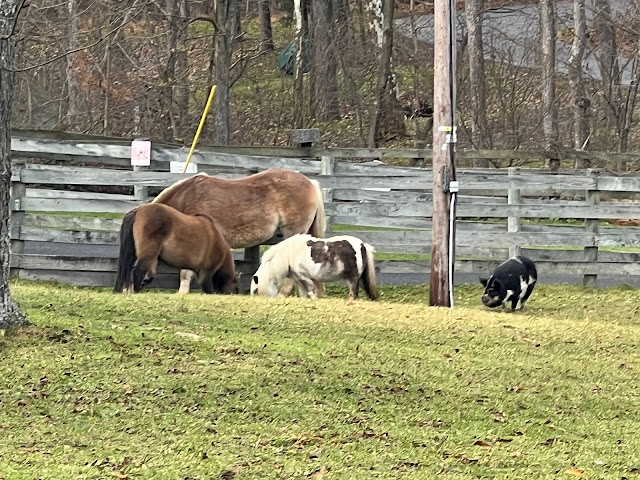 However, I don't think they were quite prepared for just how enthusiastic our Kunekune pig, MaryAnn can  be. 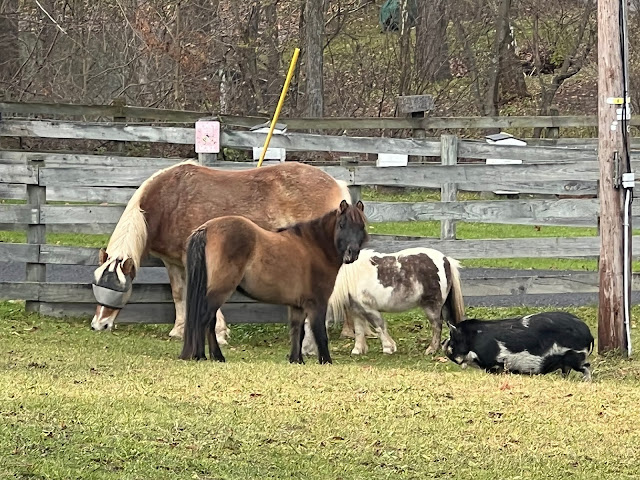 She followed the horses around, snorting her greetings - just trying to get them to join in her conversation. Pigs are very vocal and always enjoy a hearty conversation.  Horses, on the other hand, prefer silence.  Eating, to them, is meditative.  Horses can be introverts at times. 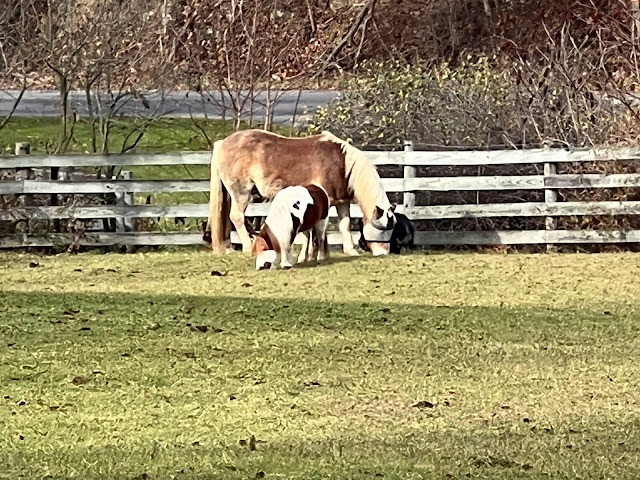 Pigs are the opposite of meditative, and the epitome of extroversion!  If they have a thought in their little piggy brains, you can be assured they are going to share it. 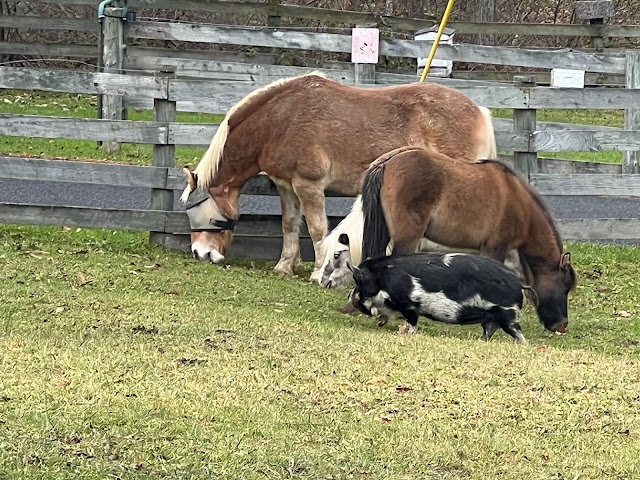 Moonbeam did, at one point give a little back-footed hop (not truly a kick, just a little hoppy warning), however MaryAnn was too enthusiastic to pick up on this subtle leave-me-the-heck-alone body language. She just kept on saying "Hey! Hey!" as Moonie subtly replied, "Talk to the hoof!"

I am happy to say that I am ready to begin Thanksgiving preparations.  I will be spending today with Tyler as he is off school.  Tomorrow the baking and cooking begin.  Oh, how I love making Thanksgiving dinner... almost as much as I love eating it!

Lastly, I wanted to show you what the chickens do when it is foggy out in the morning.  They congregate in the goat shed, which we have dubbed the coffee shop, and they catch up on all of the farm gossip.  Then, later in the day when the sun finally appears, they head out into the pastures in search of tasty treats.  This shed and the houses inside were painted a couple of years ago, but the goats rub their horns against the paint and wear it down in no time. 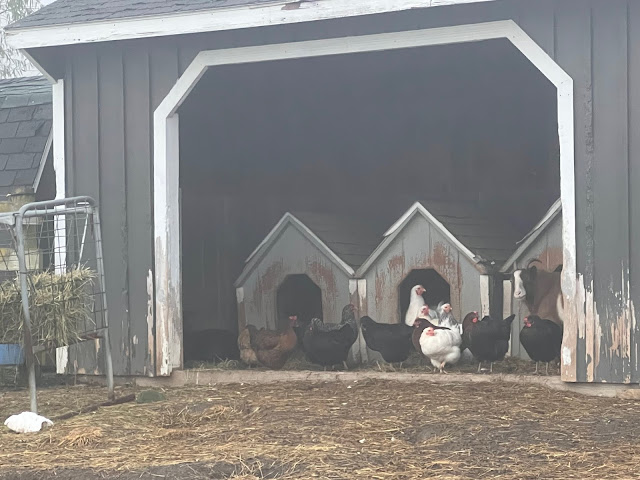 To Chris T… yes, we still have our house cat, Ivy.  She rules the roost and is asleep on my lap right now.

daisy g said…
Wishing you and yours a wonderful Thanksgiving. I am thankful for you and your marvelous menagerie! Blessings...daisy
November 23, 2021 at 7:07 AM

sheryl said…
Happy Thanksgiving to all at Bee Haven Acres.... I enjoy visiting with you each morning.
November 23, 2021 at 7:44 AM

Jody in Georgia said…
Starting my day with your posts helps make it a good day! Thanksgiving blessings to you and your family....human and non-human!
November 23, 2021 at 8:02 AM

Sally from Pa. said…
Happy Thanksgiving to all of at Bee Haven Acres. I look forward every day
to reading your post, it always starts my day off with such good feelings Blessing..
November 23, 2021 at 9:18 AM

ladybug loves lilacs said…
Happy Thanksgiving to you and all of your farm babies at Bee Haven Acres! Wishing you much to be thankful for today and everyday!

Love all your photos and videos you share. I'm more of a horse I guess. Not quite the Piggy extrovert here.

Marcia LaRue said…
Family, food and tons of fun on a Thanksgiving day ... what more does one require then these things? Maybe pants with an elastic waist! LOL
Looking forward to seeing pics of all your goodies!
November 23, 2021 at 11:14 AM

This N That said…
Lovely foggy picture!! Dragons breath..great name for it.
Love the picture of Jack and Ivy.
Have fun in the kitchen..I'm sure thing will be wonderful..Yum
Your home is always warm, welcoming and festive...Have Happy Thanksgiving..
Hugs xxoo
November 23, 2021 at 6:05 PM

THE BEARDED ONE said…
I JUSST HAVE TO CHUCKLE AT SOME OF YOUR COMMENTS/EXPLATIANS...THEY ARE SO NEAT
AND TICKLE MY SMILE/GIGGLE BOX...YOU RE SO VERY AMAZING...I JST LOVE THESE SOOOOOOO VERY MUCH....THANK YOU DEAR LADY AND HAPPY THANKSGIVING TO YOU AND YOUR GANG AND ALL WHO ENJOY THESE GREAT POST....KEEP SMILING !!!!! IT DOES WONDERS FOR OUR FAC....SMILING !!!!

diane in northern wis said…
Enjoy your Thanksgiving preparations! Sure is fun seeing Mary Ann out amongst the horses....sure glad she didn't get stepped on. Love your posts every day!
November 23, 2021 at 10:18 PM