Most days when the sun rises in a fiery red sky, there's a weather change on the horizon. 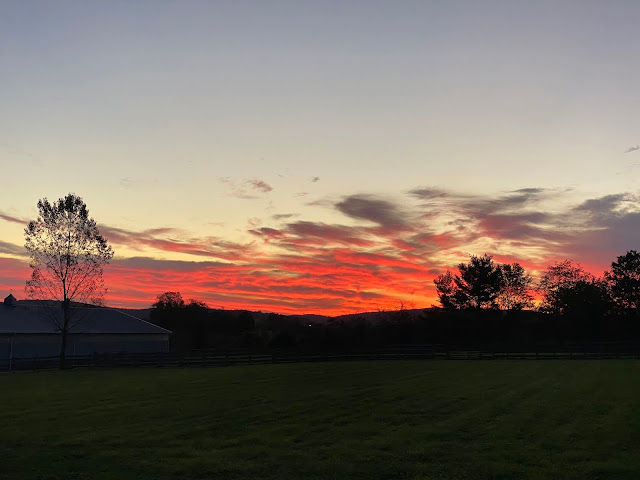 Yesterday, that was not the case. 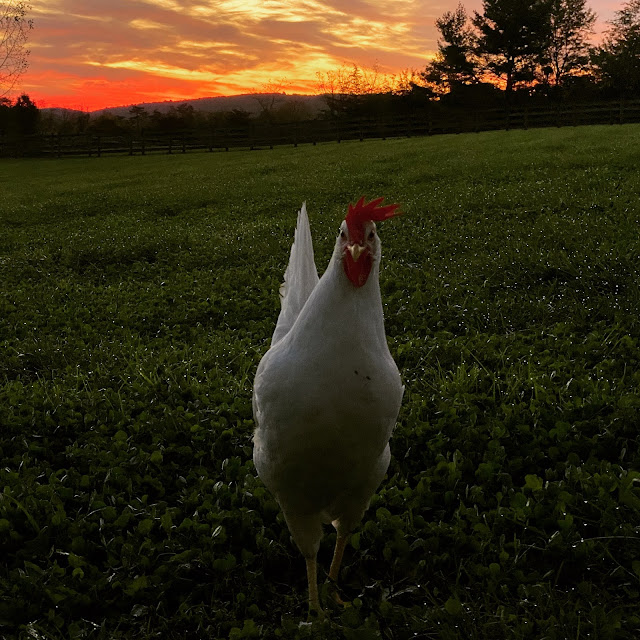 This beautiful sunrise heralded an equally beautiful Autumn day... blue skies, light breeze, plenty of sunshine and temperatures reaching the mid-seventies.  Perhaps a little warmer than I would like for this time of year, but I am not going to complain.  It was just  too beautiful a day to find any fault. 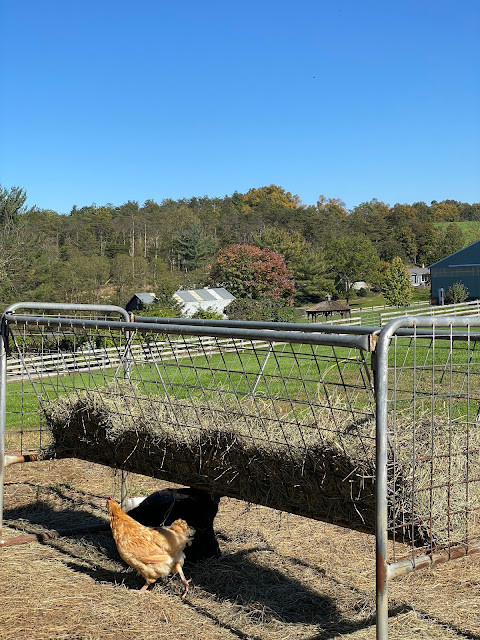 I arose early and headed out to do morning chores in the dark. 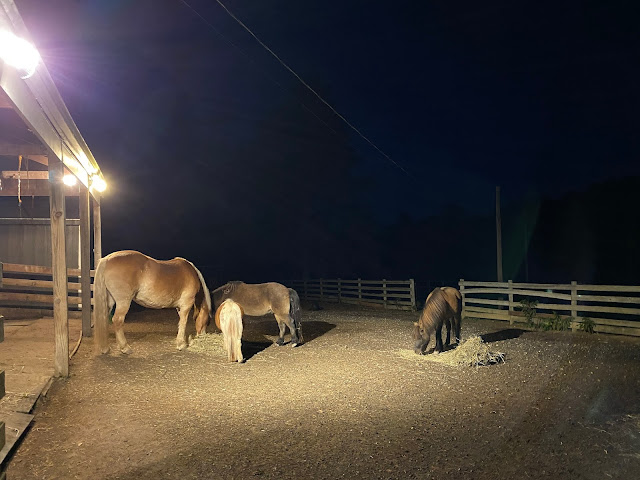 Because I had a mid-morning appointment and would be unable to get the horses back in from the pasture on time, I decided to instead throw them some hay for breakfast. 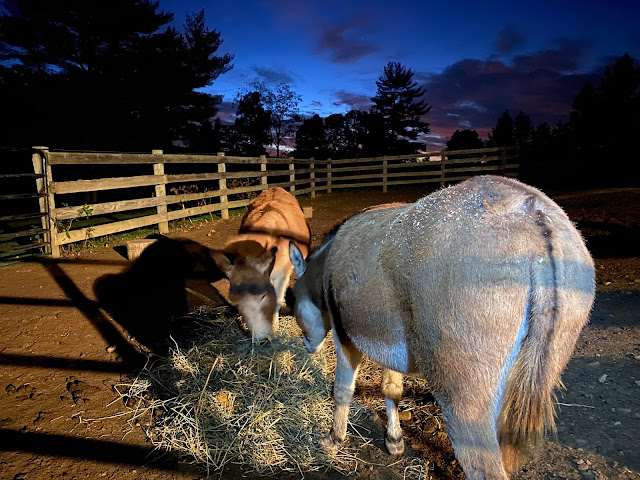 It's no surprise that they were not happy with this arrangement... a few snorts and foot stomping were offered in protest.

Equines are definitely creatures of habit, and to them, mornings are for pasture grazing. 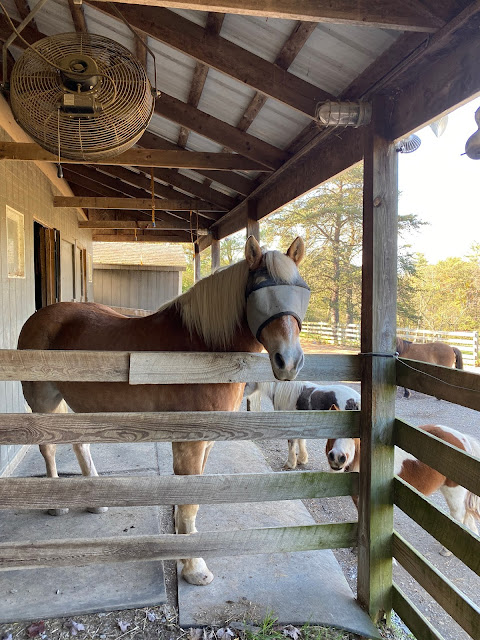 I was met with glaring eyes on every subsequent trip to the barn after that.  You can't see it, but under that fly mask, Moonie is giving me the stink-eye (but only one stink eye!) 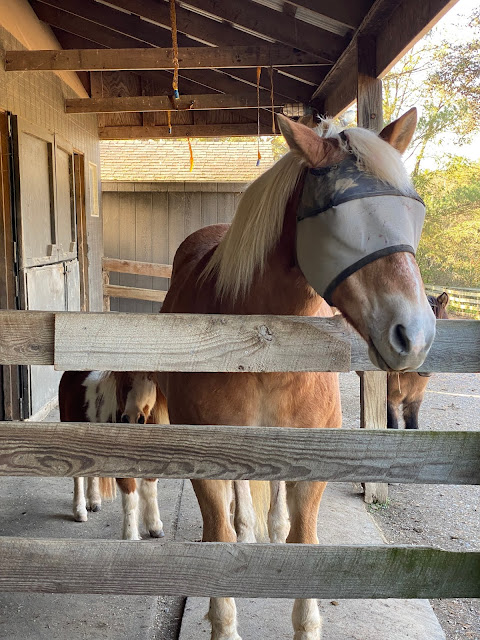 An hour before the sun began to set, I opened up the gate and let everyone out in the pasture.   Confused by this Backwards Day, they wandered out into the grass and happily began to nibble.  I assured them that the next day would return them to their regular schedule. 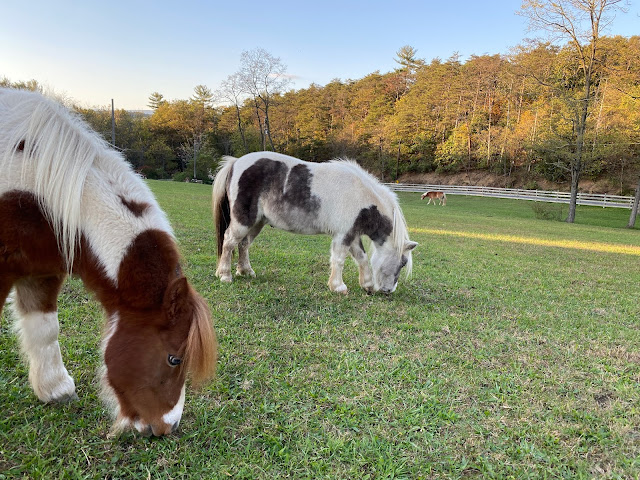 On my last daylight trip out to the barn, I happened upon these mushrooms... 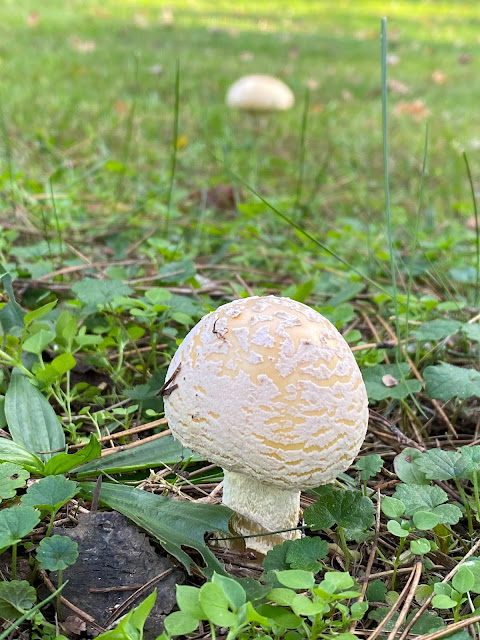 The one in the distance caught my eye... it's one I had not previously seen on the farm. 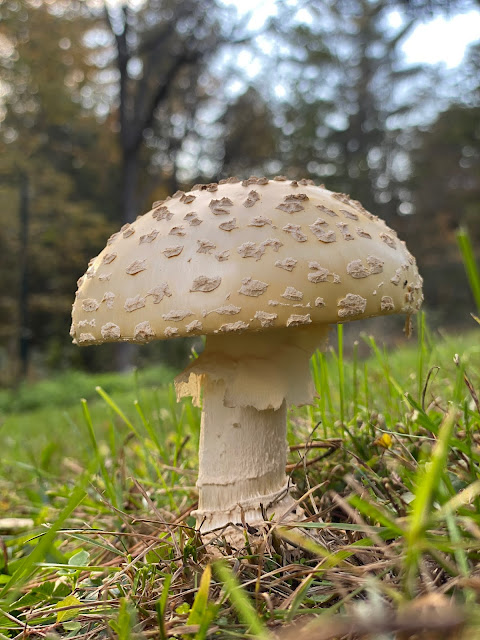 The shape was typical, however the surface shined like gold.  A little research told me that this mushroom is part of the Amanita muscaria family and is poisonous.  This mushroom is typically seen in a red color, but can also be found in this golden yellow.  In red, it is my very favorite specimen, so I am very happy to have found this one! 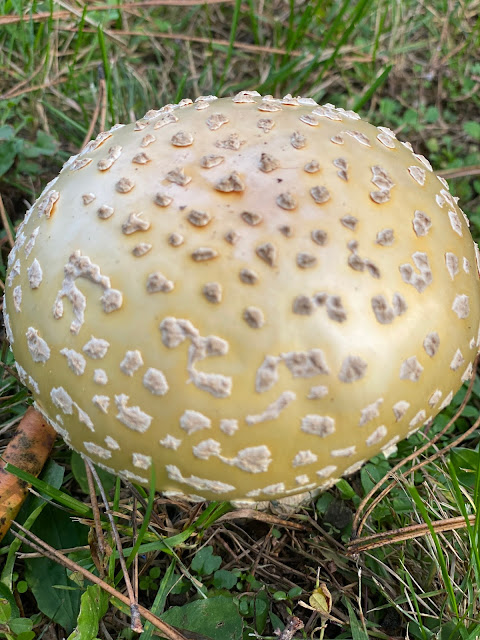 To Karen.... you asked when I learned to knit.  Several times during my life, I tried to learn to knit but was unsuccessful.  Then about 7 years ago I was inspired by a fellow blogger who did beautiful knitting.  I decided to buckle down and learn once and for all.  I consulted YouTube videos and challenged myself to learn the basics and then to keep learning new techniques.  Like everything... practice, practice, practice!

Anonymous said…
Your thoughts and pictures are always a wonderful way to start the day. You inspire me to persevere and find the the joy each fleeting day can offer. The talents you show in everything you do like your beautiful sweater make me want to try to knit once again. Our sunrises have been fiery red and amazing here also. Thank you for sharing.
October 21, 2021 at 7:42 AM

littlemancat said…
So interesting about the golden mushroom! Fantastic fungi.
And did you see the beautiful day moon this morning?
Mary
October 21, 2021 at 8:31 AM

Jody in Georgia said…
Good morning! As usual, starting my day with your blog makes everything better! It chases away an early morning grump quickly! Thanks, again, for sharing these "day brighteners".
October 21, 2021 at 8:50 AM

Patsy from Illinois said…
Oh my gosh, that mushroom is definitely for a fairy or gnome. Not sure it is big enough for a gnome to rest under it but the fairies could for sure.
October 21, 2021 at 10:03 AM

This N That said…
Yes, animals ,like some people, don't like their routine jumbled up..I sometimes find it refreshing.
Love fall sunrises and sunsets!!
Pretty mushroom..
Enjoy your day...Hugs..
October 21, 2021 at 11:58 AM

THE BEARDED ONE said…
GREAT POSTS....BEAUTIFUL SUNRISE AND GREAT COMMENTARY DESCRIBOLING EVERYTHING SO VERY WELL...THANK YOU DEAR LADY !!!!! KEEP SMILING !!!