It Seemed Like A Good Ideda At The Time...

I'll admit, my brain is always a swirly soup of "good" ideas! 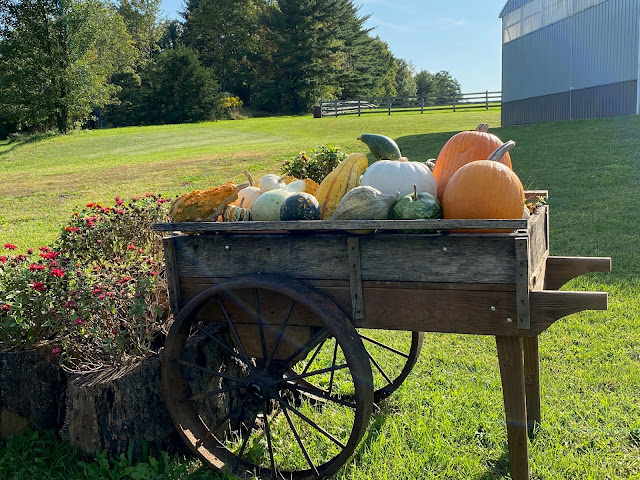 As a child, I called them "idedas".  Many an evening, after supper, I would announce to my parents, "Hey, I got a ideda!"  Naturally, that idea centered around going out for an ice cream cone. 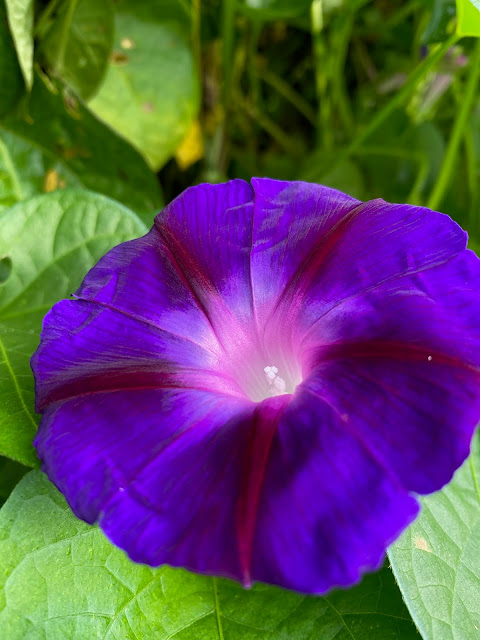 Last winter, as I was dreaming and scheming for Summer's garden, I got another good ideda.  "How lovely would it be,"  I thought to myself, "to plant morning glories on the cattle panel tunnel trellis in the vegetable garden.  After years of gardening, I am beginning to pare down the different kinds of produce that I plant, carefully weighing work vs. benefit of each type of vegetable.  This summer I knew that I could afford to give up a little vegetable space for something eye-catching. 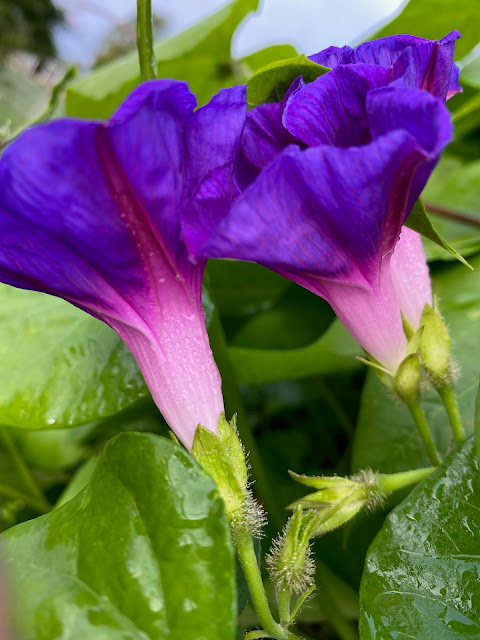 And so, I planted every known variety of morning glory along the edges of the trellis.  By mid-summer, the trellis was half covered in vine.  By summer's end, the trellis had become a verdant tunnel, awash with happy faces of fuchsia, deep purple, white, blue, and combinations of them all. 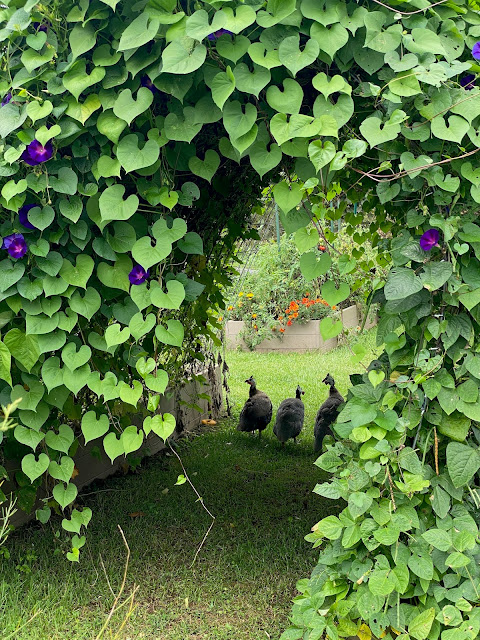 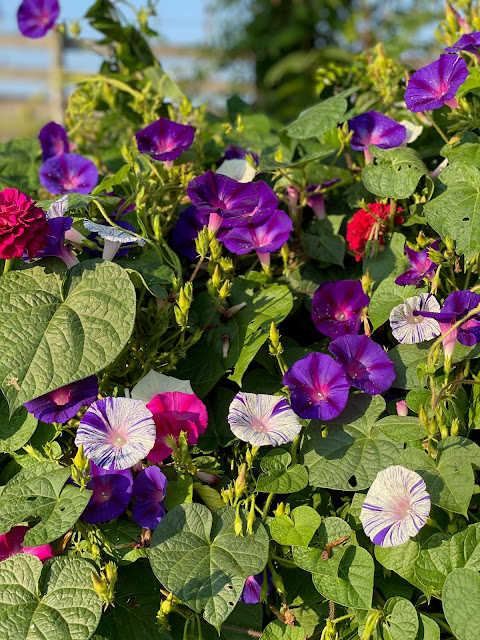 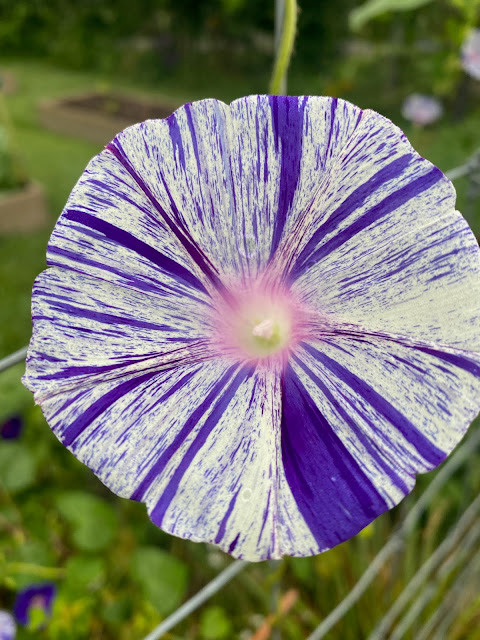 (Even though my rational self reminded me of how many baby morning glory plants I would be plucking out of ALL my garden boxes in the years to come.  I didn't care - it was spectacularly beautiful! 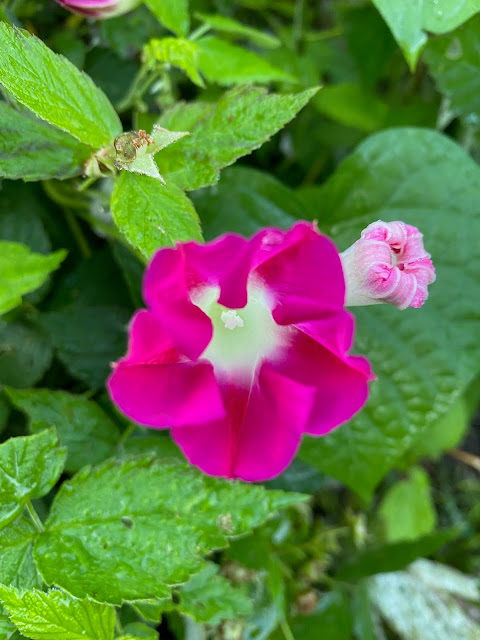 And then, this happened... and it no longer seemed like such a good idea. 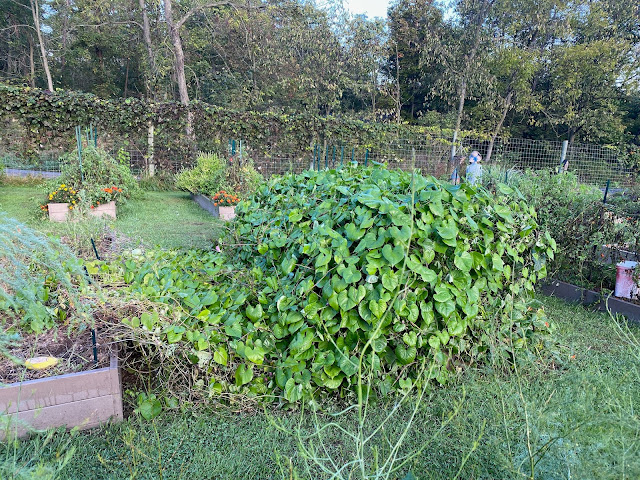 The weight of all those morning glory vines overwhelmed the arching cattle panels and forced them to buckle under the weight. 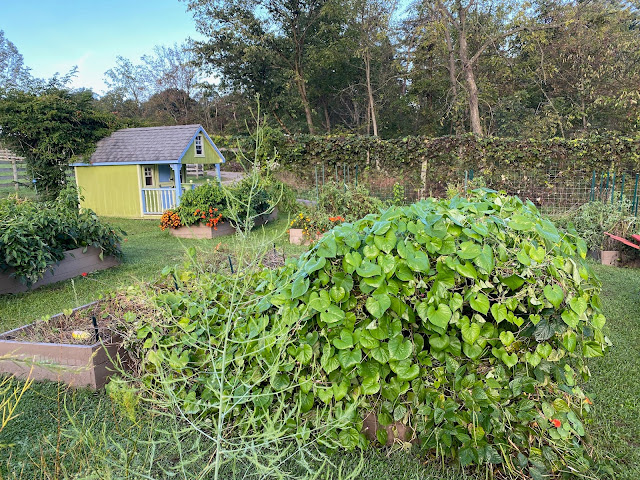 Now, the vines lie in a heap on one box;  while the rest of the arch lies next to the ground between the boxes.  It's too heavy to lift back up and repair. 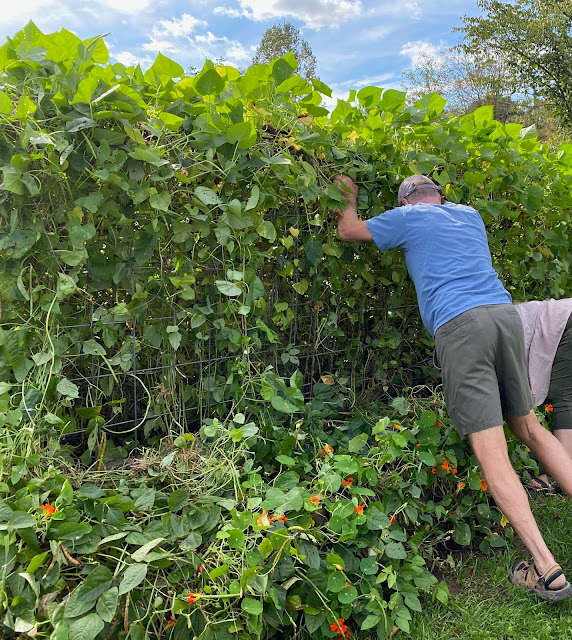 All that's left to do is to strip off all of the morning glories and try to salvage the arches beneath them.  In weighing the cost/price/benefit I must ask myself if the month-long awestruck feeling produced was actually worth it in the end.

By the way, we did find another abandoned guinea nest hidden in the midst of the vines, when we tried to life up the panels. 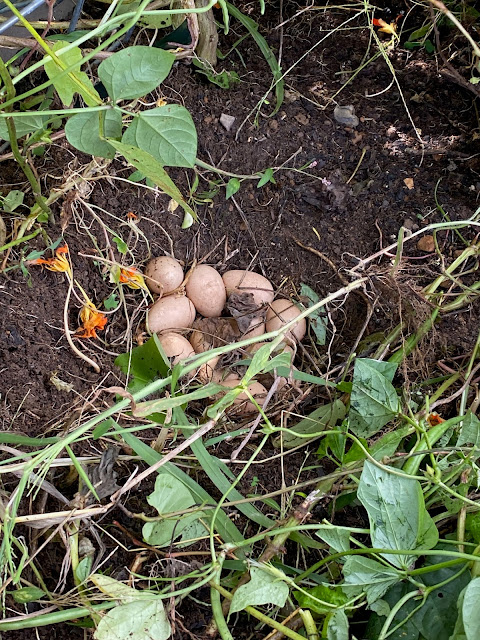 Hmmmmm..... still calculating.... ask me again, after I've cleaned up all those vines!  I may be placing this one on the list right beneath "planting ivy in my Fairy Garden"
(see last week's post titled "Neglect").

Apparently this is the week for things falling.  Yesterday, while out with the pigs, I noticed that one of the trees in our front pasture locust grove 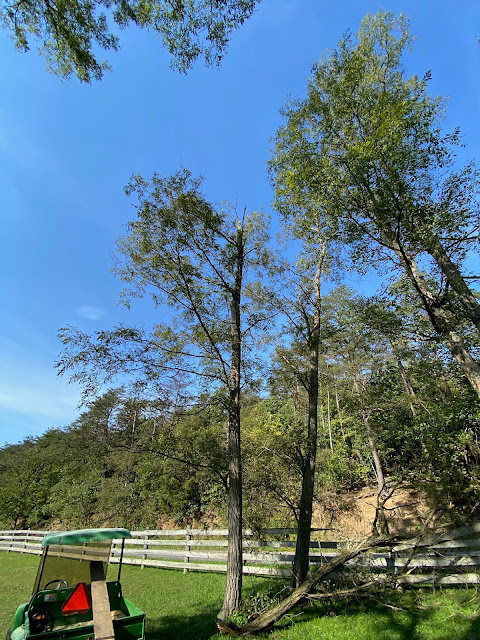 had lost a sizable branch, (on close inspection we found it to be the entire top portion the tree) and that limb had landed on the pasture fence... smash! 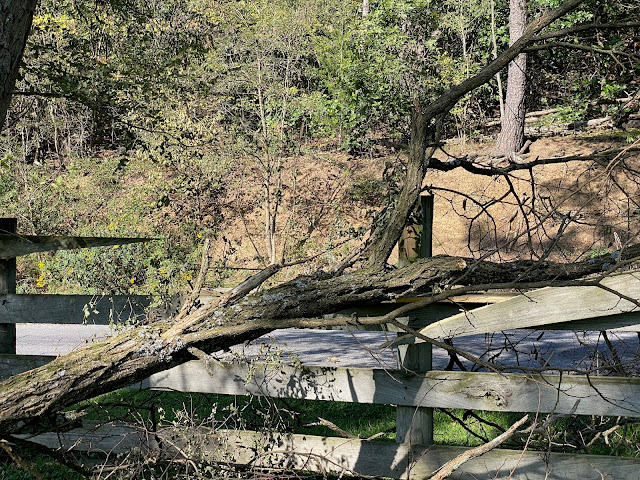 Hubbs quickly took care of the debris and fixed the fence. 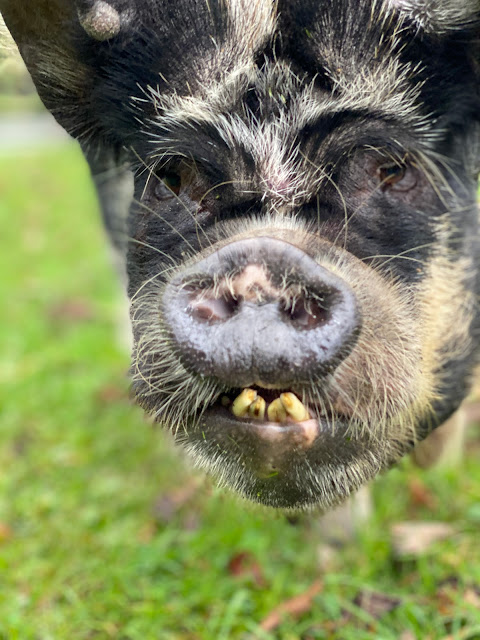 Meanwhile, I visited with the pigs and tried to entice Pete to meet the pigs. 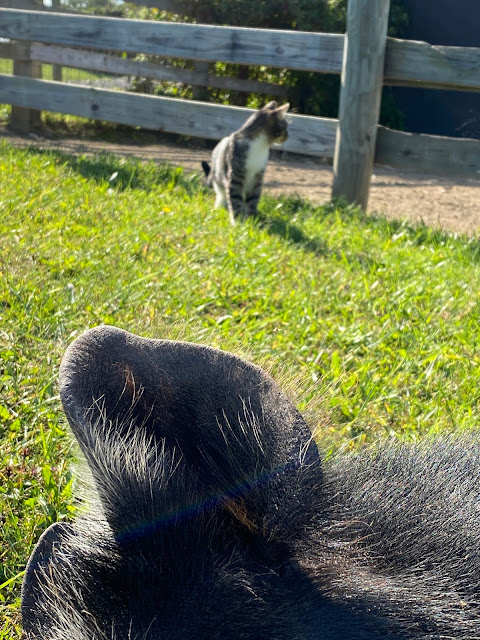 Nope - not this time! 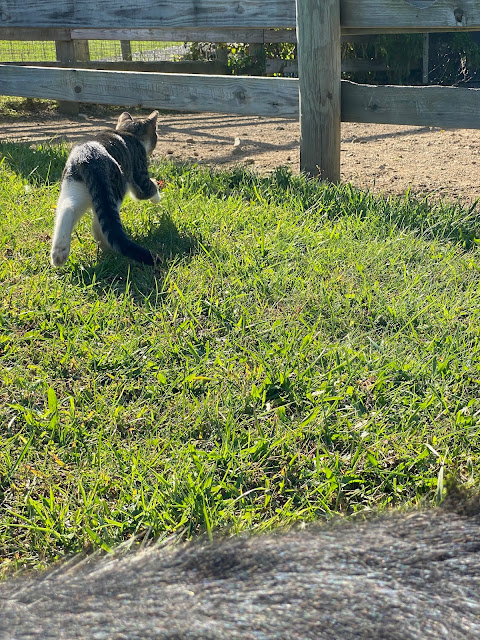 He's a love bug, for sure, but those pigs can be a little intimidating.  I'll give him plenty of time - but I guarantee I'll have him lying on top of the pigs one of these days. 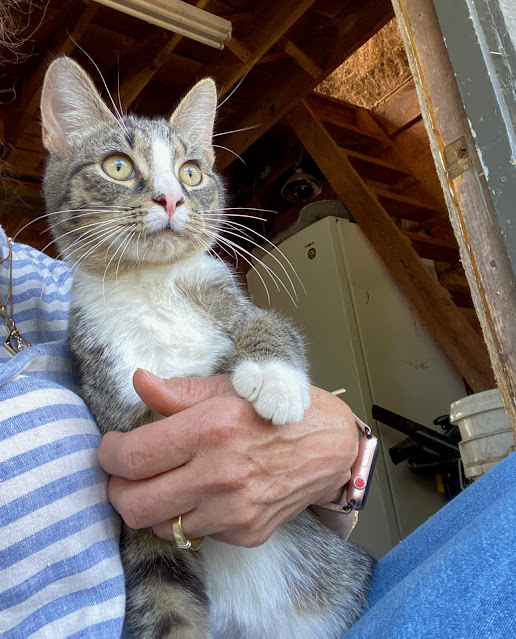 For the past several months, our egg supply has waned to the point of having barely any to share. 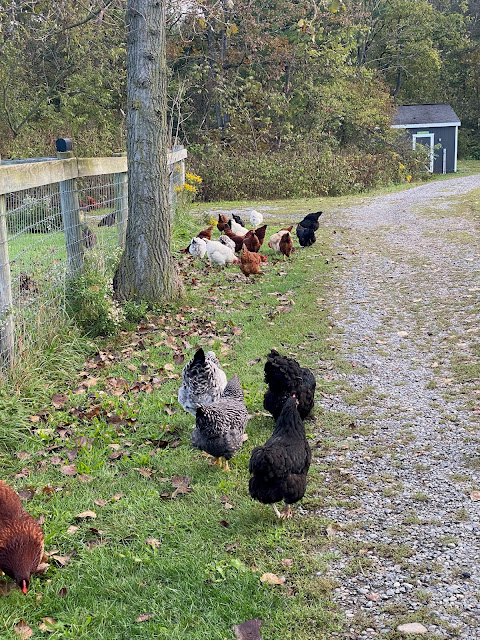 Now that the youngsters have begun laying, we have plenty again.  Yesterday I picked 2 ½ dozen from the nesting boxes.  Once again, family, friends, and even the food pantry will have farm-fresh eggs! 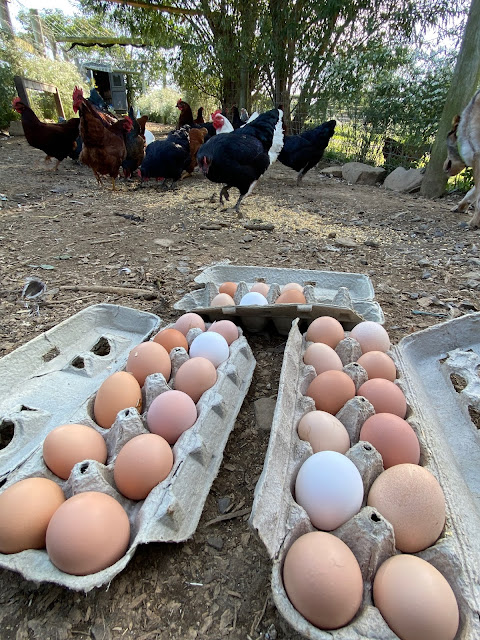 Lisa said…
Ya. I have those same idedas all the time. Like I planted English ivy. It took three years to establish itself. After year two I'm wondering why people find it invasive. Year three kicked in and now I know. It's been about 15 years and it's all over the place.
September 28, 2021 at 4:53 AM

jaz@octoberfarm said…
oh how i can identify with your morning glory catastrophe. pete the pig rider will eventually get up on the saddle for sure. wait until it gets a bit colder. he will embrace the big zeppelin-shaped heaters!
September 28, 2021 at 6:24 AM

Lynne said…
Your little girl “idedas” triggered my memory of one of the grand boys.
He would walk with me in the woods and I would be “yapping” away
about this idea and that . . . He must have listened to some of my chatter,
because it wasn’t long after when he was saying, “that’s a good ‘dea!”
Oh the memories . . .

I hope some salvage can happen to the arbor . . .
It was a good “idedas” “dea” learning experience!
The color you have enjoyed must have been wonderful.
Happy Morning Glories memories . . .

Pete is adorable . . . I am looking forward to his one day soon “piggy ride!”

This N That said…
I wondered about that when you entered the morning glory phase.. Vines are invasive and tenacious as you have found out.. One has to be careful of arbors as well.. sometimes things don’t go as planned. Last week was a whole week of that for me. Glad it’s over. At least I hope it’s over. Nice gentle rain todayEnjoy! Hugs
September 28, 2021 at 9:28 AM

Karla said…
A friend of mine planted morning glory on the side of her house and they found their way through the wall, into the house and across the fireplace mantle!!!
September 28, 2021 at 10:03 AM

Junebug said…
Here in Oregon morning glory is classed INVASIVE!!! yes, even listed of State site! I sure think they are pretty, but not planting!! Pete is adorable!
September 28, 2021 at 10:18 AM

THE BEARDED ONE said…
THE MORNING GLORY ARCH WAWS SURE BEAUTIFUL WHILE IT LASTED....SMIILING...AS USUAL..YOU HIT THE JACKPOT AGAIN ON A GREAT POST...SORRY ABOUT THE TREE AND ARCH CAVE IN...YOU HAVE SUCH AN AMAMZING WAY TO EXPRESS WHAT YOU ARE SHOWING US...GONNA TAKE MY BRIDE TO 58 YERS OUT TO EAT AT NOON...SHE FINALLY DECIDED ""WHERE"" SHE WANTED TO GO...THANK YOU OFOR THESE GREAT PICS AND THOUGHTS...HAVE A SUPER DAY AND KEEP SMILING !!!!