"Optimism is not the ability to live on the highest branch. It is the faith to learn to fly."

Just in case you have never seen a barn swallow up close... here are two of the babies - the last (two of five) left in the nest - ready to fledge.  They have become my favorite bird... just look at these precious faces! 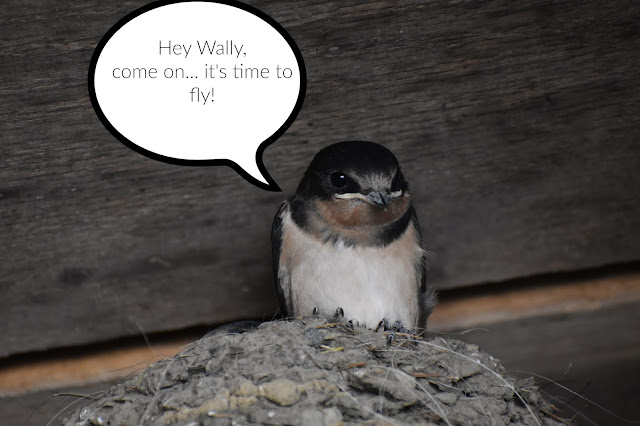 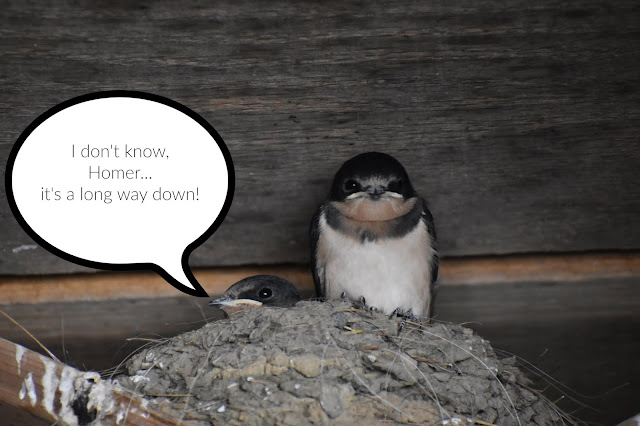 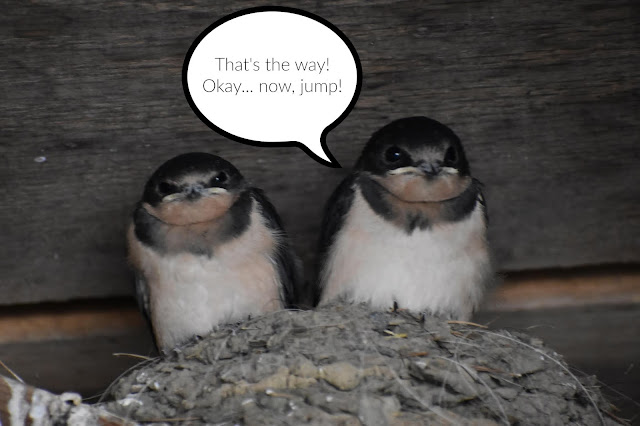 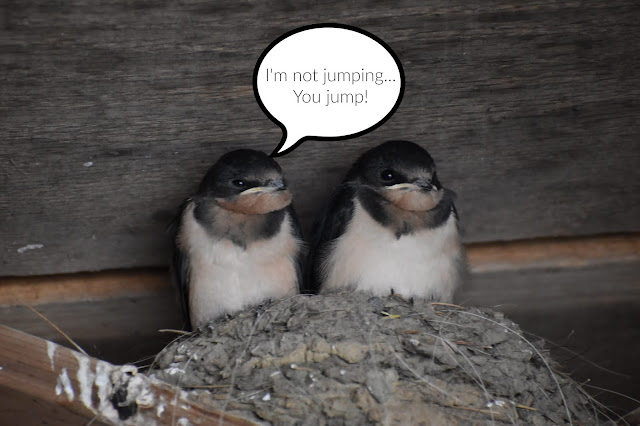 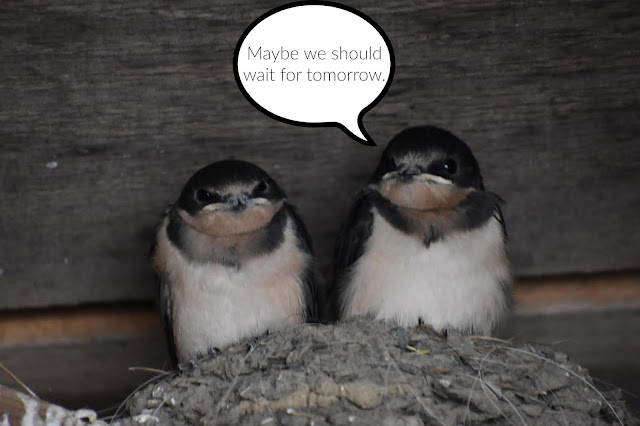 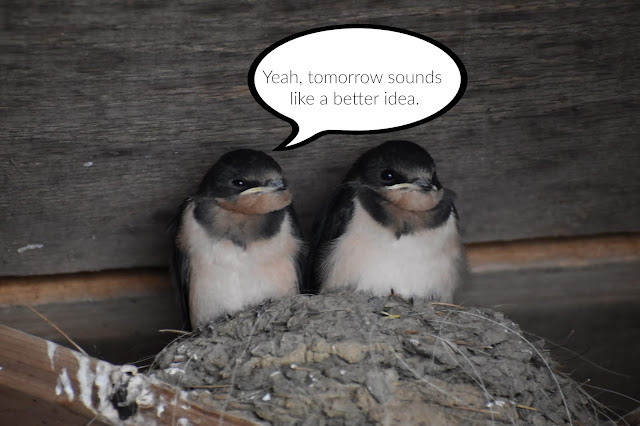 Mama Swallow spent the day flying in and out of the barn... with encouragement for her two youngsters who failed to launch.  Meanwhile, the rest of her family soared and swooped through the front pasture, busily catching their own meals.... insects.  After weeks of being fed by their parents, these youngsters are on their own to feed themselves.

You've got to admit... he is quite adorable! 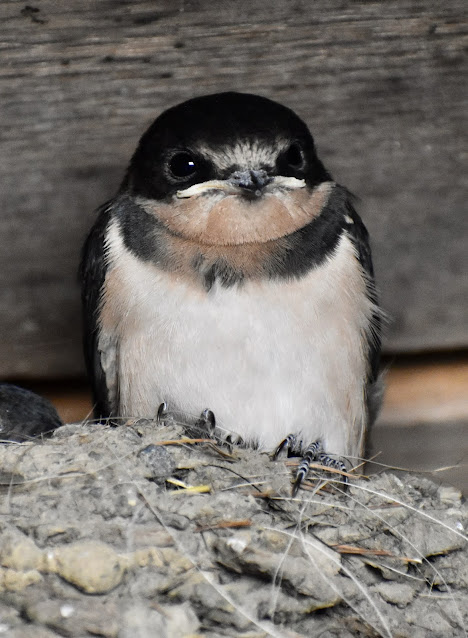 Later that day, as the sun set, pink, behind a distant ridge, I again checked on the two little swallow grumpy-pants.
They still had not budged. 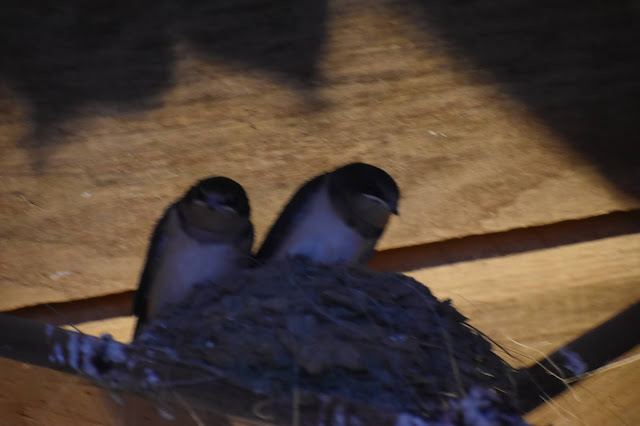 Curiously, this summer, the swallows had built three nests.  The two outer nests were never used... until now.  I guess they serve as extra bedrooms when kids get a little too big.

One of the siblings had returned to the nest on the left side and rested for part of the evening. 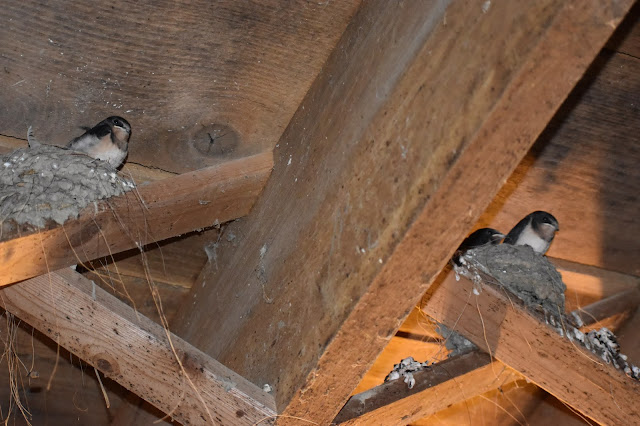 The fourth and fifth siblings were cuddled together on the telephone wire outside the barn, while their parents rested further down the line. 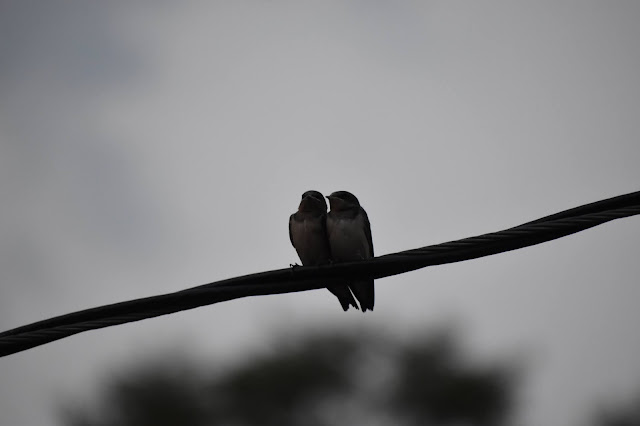 It is amazing to me how mature these birds are at such a young age.  Their chest feathers will darken into a russet color over time.  For now, this, and the fact that they are a bit chubbier than their parents, are all that differentiate them from the adults.
Upon returning to the barn the next morning, this is what I found... Homer and Wally had still failed to launch.  "Today's the day, boys!  Summon your courage - you can do it," I whispered. 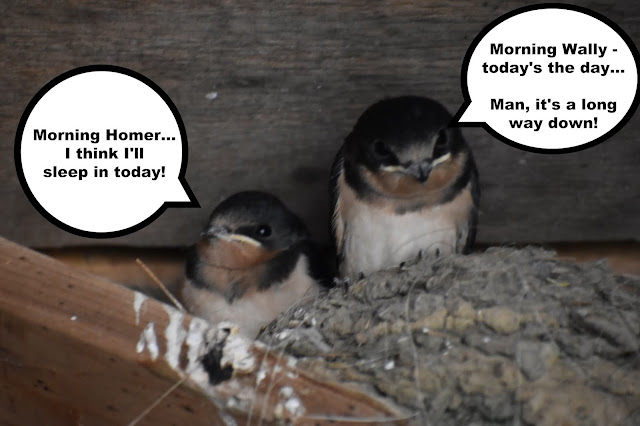 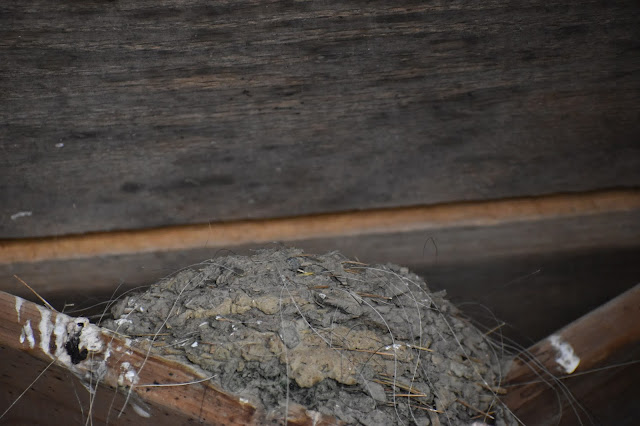 Meanwhile, outside, in the dry lot, the Swallow Family were busily practicing their aerobatics.  I counted them.... one, two, three, four, five, six, seven!  They had all made it!  I felt such relief for Homer and Wally. 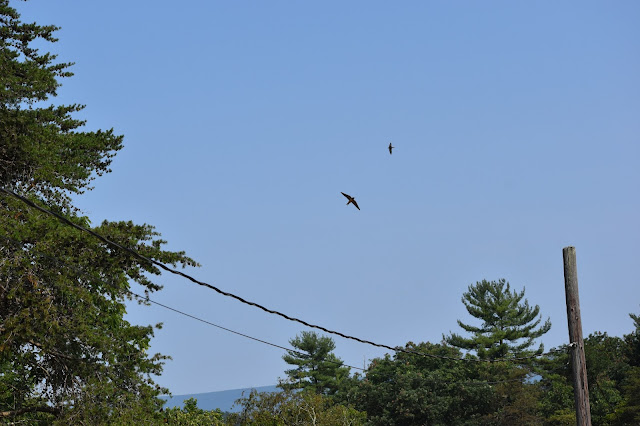 In the sky, they were gleefully soaring and gliding, then diving down low into the dry lot and in and out of the barn stall - all the while chitter-chattering encouragement and approval.  It was truly a joyous sight to watch. 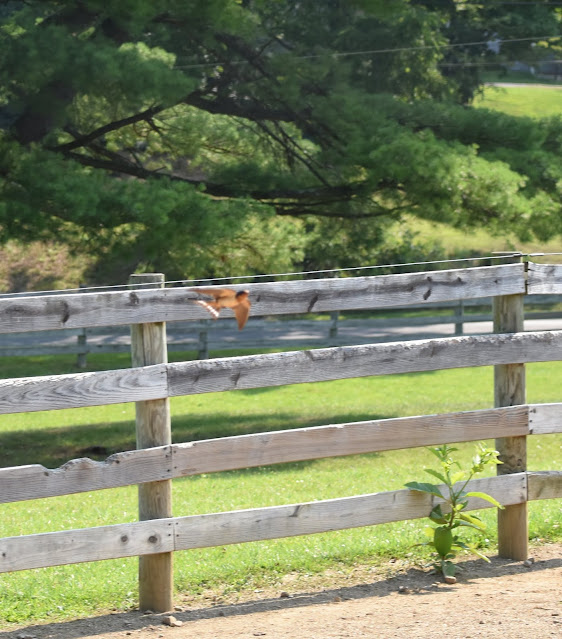 I called out my congratulations and "way-to-go's" for Wally and Homer who had finally taken the ultimate leap of faith sometime that morning. 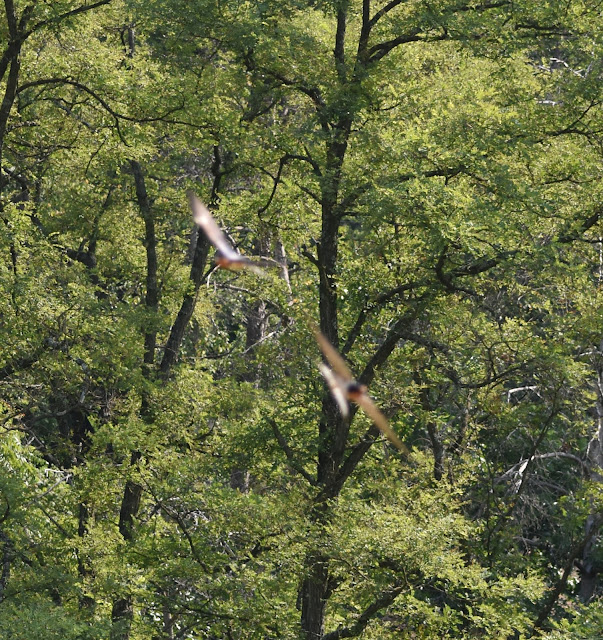 I imagine that birds learn to fly out of necessity... but somewhere along the way, they learn the sheer joy of flying, and do it simply because they can!  How liberating it must be to soar so high and look back to see that everything that seemed so important is really so small... the true value of changing one's perspective!
Every now and again, the swallows would swoop down past an unsuspecting barn kitty... a warning to not get any ideas!  What a force of nature these little birds are! 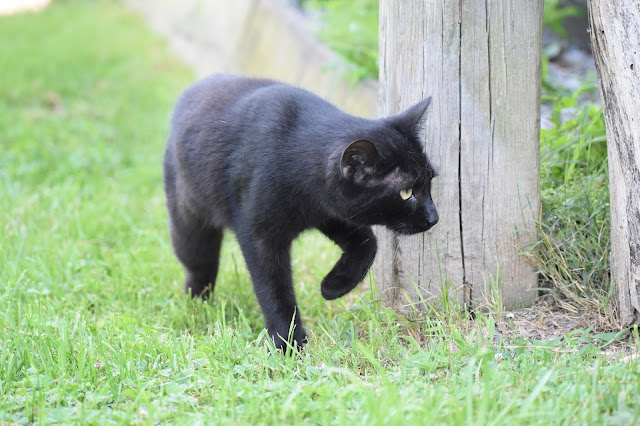 What a privilege it is to witness the miracles of nature!
PS: For those of you wondering about the black and white kitty that we spy here and there around the farm... nothing has changed.  We still see it from a distance every few days.  Looking back at old photographs I realized that I had photographed this stray kitty one day in the winter time cozily nestled in one of the kitty beds in the barn.  That may be as close as we ever get!  And of course, I cannot find that photo at this time.... sorry.
Also.... yes, wineberries taste very similar to raspberries.

colleen said…
I love the two swallows on the telephone wire. I think you should paint a picture of them, duplicate it and put it in your shop. xoxoxo
July 28, 2021 at 7:29 AM

Marcia LaRue said…
Today's post is like having your own little running commentary about an Olympic event! LOL Such a nice little pictorial series of those cuter then cute little babies ... afraid to try their wings!!
Thanks for the update on the other kitty ... at least it's getting fed and has shelter ... not much more you can do for it if it won't cozy up to you and the other resident kitties!!
July 28, 2021 at 9:03 AM

This N That said…
Swallows are probably my favorite bird. I think that happened when I used to get dive bombed while I was mowing the grass By several iridescent, sapphire blue ,beautiful swallows….It seemed like a game. Love this post. Such cute faces.. you should paint them. What a cute Christmas card that would make. Enjoy your day. Hugs
July 28, 2021 at 9:30 AM

Patsy from Illinois said…
Swallows are such pretty birds. On my folks' place, they had quite a few swallows and the cats would flatten out when they were bombed by the birds. My folks passed quite awhile ago now and thank you for letting me remember this.
July 28, 2021 at 10:16 AM

THE BEARDED ONE said…
AMAZING PICS CONCERNING THE BARN SWALLOWS...I NORMALLY HAVE 3/4 NEST/FAMILIES...BUT THIS YEAR I HAVE NOT FOUND THEIR NEST..COULD BE IN THE UPPER PART OF THE BARN..HAVE NOT BEEN UP THERE..BUT..THERE ARE BARN SWALLOWS FLYING AROUND AND I HAVE 2/3 FAMILIES OF MARTINS !!!

diane in northern wis said…
I so enjoyed your story of the little reluctant birds. Soooo glad they finally took the leap! Nature is amazing. How nice that you kept such a good eye on the nest and it's inhabitants. I hope that pretty black and white kitty will one day decide to adopt your family and home! You're such good hearts for putting food out for him/her. That's just one more thing that I love about you!
July 28, 2021 at 9:19 PM