It Should Come As No Surprise....

Based on our long history of raising chickens and ending up with more roosters than we can handle, it should come as no surprise then that yesterday as we were doing morning chores,

I opened up what used to be our old turkey house, which is now housing The Girls' two chickens Poppy and Posie.  I said good morning to the two hens, and picked up Posie for a little lovin' time.  She immediately hopped up onto my shoulder... 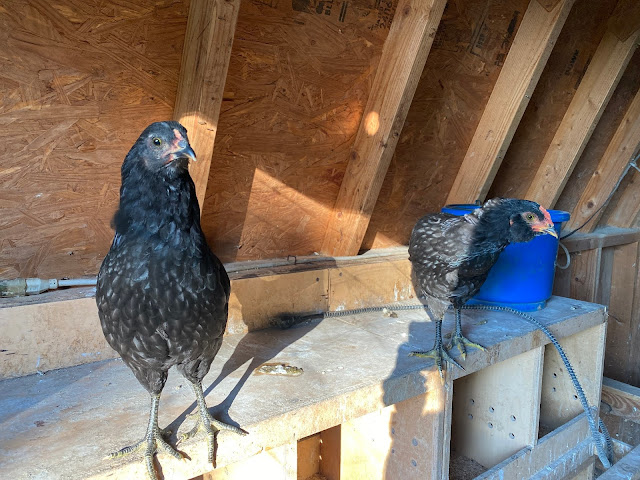 and pooped over top of the pony tail that was hanging on the left side of my neck.  Actually, she pooped three times in rapid succession... leaving my t-shirt with a couple of poop stains.  (Yes, I immediately headed to the house, jumped in the shower and threw my shirt in the laundry.) 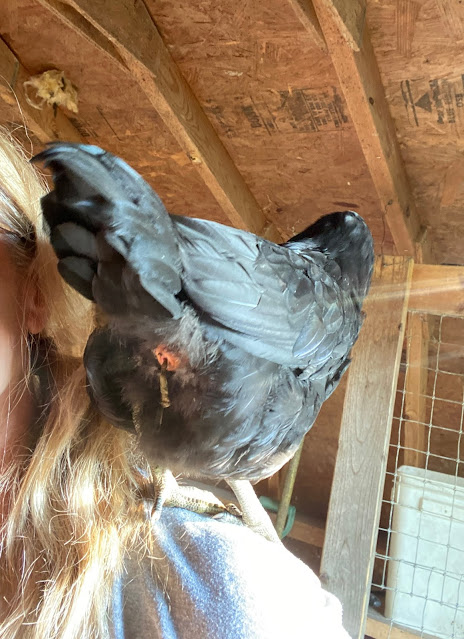 Meanwhile, Hubbs was opening up the rest of the chicken houses and out came our hens, our Roo, Elwood, and the teenagers.  Houses were cleaned, feed and water were replenished, and Hubbs moved on to check on Poppy and Posie. 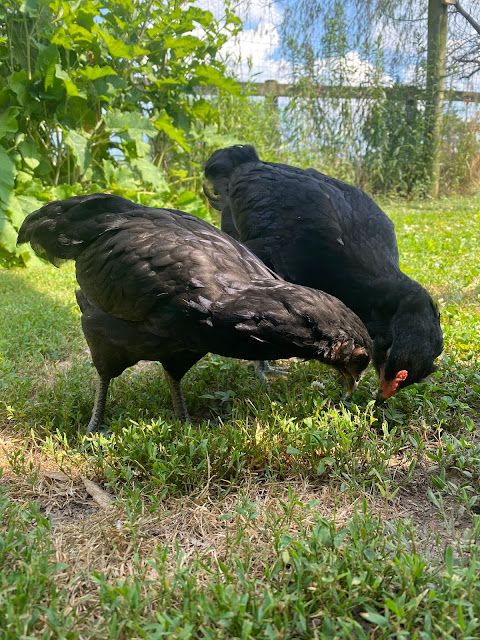 Now, back to the beginning of the story.... it should come as no surprise, then, that Poppy began to crow.  Poppy is much larger than Posie and has very sturdy (manly, you might say) legs. 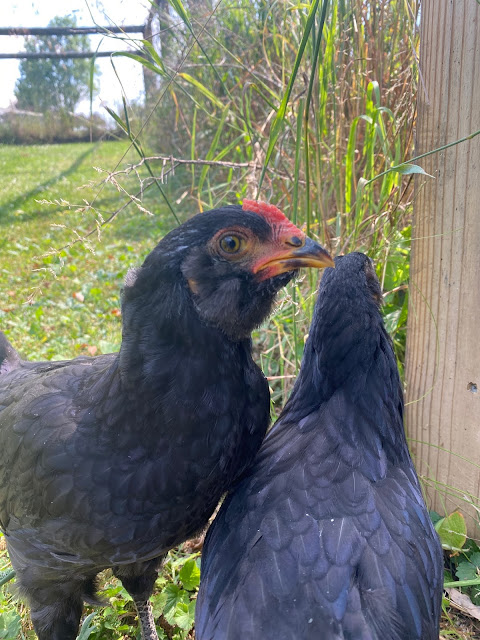 Yes, lovely Poppy (whom we all thought was just a big-boned gal) is indeed a rooster.... a rooster that needs a new name!  Sadly, Poppy will need to be re-homed with his white Leghorn brother, Big Boy.   Given our past experience with the competitiveness of Roosters, we don't want to take a chance on upsetting the apple cart.  Our Elwood is the perfect rooster... in part because he has no competition for his hens.  He is the only rooster he hears from morning til night... until now. 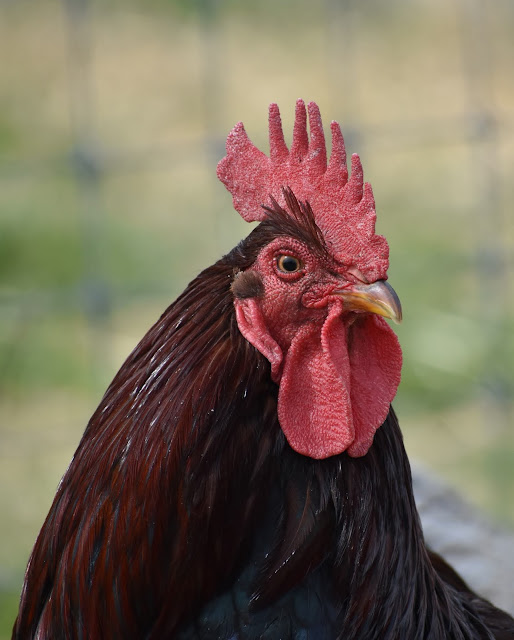 Up until this point, none of our teenagers have crowed.  Fingers crossed that none of them are roosters either, as they will also have to leave the farm.   Sexing chicks is obviously a difficult task.  For the life of me, it seems like a design flaw to have each chicken have a 50/50 chance of being either hen or rooster.  The scales should be heavier in favor of hens.  One rooster can easily take care of a couple dozen hens.  And roosters are notoriously territorial... so you'd thing there would be an evolutionary advantage to having more hens hatch than roosters.  It just doesn't seem to work that way.

Yesterday afternoon, I stopped by to visit with "Pop" and Posie. 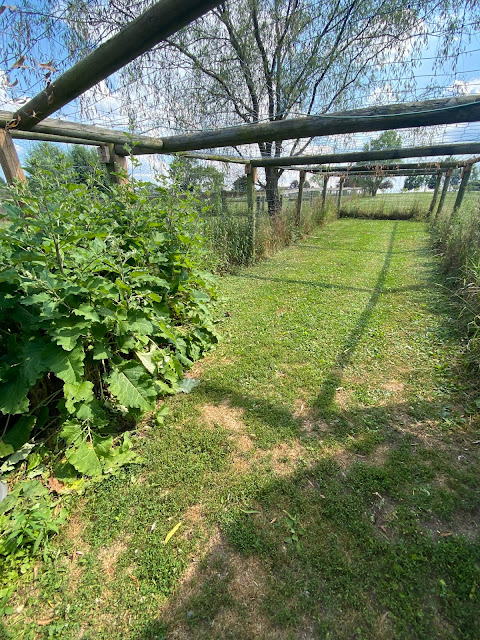 They were escaping the heat in the shade of the burdock leaves. 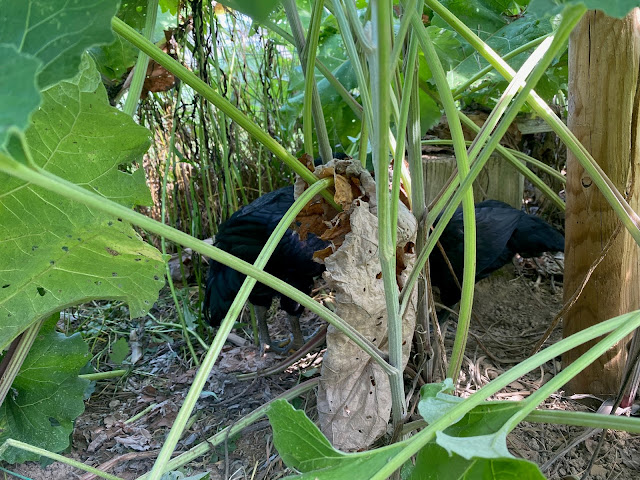 I called to them and they came right out to see me... Posie hopping back onto my shoulder. 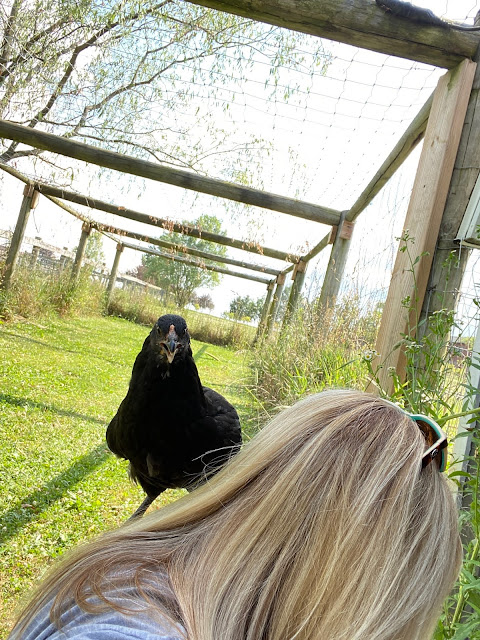 She busied herself talking to the other hen in my sunglasses. 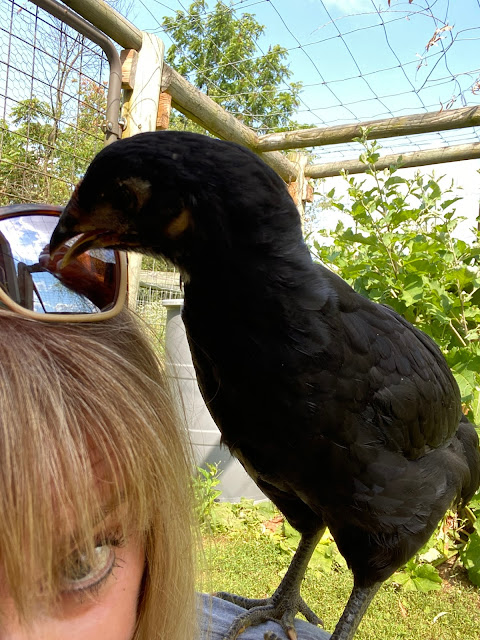 We are in the midst of a heat wave... which is difficult on the animals.  Most just lounge in the shade waiting for cooler hours.  I cannot complain about our 96 degree weather, as there are plenty in other areas of this country who are suffering with even higher temperatures. 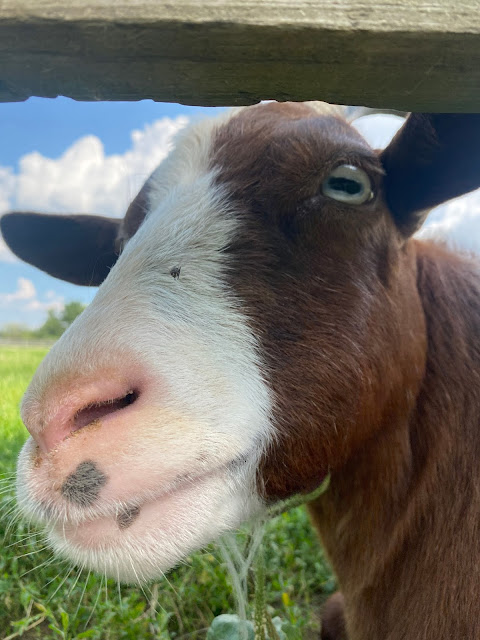 We keep plenty of fresh water out for everyone to cool themselves.  The ducks have no trouble finding water at various places on the farm... 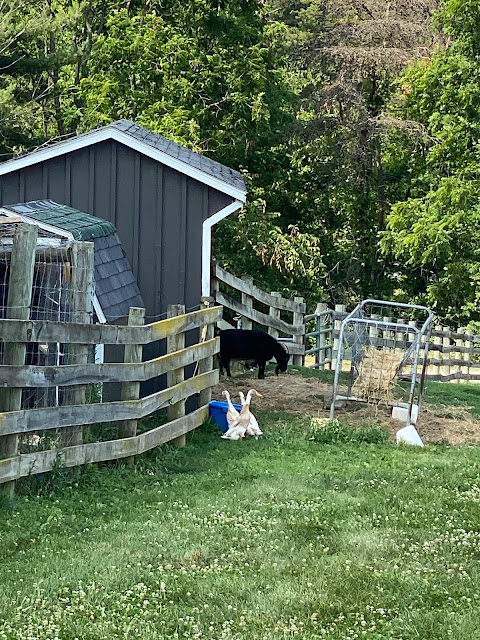 even though there are several buckets and a pool at their yard, 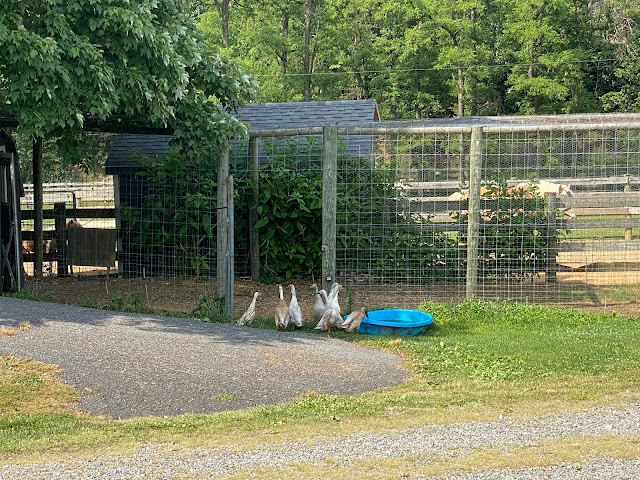 they have a very bad habit of messing around in the goats' water.... which necessitates that I change that water several times a day.  Ducks!!  It's a good thing you're so cute! 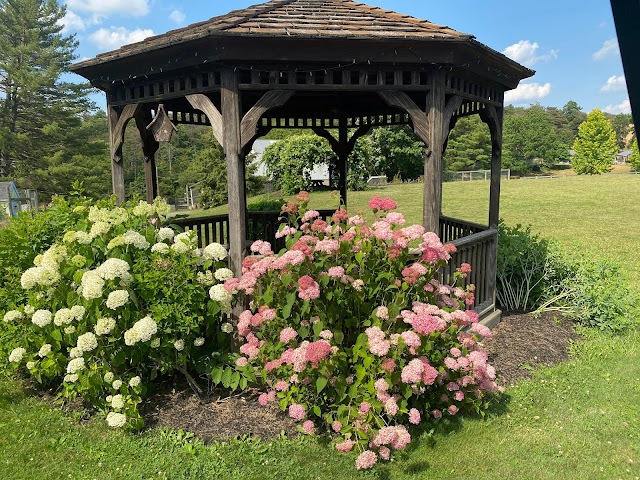 While I was out taking some flower garden photos, I leaned against the rocks that surround these gardens and felt the burn of sun-baked rocks. 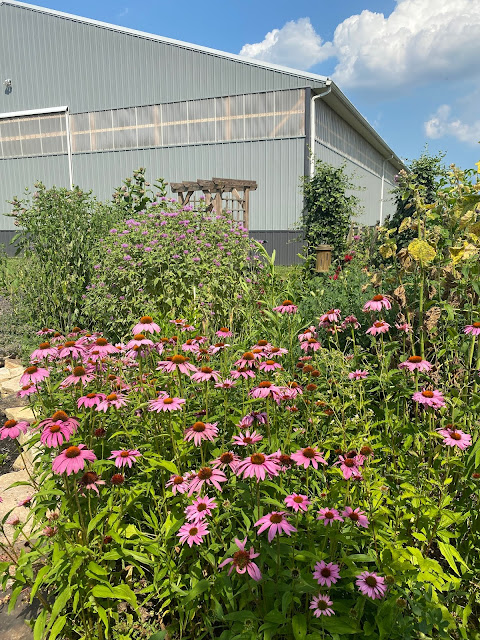 I wondered if, indeed, one can fry an egg on pavement during a heatwave such as this.  Surprisingly, the egg did not fry, but rather just ran off the rock into the soil. 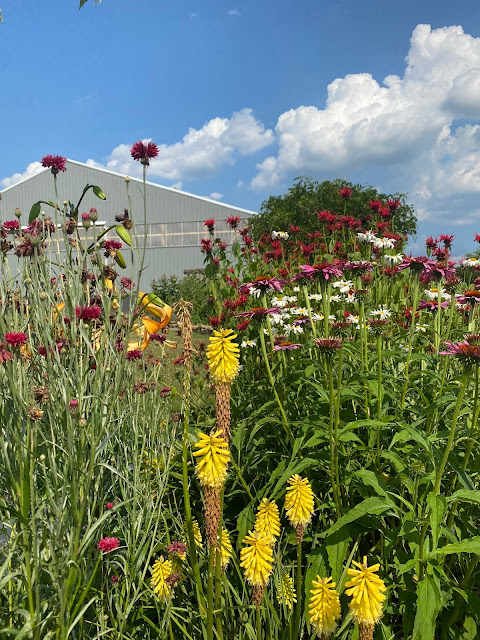 Eggs will fry if the surface reaches 158 degrees F.  I suspect those rocks might have only been 157 degrees! 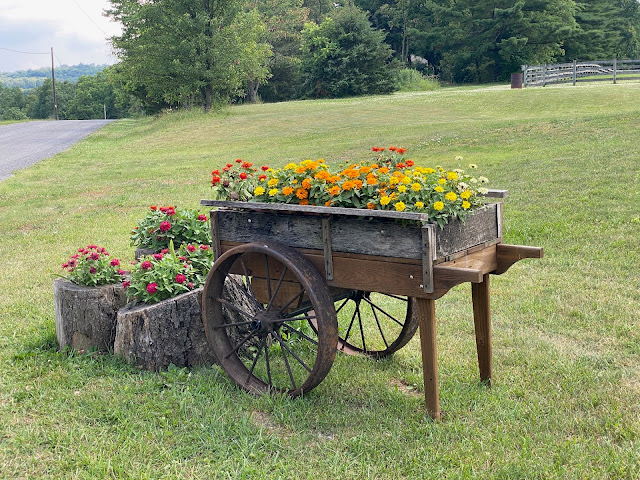 Needless to say, watering has been essential!

daisy g said…
Ah well, one rooster is enough for any flock. We will actually be looking into getting a guard goose after our rooster is gone.

Marcia LaRue said…
Your flower pictures are so pretty! Love the wheelbarrow!
Too bad about Poppy being a Pops and a pooper, too! I hope you have no trouble rehoming him!

Meghan Grace said…
Oh my! My son and I used to volunteer at a wonderful farm sanctuary outside of San Antonio. We loved our time there and the people that run it are dear souls. They had a rooster that my son dubbed "mean rooster." I only tried to go in his large pen once. He'd attack us always with his big spurs. He was the only critter that ever scared me there!
June 30, 2021 at 9:07 AM

This N That said…
Those Roosters seem to sneak in where they are not wanted..Posie gave you a warm "Hello"..lol
Your cone flowers are gorgeous..Mine are just beginning to bloom..They got a rather heavy pruning from a ground hog about a month ago..Maybe a good thing..They will be short and in tight bunches...
Hopefully this is the last day in the nineties til next week..We sure could use some rain!!
Hope your Cicadas are gone now..xxoo
June 30, 2021 at 11:18 AM

ladybug loves lilacs said…
Oh those roosters. My son was spurred by one of ours years ago. We decided since we weren't hatching anymore eggs we didn't need a rooster and so let ours go to a new home.
Your flowers are so pretty!
June 30, 2021 at 4:32 PM

THE BEARDED ONE said…
HOW I LOVE THESE...GOTTA BE CAREFUL W/A CHICKEN ON YUR SHOULDER...SMILING.... YOUR POST AND PICTURES ARE SO VERY ENJOYABLE...WE HAVE NOT HAD INTERNET AND I AM WAY BEHIND ON ALL OF MY MESSAGES...KEEP MILING AND KEEP THE GREAT STORIES AND PICS COMING...THANK YOU SOOOOOOOO VEY MUCH !! 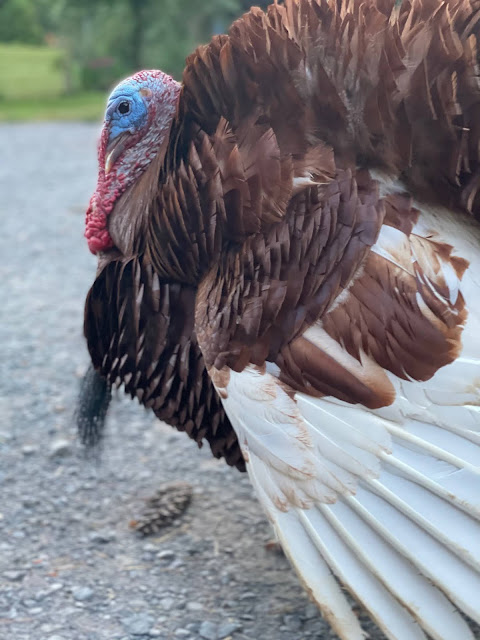