We had a visit from the farrier, yesterday. 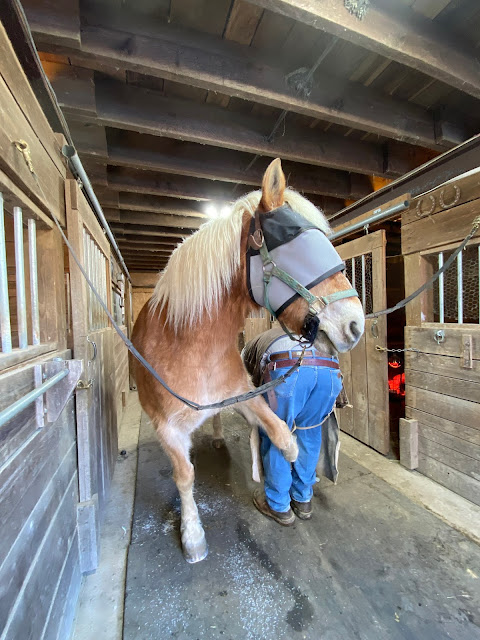 I am always so very proud of my herd when the farrier comes. 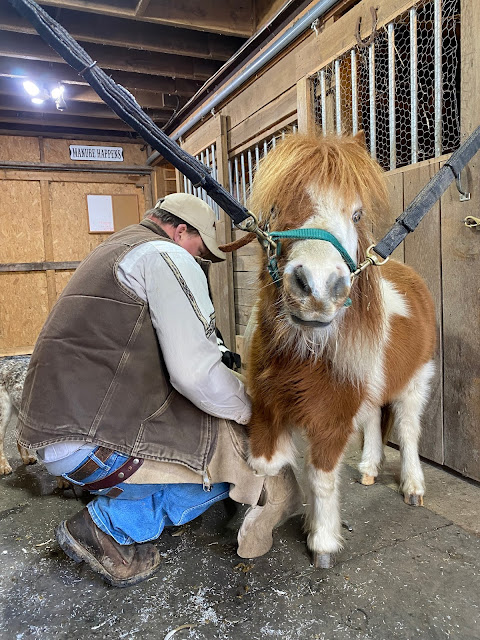 Everyone stands straight and lifts their hooves when asked. 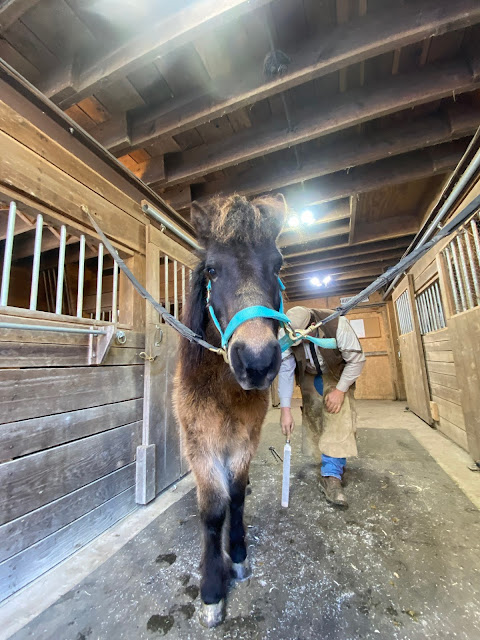 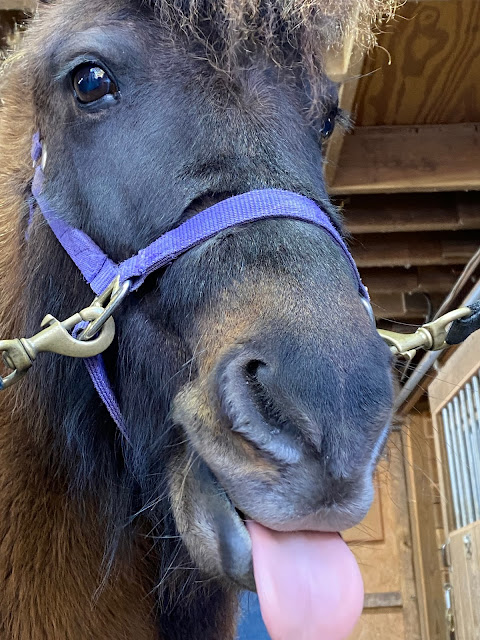 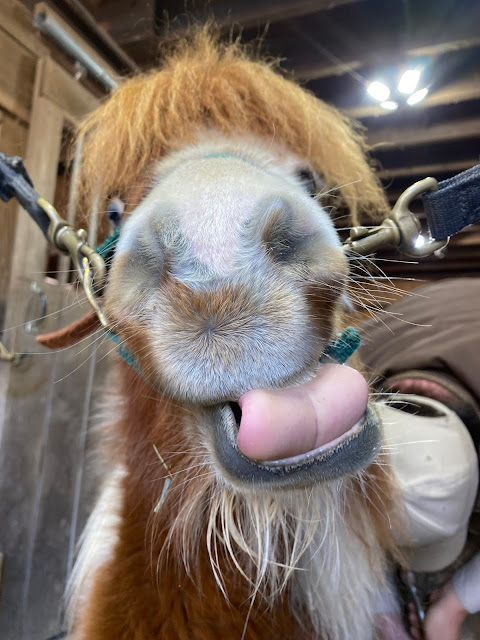 At least the silliness doesn't interfere with the farrier's work!

In case you were wondering... carrot treats elicit these funny little tongue tricks. 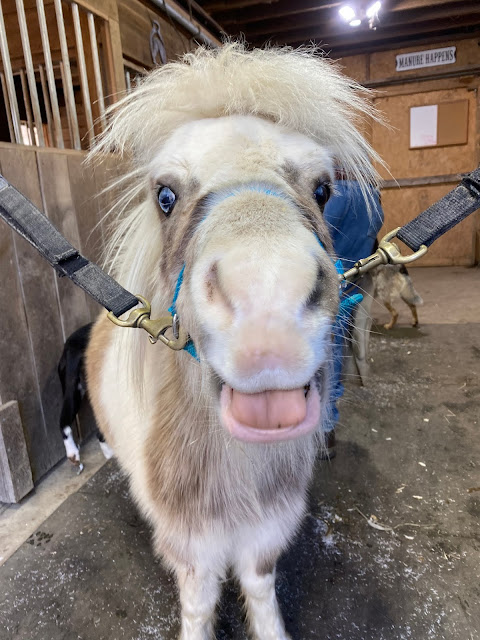 It took about and hour and a half, and all hooves were trimmed up properly for another 8 weeks.

Ollie, feeling a little too "put together", promptly rolled in as much dust and dirt as he could find in the barn. 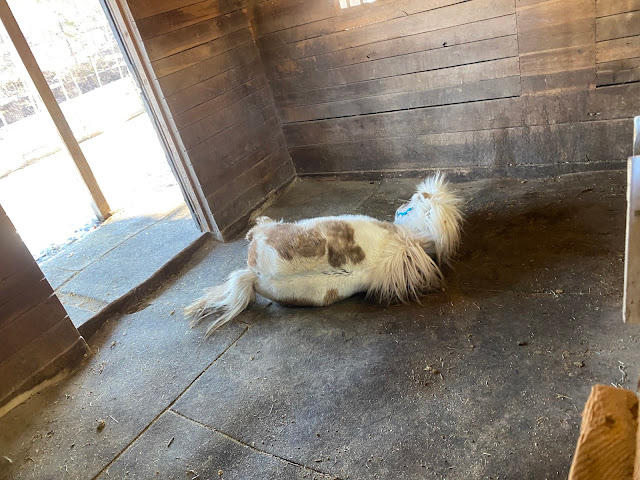 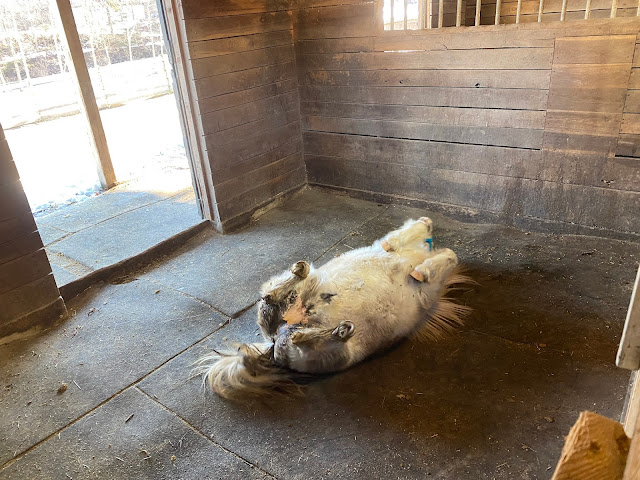 I can hardly wait for summer's arrival so that the entire herd can be bathed.  They will be gorgeous.... for about 3 minutes.   Seriously. 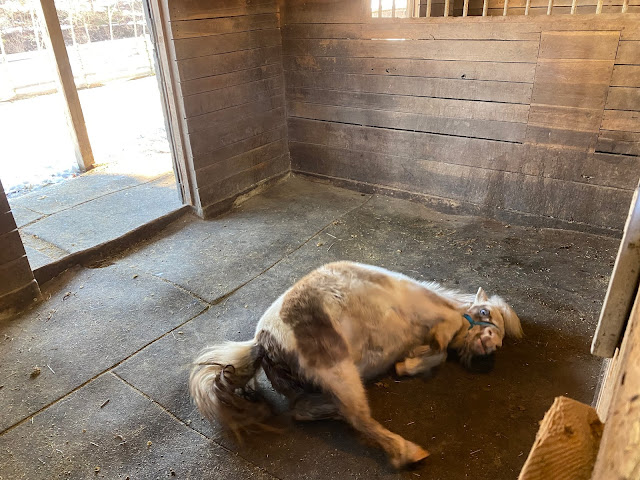 Horses finished, we moved on to the donkeys, who also stood nicely for their pedicures.... although I am sure they would have preferred to have a little pink polish on their hooves in the end- oh, and a facial and massage as well! 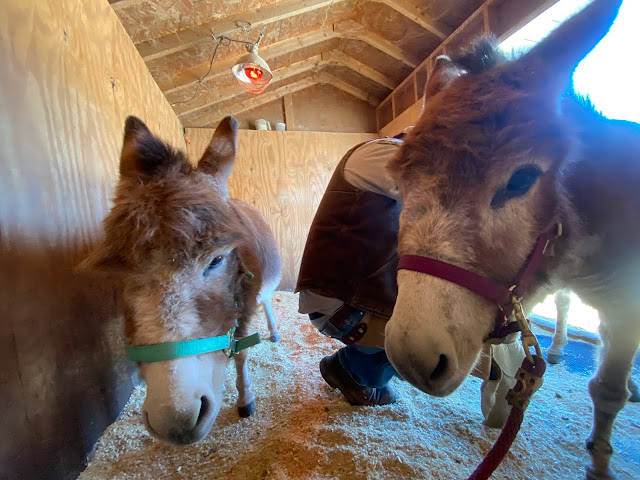 We are in the midst of a thaw, however, the nights have been cold enough that what thaws during the day, freezes again at night.  This has turned the dry lot into a veritable skating rink.  All that ice makes it difficult for the horses to get around.  Difficult, but still easier than it is for us two-legged creatures! 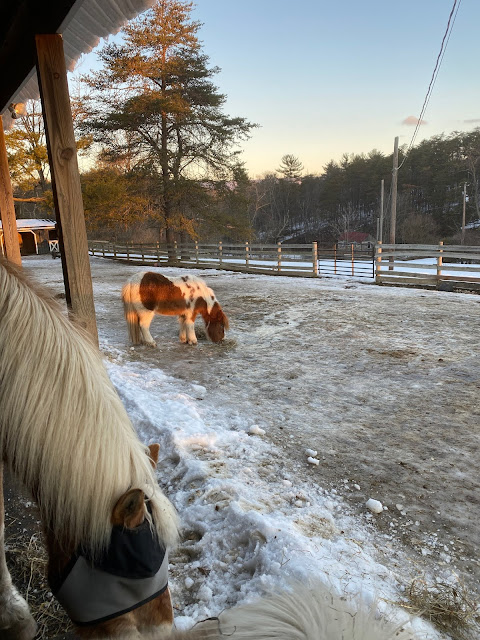 To make life a bit easier for the equines, I opened the gate to the front pasture and let everyone have the run of the field.  Slushy snow is a much easier footing than ice.  Everyone enjoyed the freedom and ran with wild abandon, kicking up hooves, bucking, and playing tackle.  It was truly a joy to behold. 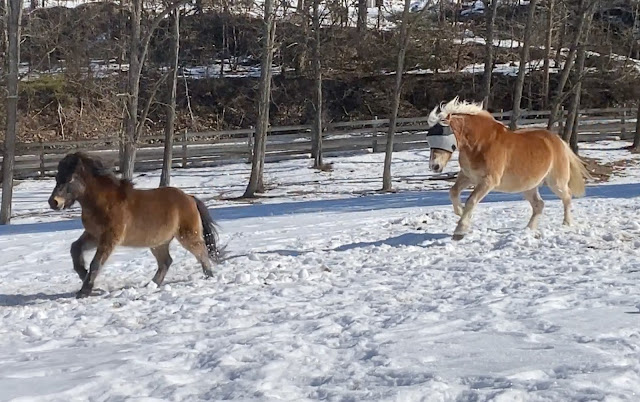 I opened up the donkey's front gate as well, but they stood inside watching the fun and braying at the top of their lungs.  I am sure they were exclaiming how unfair it was that I didn't shovel a path out through the front pasture for them. 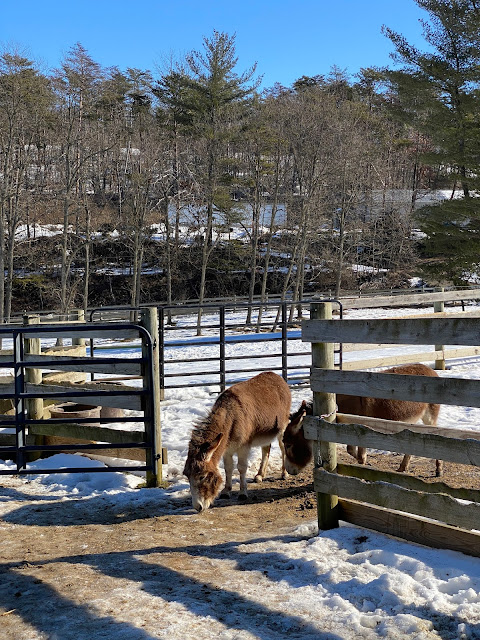 A few minutes passed and finally the allure of the front pasture was more than they could stand.  Gingerly, they tiptoed out into the snow and joined the rest of the herd. 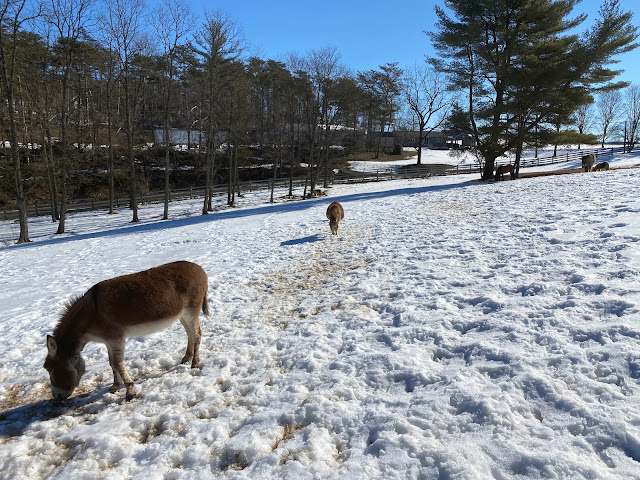 While the farrier was working on the donkeys, I noticed something nasty looking on Chloe's rear right leg.  I was hoping it was just a bit of something "yucky" stuck to her fur. 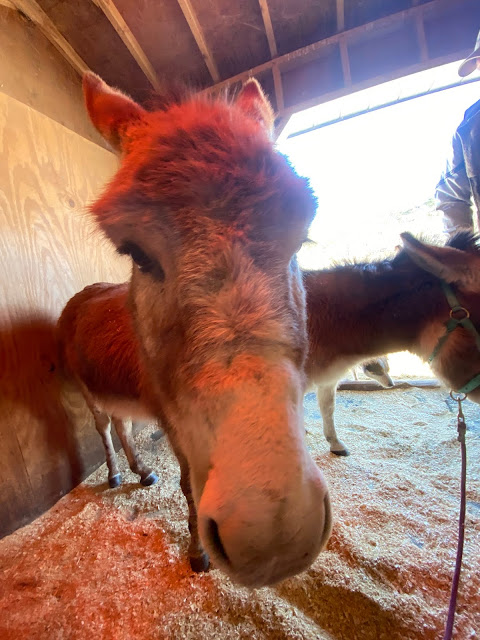 Sadly, upon inspection, I realized it was another sarcoid tumor. 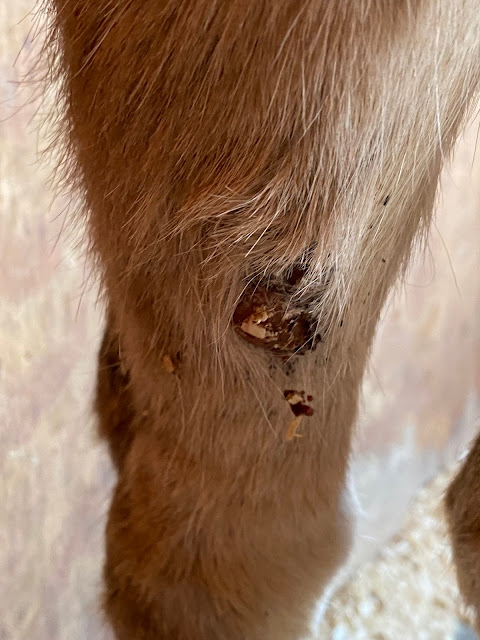 This makes me very unhappy.  I thought I had finally gotten my worry list under control!

I texted Dr. Becky and she stopped by later in the day to look at Chloe's leg.  Unfortunately, more surgery is on the horizon for Chloe.  It seems like sarcoid tumors are going to be a way of life for my sweet donkey girl.

We've reached another week's end.  I am going to try to "tweak" the cinnamon roll recipe this weekend and bake some with chocolate filling rather than cinnamon.  I'll let you know how that goes on Monday... but I am quite optimistic!!  I hope my family doesn't ever tire of goodies.

jaz@octoberfarm said…
oh no...poor chloe! is it usual for them to show up on legs? will you have to remove each of these as they appear? does anyone know what causes them? you sure have had a run of worries.
February 26, 2021 at 7:31 AM

colleen said…
I would love to see another video of the Equines being let out and their shenanigans.
So sorry to hear about Chloe. I'm also wondering about the questions that jaz asked.
Could you ship one of those cinnamon rolls to Maine? :) Have a great weekend. xoxoxo

Unknown said…
Love seeing happy horses! So pretty in all that snow. Poor Chloe, hope they aren't painful, they look painful. We all know she will get the best care. Have a wonderful weekend! Lisa G in TN
February 26, 2021 at 8:32 AM

Patsy from Illinois said…
Hate to hear it about Chloe. St. Patrick's day will be coming up soon and don't they have some special headgear for that day?
February 26, 2021 at 10:33 AM

kay saylor said…
You do know how lucky you are to have a vet not only in the family, but right next door? Of course you do. I am beyond jealous.

I always tell my sister that when I die I want to come back as one of her cats. Ditto for one of your menagerie. Happy animals!
February 26, 2021 at 11:20 AM

This N That said…
Fun post until you got to Chloe..so sad..worrisome but not invasive?? More to come??
I believe sarcoids are related to the human papilloma virus..would the vaccine be of any help??
Fun to watch the romping herd..
Love the expressions..
Have a good weekend..Hugs
February 26, 2021 at 11:25 AM

Karen said…
Chloe the dog sends Chloe the donkey girl her very best:) Nothing is better than when the entire 'flock' are well and happy - hoping for the best outcome.
February 26, 2021 at 3:34 PM 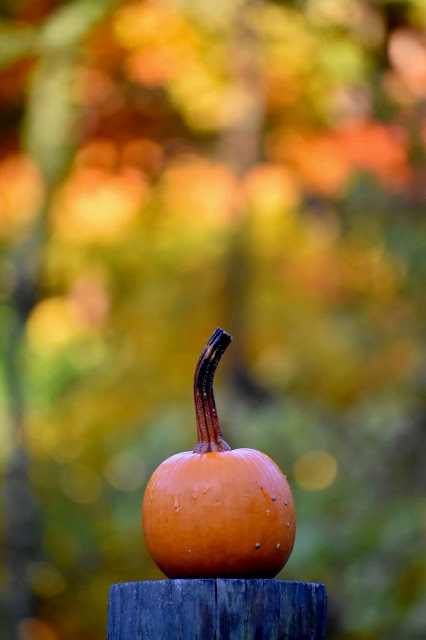