Thanks so much for all of your positive comments on Friday.  I am planning on resuming our Friday Food for Thought covering topics such as sustainability, recycling, cooking, saving money and other topics that are of interest to everyone. 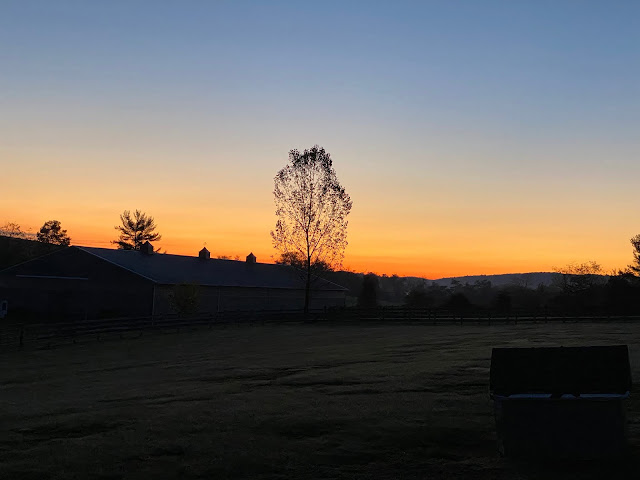 If there are any subjects... or specifics that you would like me to delve into, please leave me a comment or shoot me an email. 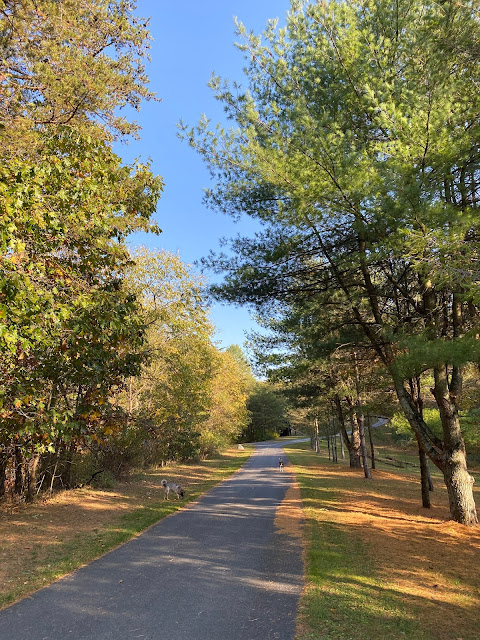 In case you need it, my email address is beehavenmaven (at) gmail.com.  (I wrote it this way so that internet bots cannot use it.) 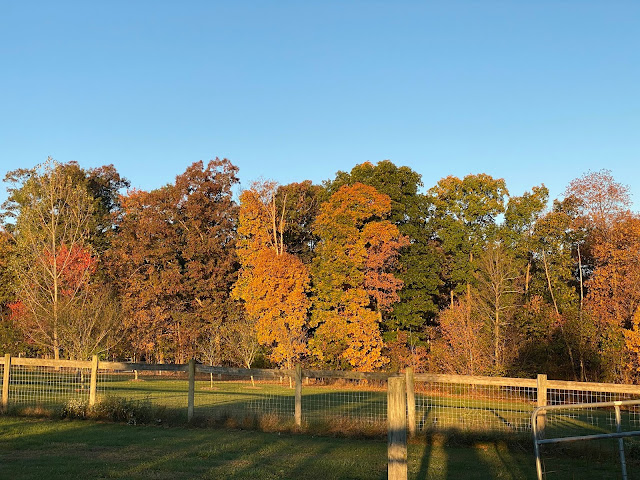 With the exception of one quick trip to see Tyler play rec. soccer on Saturday morning, we spent a quiet weekend here on the farm.  A quiet weekend is never boring, however.  And actually, "boredom" is a forbidden idea here in our house, where there is always plenty to keep one busy!

We started our weekend (almost) gaining another barn kitty, when this tiny cutie showed up at our neighbors' house. 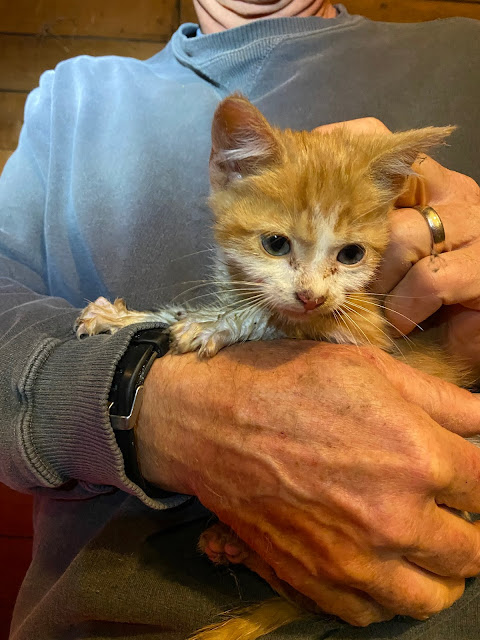 We quickly made him a space in our extra stall (just like we did when we rescued the black kittens), but he was having no part of being contained in one area.  Boy, can this tiny kitten let out a loud protest meow!  He kept yelling and climbing the walls of his pen in futile attempts to escape.  Then he'd pace inside the pen, walking through his water bowl and knocking over his food.  It was clear that he was not happy about this arrangement.  Our fear was, however, that if we left him out and about - the older barn cats might not tolerate him.  So, you see, it was for his own good.  He wasn't buying that idea. 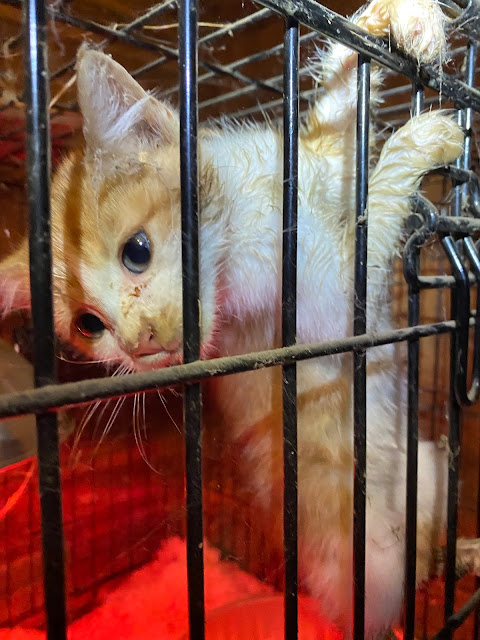 I had texted Dr. Becky to see if she was interested in another barn cat, and she came down to see him... took one look at him... and off they went, together to her barn instead.  She has a secure room in her barn that she could keep him in that night.  By Saturday morning, kitty was following her all around the barn as she did her chores.  It looks as though he found his home.  She did let us know that he was completely flea-infested.  So, he will get all the care needed, be neutered when he's a little older, and lead a pampered life... just as good as if he stayed here with us.

Griz was happy to see him go. 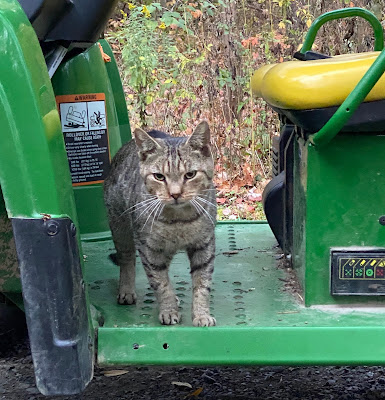 He really didn't want to give up his bed for a flea infested kitty! 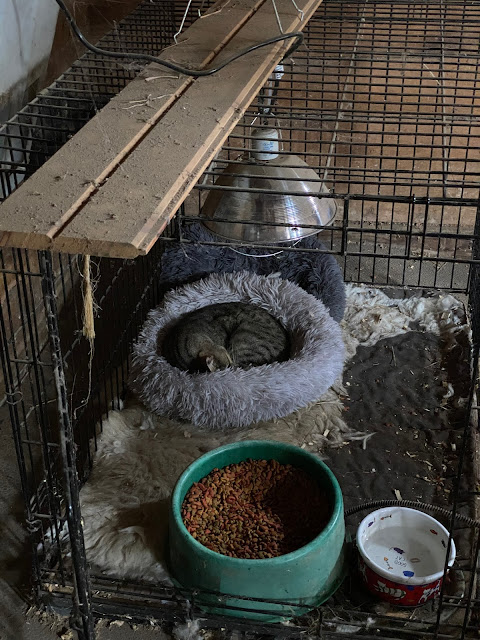 We had lovely, warm, autumnal weather with much-needed rain moving into the area on Sunday.  A good portion of the weekend was spent moving animals around... horses up to the upper pastures, horses back down from the upper pastures.  Donkeys, sheep and pigs out to the front pasture and back in again...and so on and so on.... just normal life with an arc full of animals! 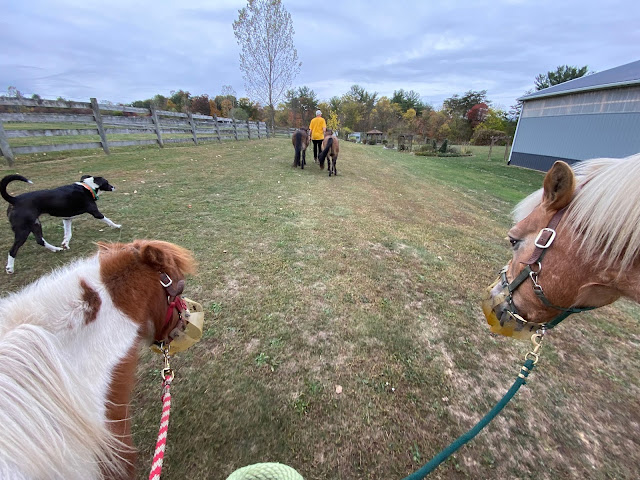 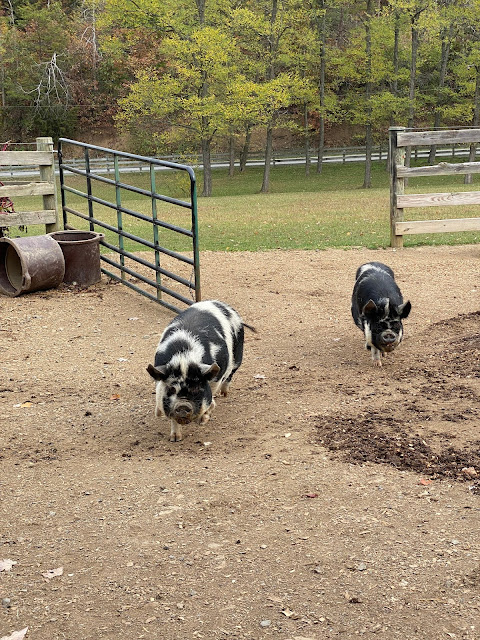 It's easier to shuffle donkeys and pigs around if there are two people.

I called in the donkeys... 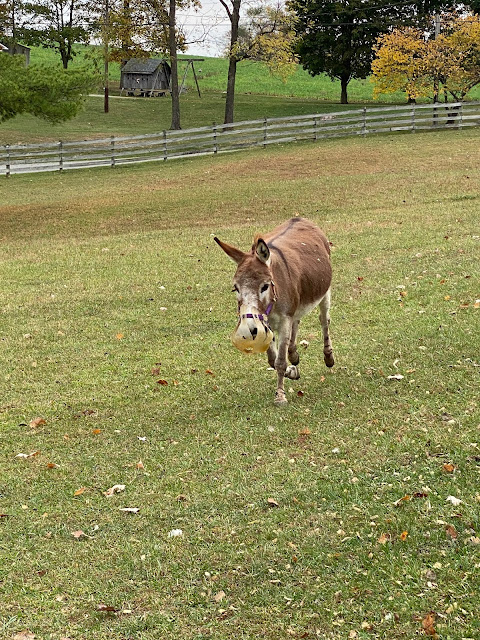 while Hubbs showed the pigs the treats.    And, of course, they followed him willingly. 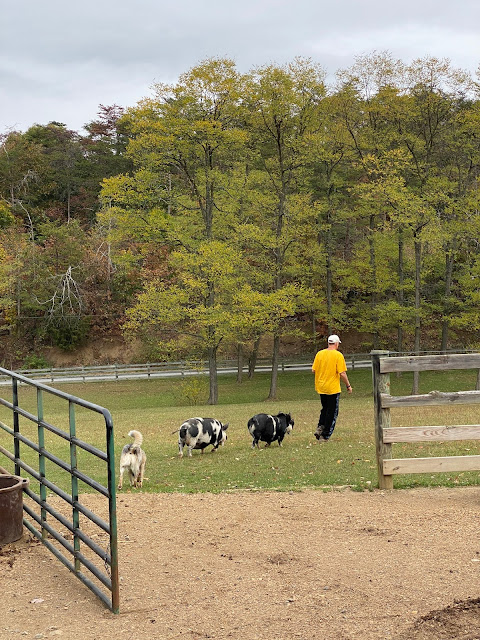 We just may be encouraging this crazy behavior. 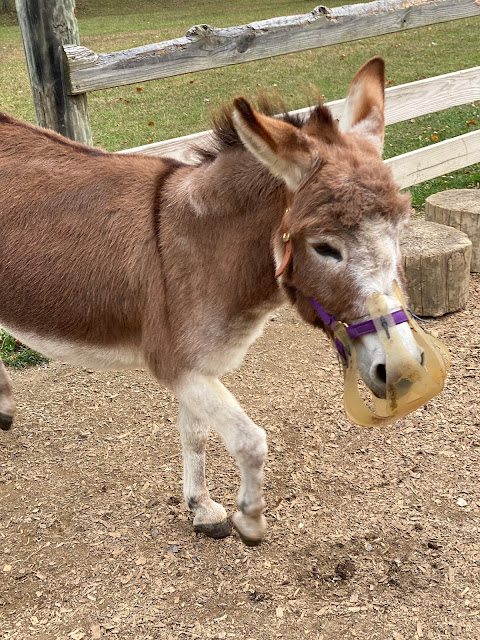 It's obvious, the pigs may be just a tad smarter than the humans, here on the farm! 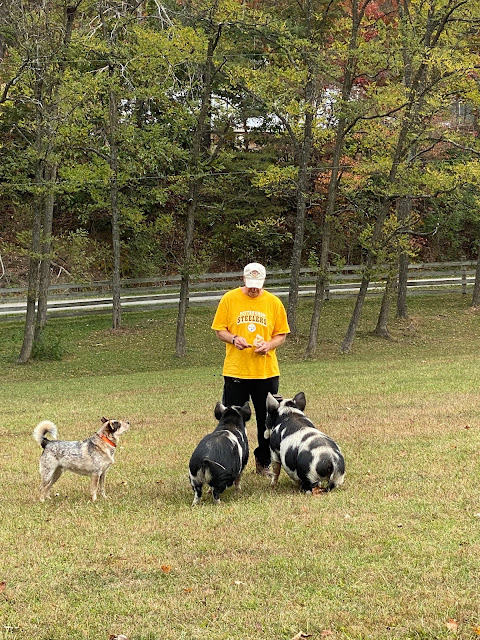 After everyone is where they are supposed to be... 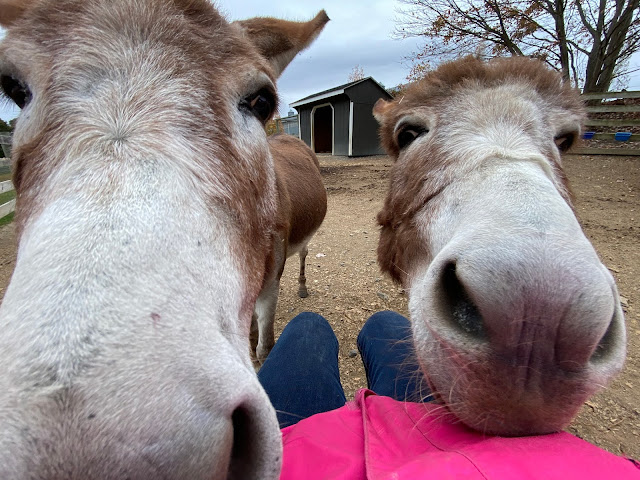 you can see where the pigs set up camp. 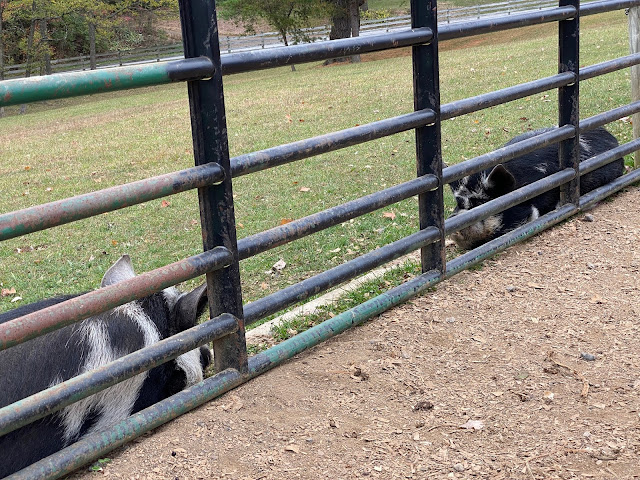 Yup - right outside the gate! 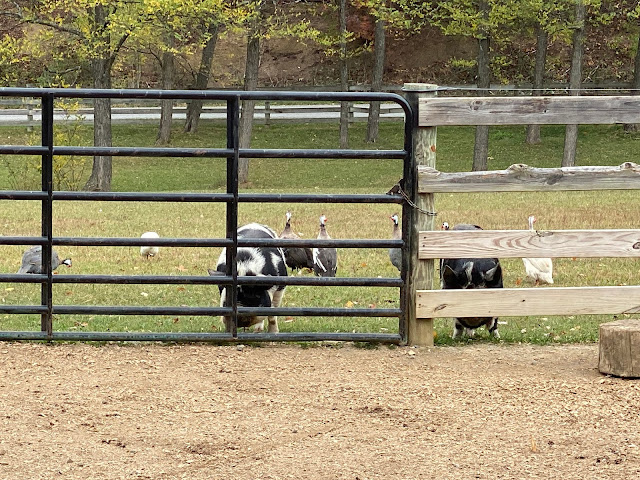 I am sure we could teach the pigs to do just about anything as long as we have a spare box of graham crackers!

I did a little sewing this weekend... still trying to finish up the fabric that I had purchased for apron-making for my Etsy shop.  The trouble is... I keep finding more fabric that I think is just too adorable!  I might need an intervention! 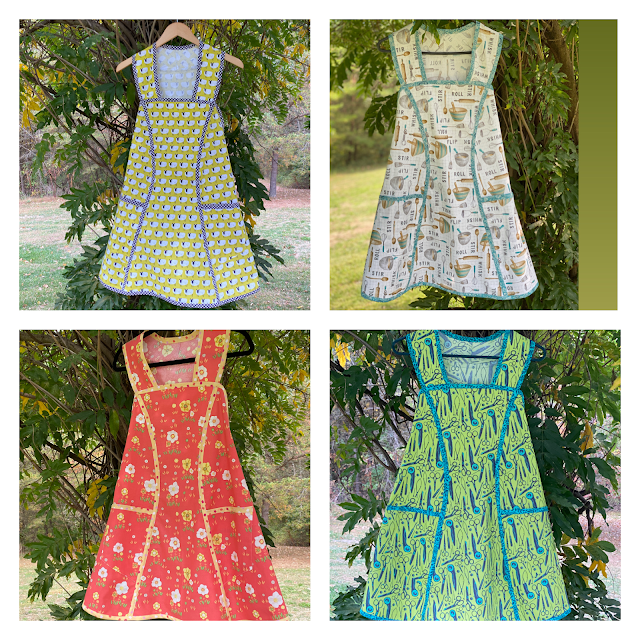 It was time to bake bread again... so I baked two loaves of Rosemary/Sea salt
sourdough bread.  Yummy!!  This is my favorite bread of all time. 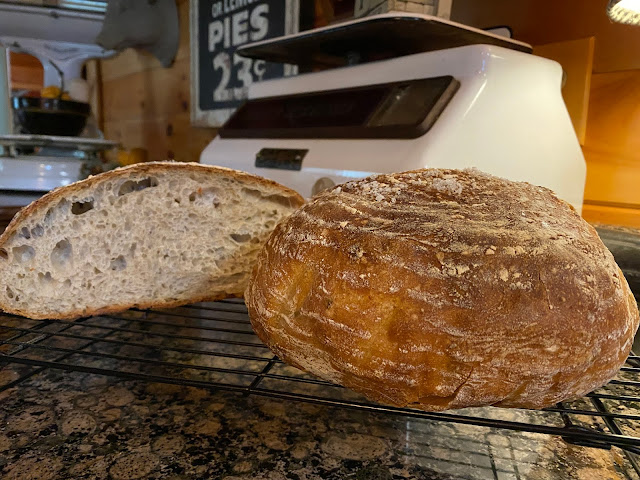 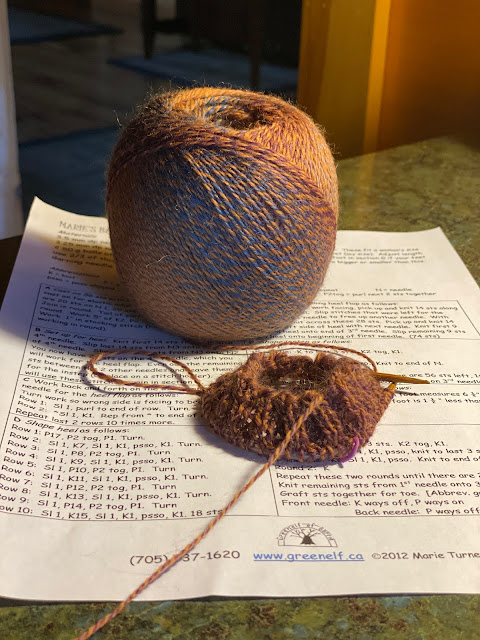 And we took delivery on a load of sheep hay.  Our sheep are very picky and like rich, soft, (and expensive) grass hay.  Luckily our horses are not as picky! 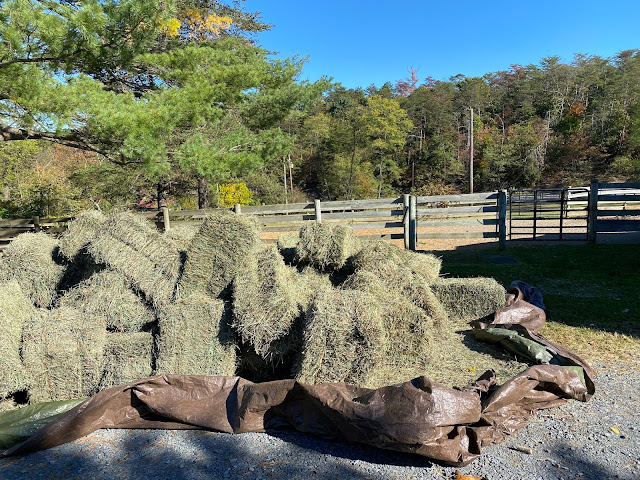 colleen said…
YES, Friday Food for Thought will be returning!!
What a lucky little kitty. What is Dr. Becky going to name him?
Your sock yarn looks so soft.
Griz, you made me chuckle. Curled up in a nice cozy bed with a heat lamp and a food dish as big as your bed.

jaz@octoberfarm said…
i'm glad that kitty found such a wonderful new home. you got my rain again! we just can't get any rain here this year. we are beyond dry.
October 12, 2020 at 7:15 AM

Lynne said…
Good idea with your address ...
I would have never thought of it!
Love all of your “tribe” . . .
The graham cracker followers are fun!
We enjoyed the best color ever weekend here in western Michigan.
Absolutely Stunning . . .
October 12, 2020 at 9:49 AM

Patsy from Illinois said…
I like the Food For Thought posts also. Do the dogs get graham crackers also? Can't forget those loyal babies!
October 12, 2020 at 10:31 AM

This N That said…
SO glad that the kitty has a happy home and we know he will be spoiled..All's well that ends well..
Griz needs to learn how to share..I guess he doesn't remember when he was lonely and unloved..I have heard that pigs are super smart!! I think most animals learn how to get what they want from us..ROsemary and Sea salt..Perfect !! Hugs
October 12, 2020 at 1:25 PM

littlemancat said…
The baby kitty is cute and sounds as if he'll be happy in his new home. Griz does look relieved!
Love the Friday Food for Thought. I did wonder if you decided to stop using the Bites dental products and changed over to toothpaste in metal tubes? I seem to remember you using the Bites (think that's what they were called, chewable tablets in a little glass bottle?)
Mary
October 12, 2020 at 9:23 PM