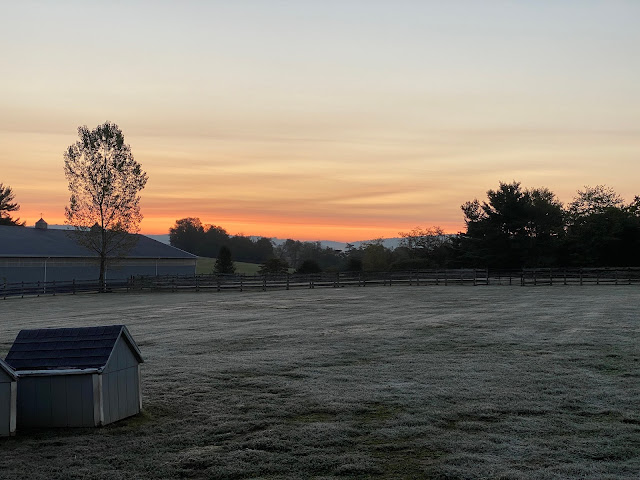 The mornings have been quite frosty this week thus far.
Yesterday began at 25 degrees....brrrrrr.
Luckily, by afternoon it warms up to just a tiny bit cool...
right around 70 degrees....perfect!!

Now that cool weather is here, the horses are no longer going out to
pasture at night.  Instead, they go out in the mornings...
alternating between the upper pasture and the front pasture.
And because they have had access to rich summer grass over the past months,
everyone is just a little too chubby right now.
In order to keep them healthy, I have been putting grazing muzzles on...
even for the few hours that they spend out in the mornings.

They eagerly line up while I am putting muzzles on...
no one seems to mind them at all.

Yesterday, after muzzles were on,
I opened the gate to the front pasture and let everyone out to graze.
And everyone happily went out. 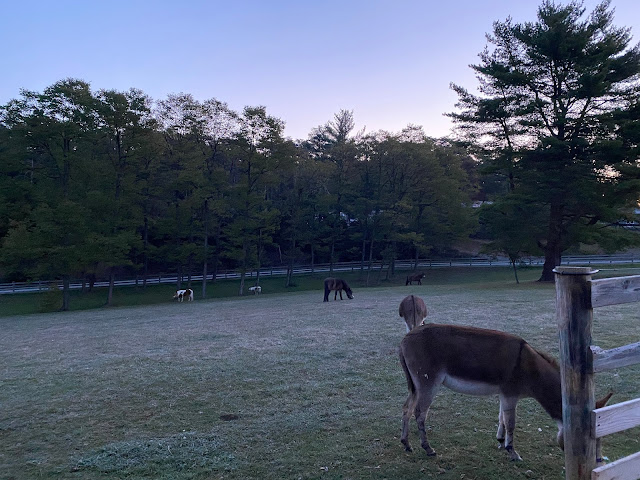 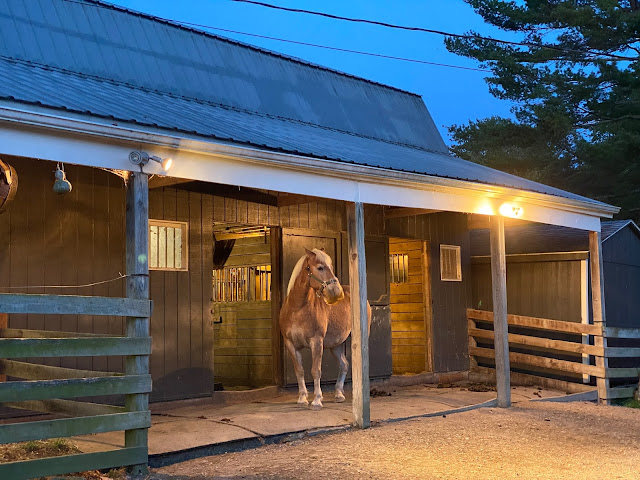 Instead of joining the rest of the herd,
he stayed back at the barn in protest.
To him, the muzzles mean "upper pasture" time,
(his favorite).

He stood at the barn literally voicing his displeasure of the morning's
dining accommodations. 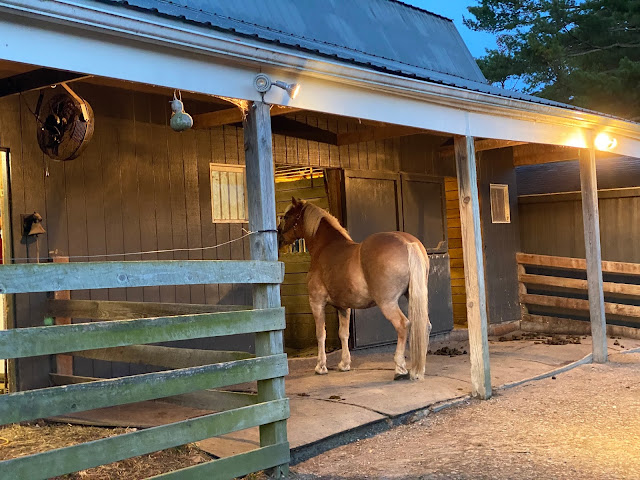 He basically declared a strike, refusing to leave the barn...
lawyering his best argument as to why muzzles in the front pasture
weren't necessary let alone "fair!" 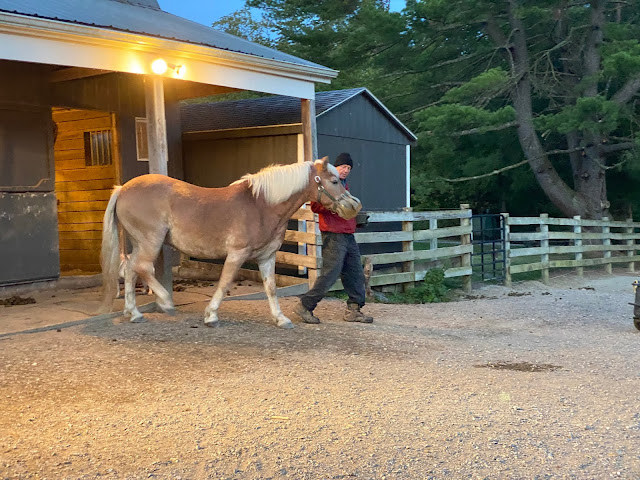 and Moonbeam was shown the door. 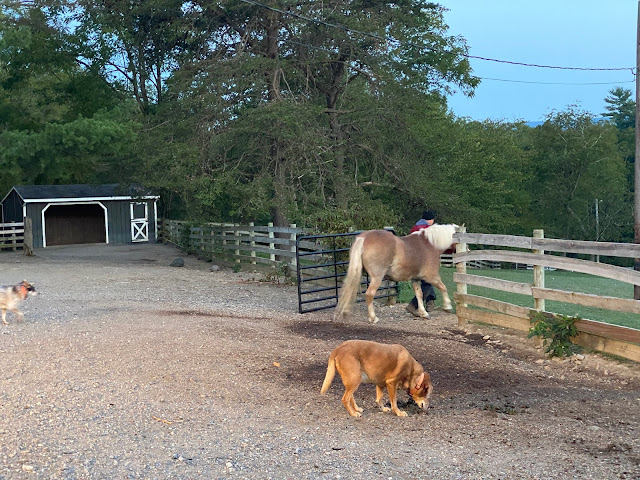 Begrudgingly, he lowered his head to the ground and began his
meager breakfast. 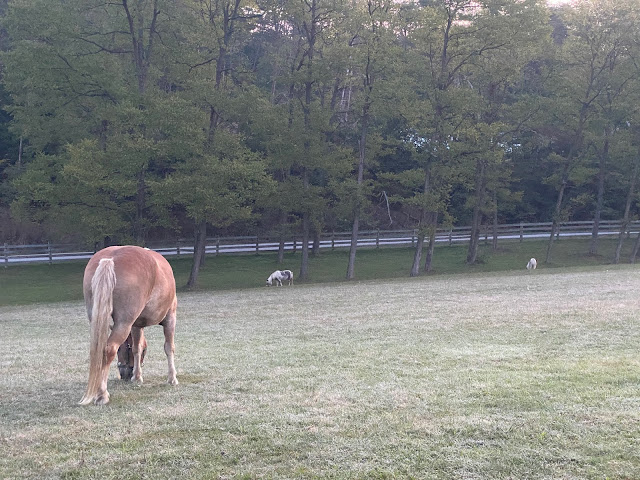 I expect a letter from his attorney to be forthcoming.

Now that Autumn has arrived, 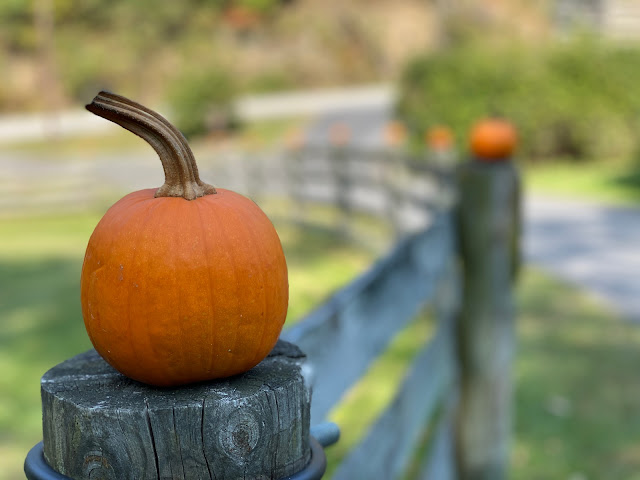 I did a little seasonal decorating, 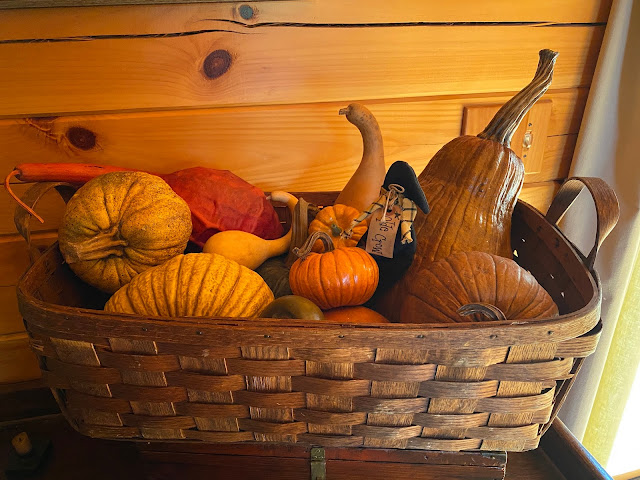 both inside the house, 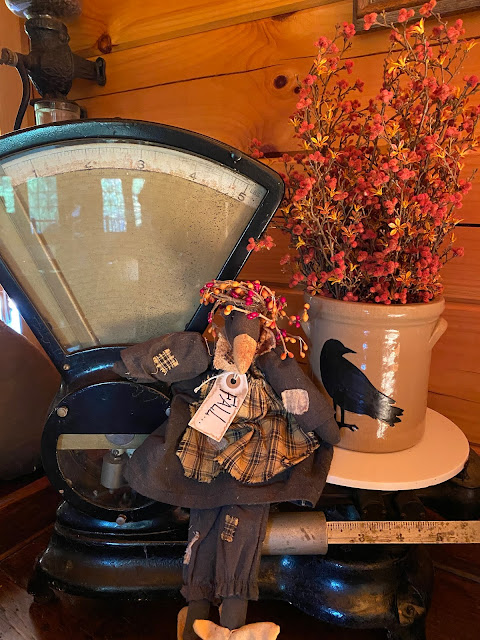 and outside as well... 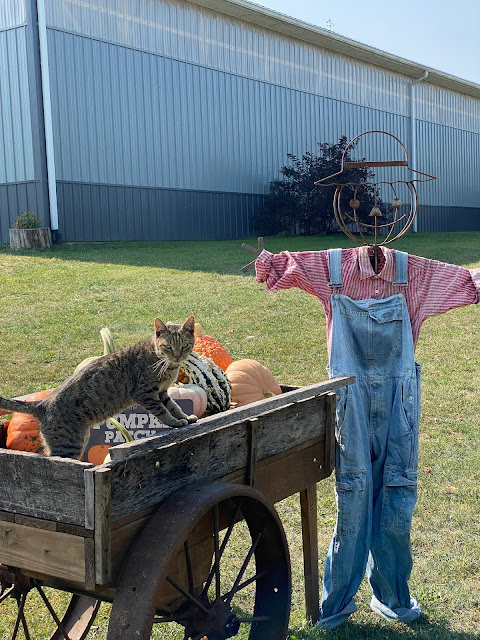 I spent a bit of time in the front pasture yesterday afternoon.
I love sitting there while the pigs and sheep are grazing. 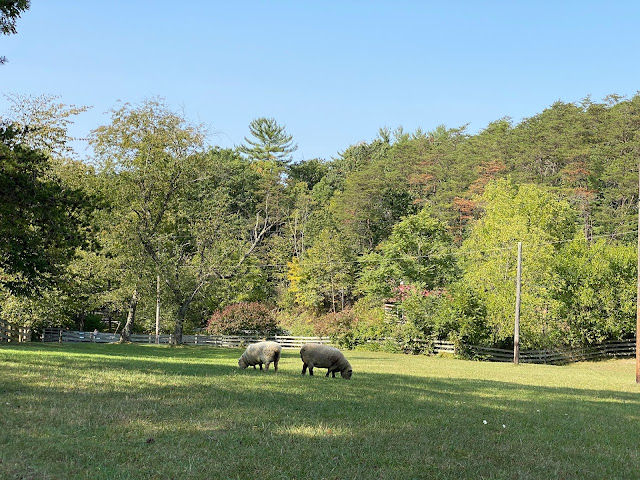 As soon as they see me, the pigs come to say hello. 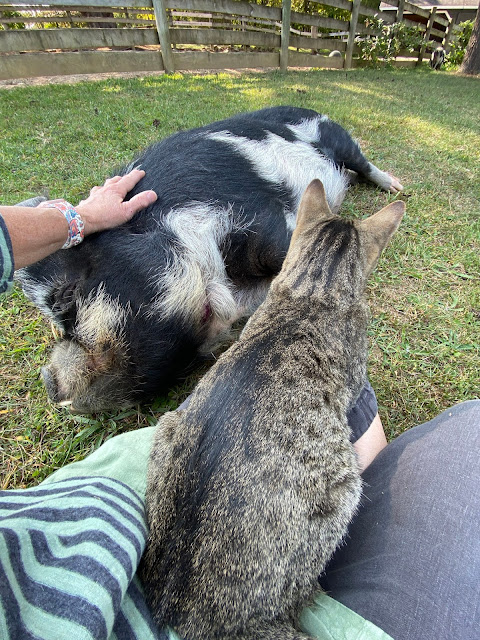 This time, Griz was with me.
He's hesitant to make new animal friends...
preferring human company. 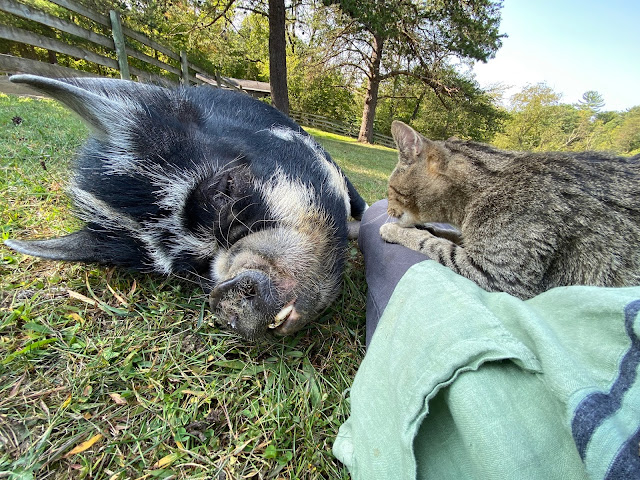 But this time, he agreed to have a sniff.
I think it occurred to him that this funny animal was definitely not a dog. 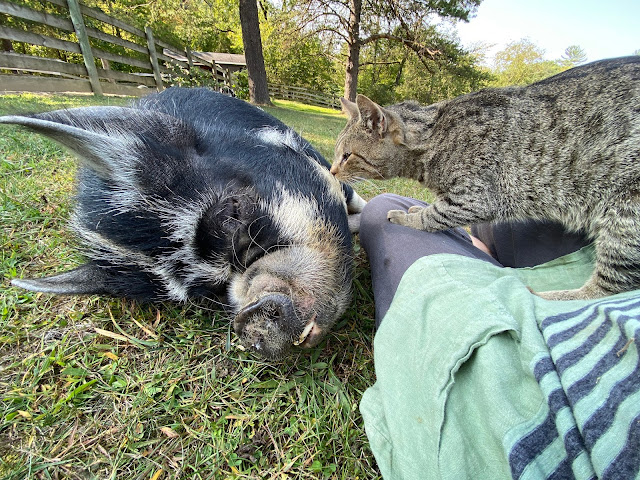 Griz does not love dogs... and takes every available opportunity
to give any dog that invades his space a good slap.


No, this strange animal did not pose any threat to him...
and he even allowed me to put him on top of a sleeping MaryAnn. 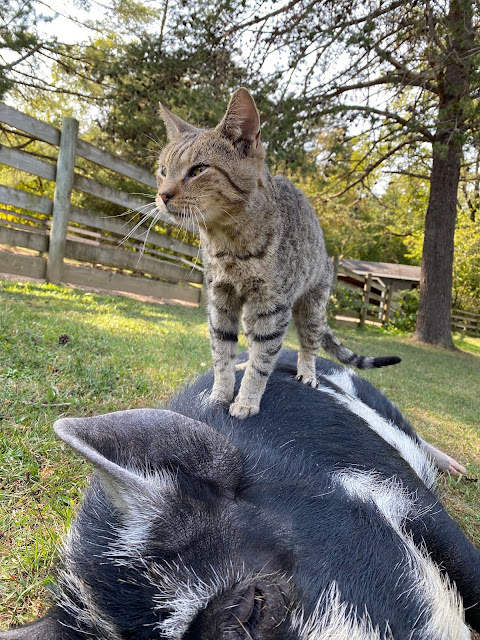 (There's nothing better than a kitty massage... ask any pig!)

We are right in the midst of a sweet spot...
perfect weather... blue sky days... happy animals.
It just doesn't get any better than this!

colleen said…
The picture of Moonbeam in front of the barn is postcard worthy.
I love your seasonal decorations... you never disappoint. xoxoxo
September 23, 2020 at 5:51 AM

Patsy from Illinois said…
Moonbeam is such a handsome guy and he takes advantage of that I think. Has Minerva left yet for her winter lodgings?
September 23, 2020 at 11:19 AM

This N That said…
I think the reason they are so eager to don their grazing masks is because they know that they will be allowed out to graze once they are on..Moonbeam LOL..They do have their desires and are not afraid to let you know it. Any time I try to take a short cut home Mollie digs her heels in.."you are not going to cut my walk short."If only we could know what they are thinking...I guess they let us know!!! Griz definitely had some pig curiosity. Love your Decore...Looks great.. Enjoy the rest of your week. Hugs
September 23, 2020 at 11:51 AM

Sue said…
Oh Moonbeam...you are funny one.
As always, thank you Bev. :) Hope today is everything you, Hubbs and the crew need it to be.
PS. Prayers for the soon to be momma, hope things are progressing there!
September 24, 2020 at 12:31 PM