September 08, 2020
Some days are like surprise journeys.
You start out in one direction not knowing where you will end up.
Yesterday was one such day. 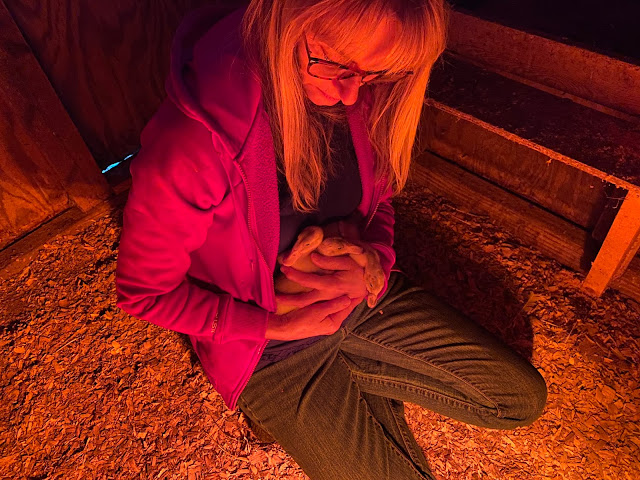 We assumed, though it was Labor Day, that it would be a typical Monday for us.
We arose at sun-up and gathered the laundry.
Monday's are always laundry day.
Before leaving for the barn, we threw the white wash (sheets)
in so that they could be hung on the line after chores. 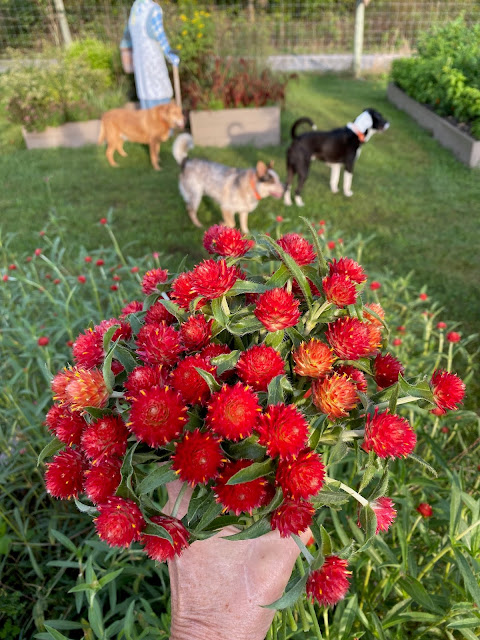 We headed to the barn and the day began as always. 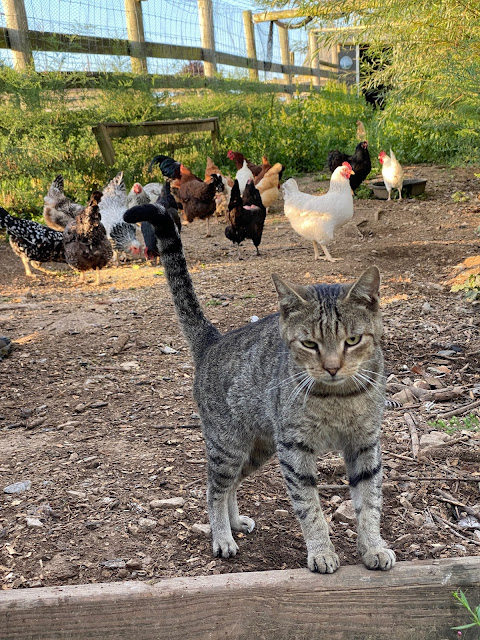 Griz has been joining us for chores lately...
hopping in the gator and heading off to all areas of the farm with us. 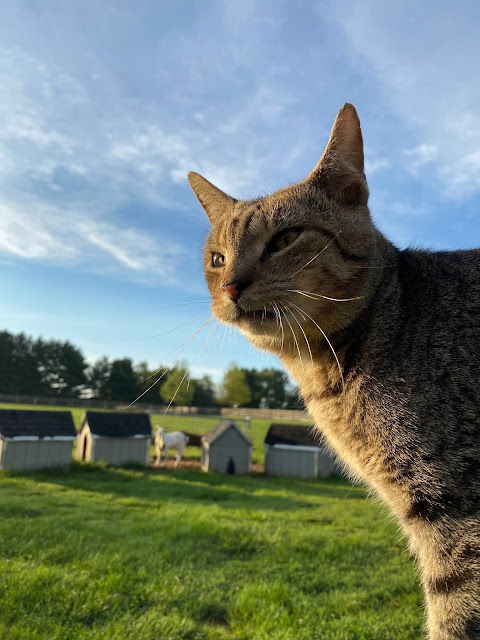 He's taking his job as farm manager quite seriously,
and likes to make sure that all of the work is done to his standards.

He has grown accustomed to all of the animals around the farm;
and with the passing of time has become much less fearful
and much more adventurous. 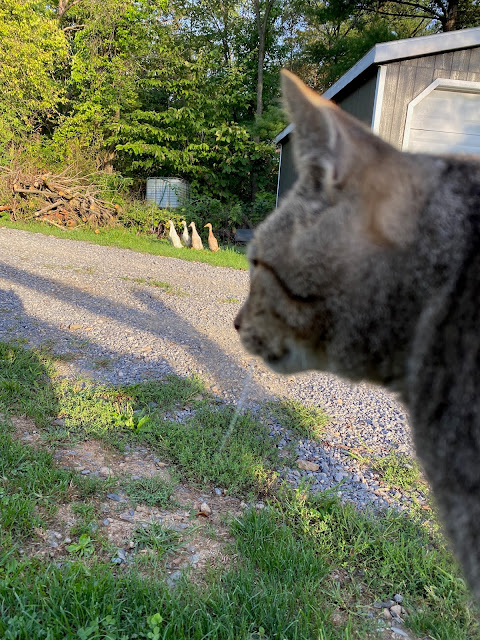 He does give the turkeys wide berth, however.
And to a being as small as him, I believe the turkeys must
be no less than terrifying. 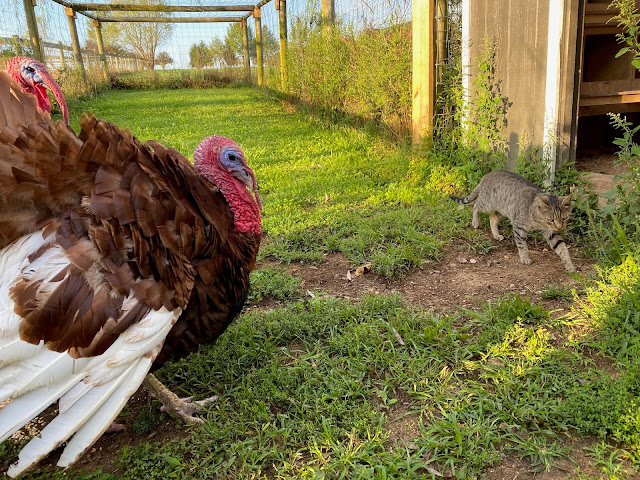 Who could have guessed, last winter when he appeared on the farm,
too scared to approach,
that he would become such an integral part of farm life!

So our day, which started out as any other Monday,
ended up with a surprise visit from our Little Ones...
and they brought dinner!
(Well, dinner was a joint venture... but so very easy with everyone
helping out!)

Our day was filled with duck loving... 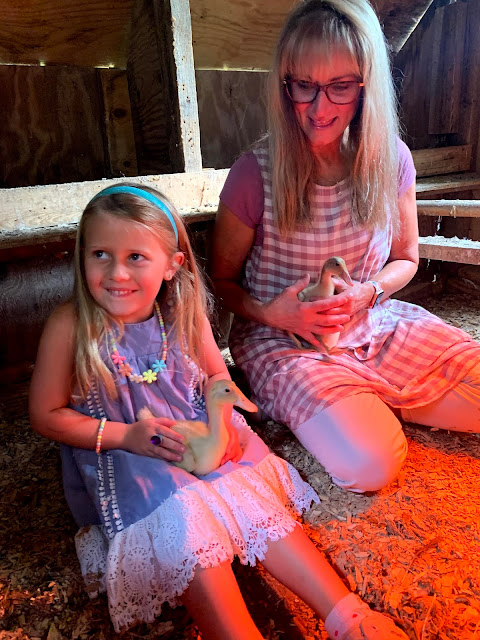 riding Donnie Brasco...
gaining confidence with each and every step... 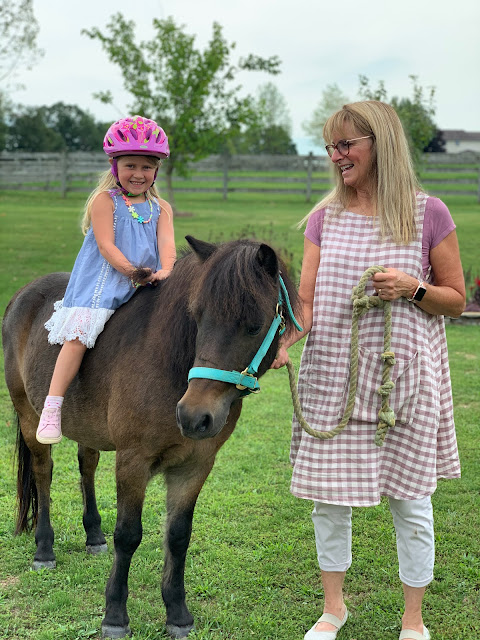 adventures in the woods... 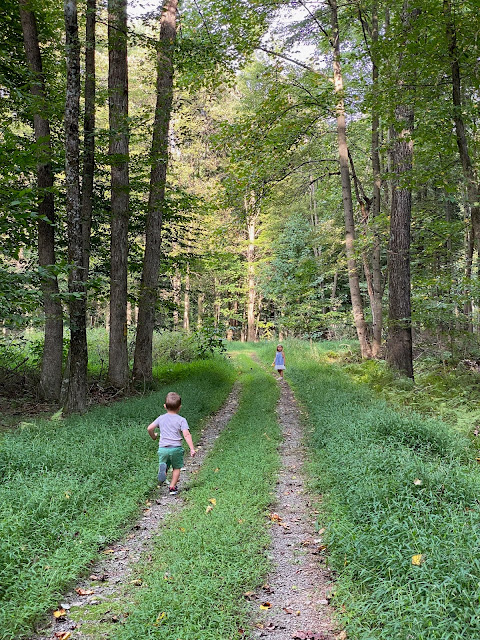 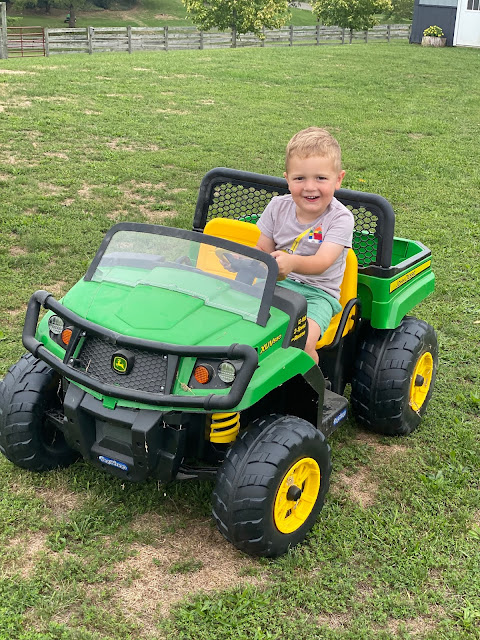 and taking Griz along... 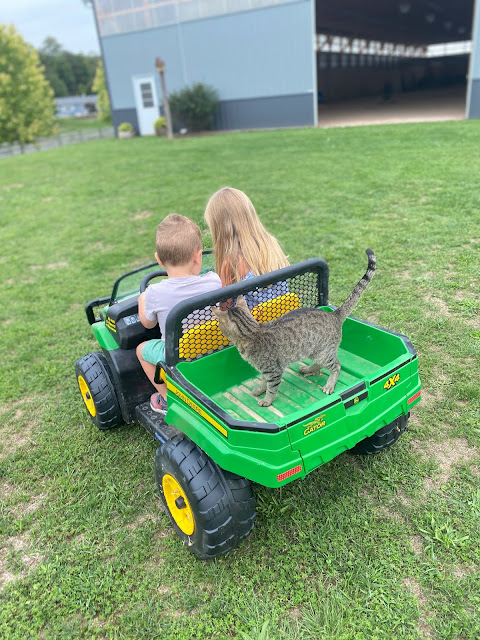 a whole day filled with fun and laughter.
There is nothing like the sound of little ones giggling in delight.
It warms this Grammie's heart!

Some time in the next couple of weeks,
number three is due to be born.
I can hardly wait for another little one to join the family
and grow to love life here on the farm. 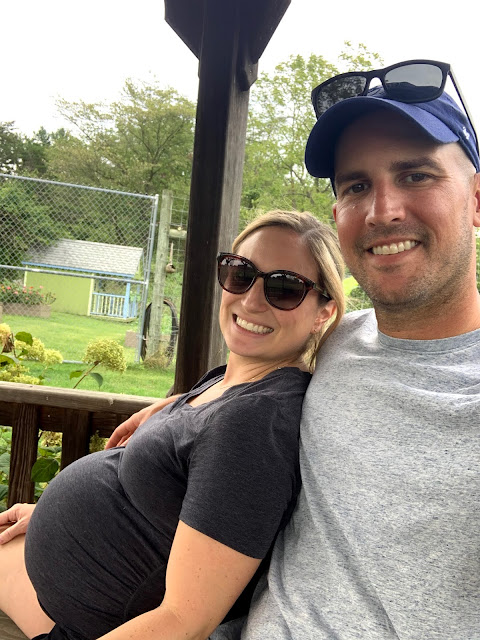 Before collapsing into bed at the end of the day,
I put the finishing touches on two blue toile twin aprons... 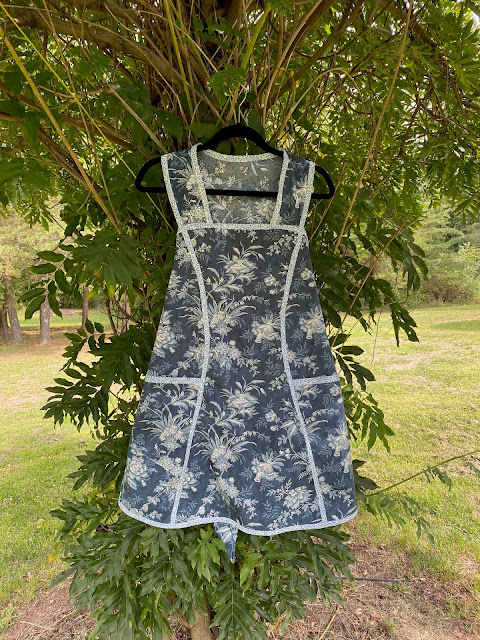 and listed them in my Etsy.
Seven days in September so far... seven aprons finished.

Patsy from Illinois said…
Sounds like a great weekend. Griz is a sweetheart.
September 8, 2020 at 9:51 AM

sbrgirl said…
Thank you for sharing glimpses of your life on the farm!
I rarely comment, but always read.
September 8, 2020 at 11:11 AM

Our little equine family is a tight unit. They've all been together most of their lives, and if I have my way... will live out the rest of their lives in each others' company. It makes my heart happy. We've developed a trust over the years... the equines and I. Whereas the donkeys seek my company and enjoy my attention,  following me around like shadows... the horses take note at my presence and continue their business. I'm sure, most days, they'd rather I didn't fuss with them. But when I ask them to stand still for me, they oblige. I am, after all, the "bringer of food"! Occasionally, curiosity gets the better of them, and they must see what I am doing...  but, most times they could care less. Still, they have a gentle way around me... and a gentle way around my little people as well. I trust this herd and they trust me. One of my favorite moments here on the f