August 25, 2020
It's been a while since I've updated you about our runner ducks.
You might remember that early in the summer,
one of the older five ducks disappeared. 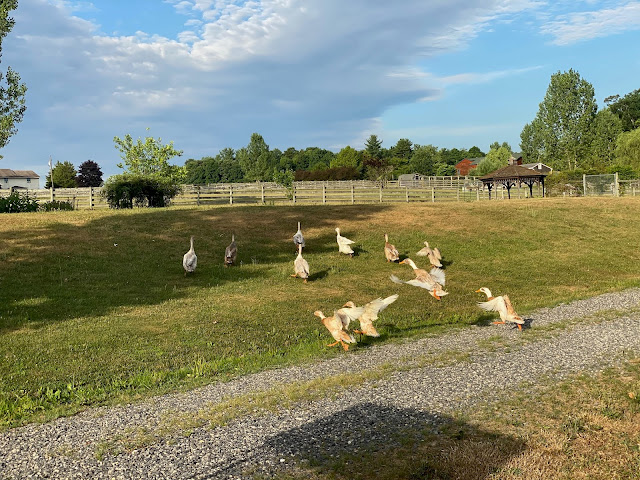 Weeks after that, one of the female youngsters disappeared
as well... only to return to the flock the following morning.
She repeated that behavior again later in the week. 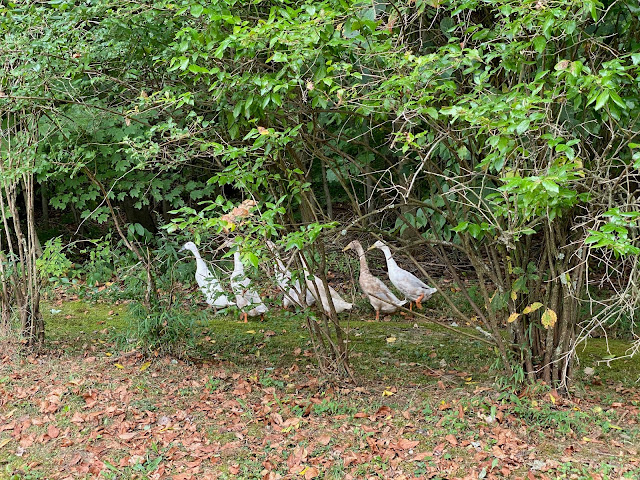 So, we decided to keep the ducks in for a while
to break the habit and prevent a predator from
taking Mrs. Duck. 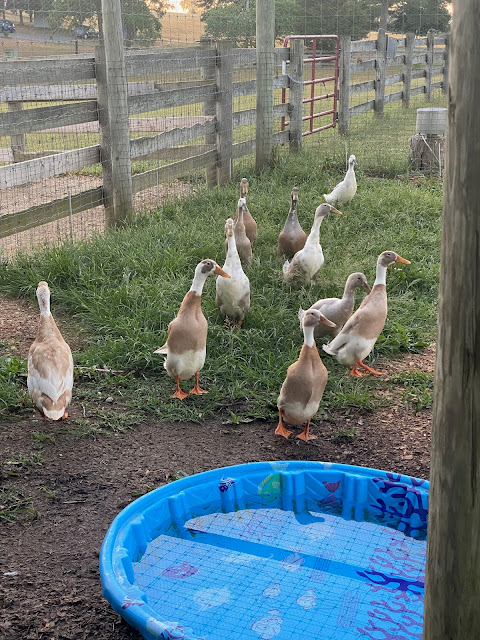 Well, sadly, one day, she disappeared again...
this time not returning to the flock.
We searched and searched and could find no trace of her. 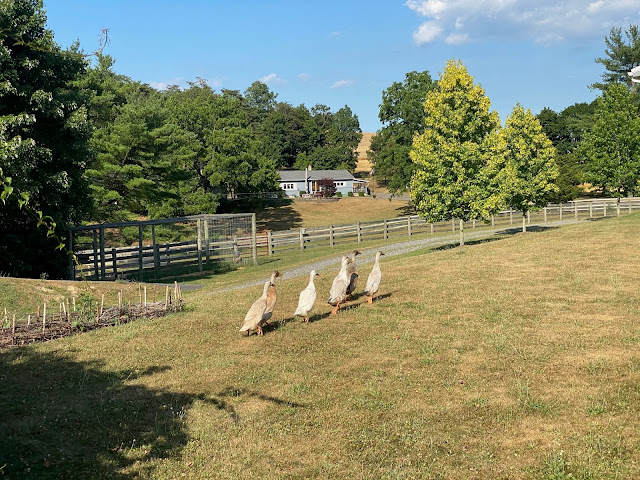 Then, one Saturday morning, our neighbors informed us
that there was a nest of duck eggs way down in their front yard...
quite a distance away from our property.
I walked down to take a look and found this nest: 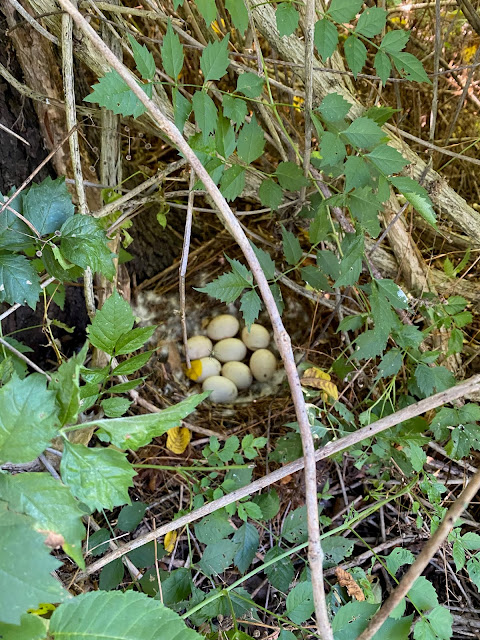 I gathered up the eggs and took them across the pasture to Anna,
our part-time farm helper, neighbor, and friend who was out
mowing the upper pastures.
Earlier in the summer, we had given her our incubator so that she
could hatch out some chicken eggs...
and I wondered if she and her girls would like to try hatching
out these duck eggs.
There is nothing more wondrous to children than watching chicks and ducks
hatching.
She, of course, said yes... but that she did not want to keep the ducks.
No problem, said I... we would grow them and eventually add them to our flock.

Yesterday morning she texted me this photo. 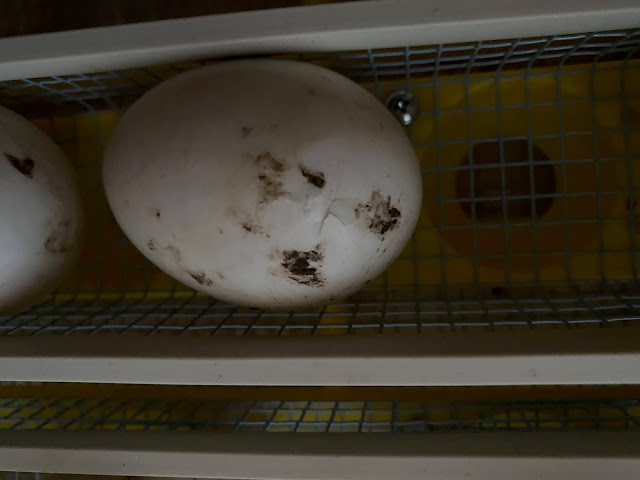 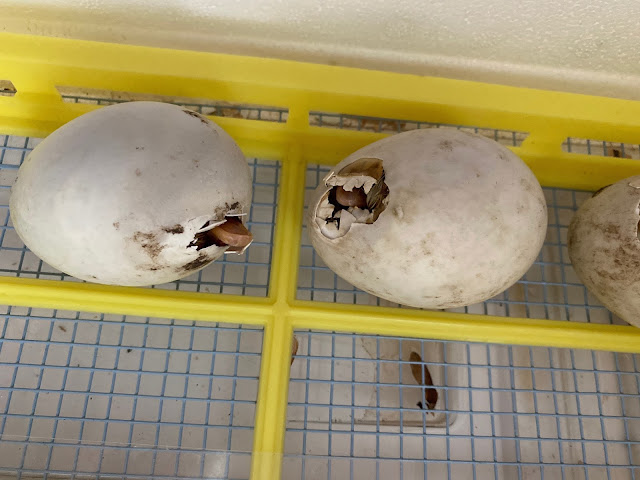 Most likely, some time today we will have a few baby ducklings
finding their way into the world.
And in the next several days, they will come to live at their forever home,
here on the farm.
Until they are full grown, we will raise them in our brooder house...
keeping them safely inside until they are big enough to venture
out into the safe, enclosed yard.

Because we were gone over the weekend, I needed to get out
and harvest vegetables yesterday. 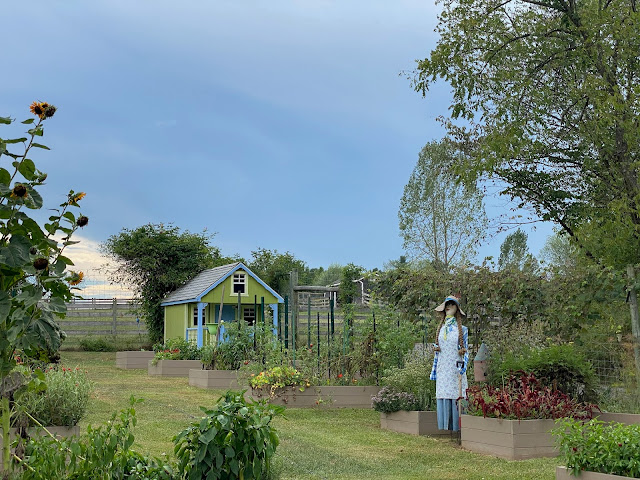 As Hubbs and I worked, picking all of the produce, thunder
rumbled around us in every direction and skies were dark. 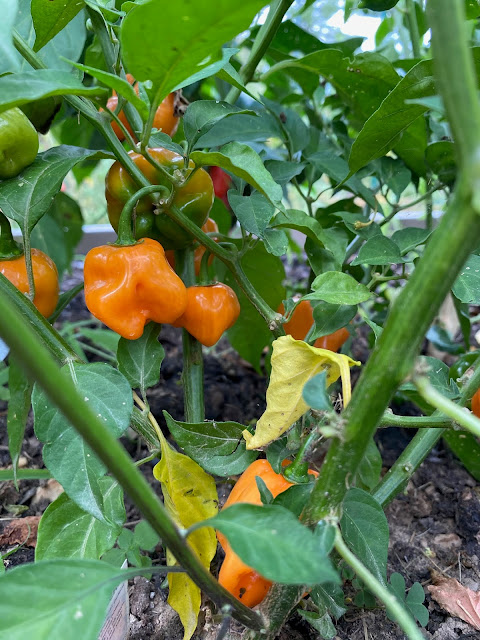 We worked quickly, hoping that a cloudburst would serve
to water our dry garden and our dry earth.
The thunder rumbled, but no rain fell. 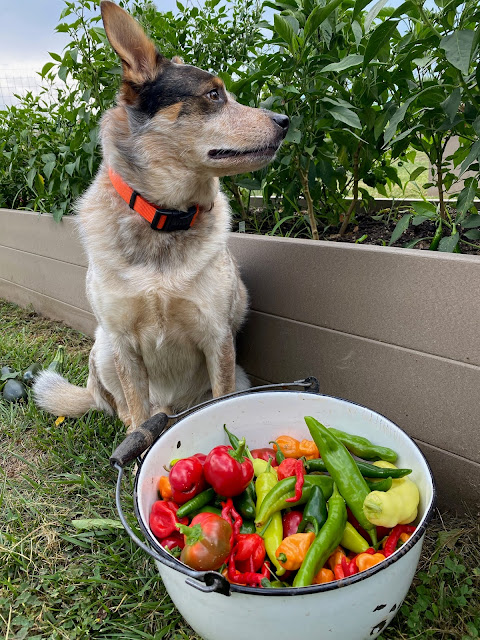 There were peppers, both hot and sweet, 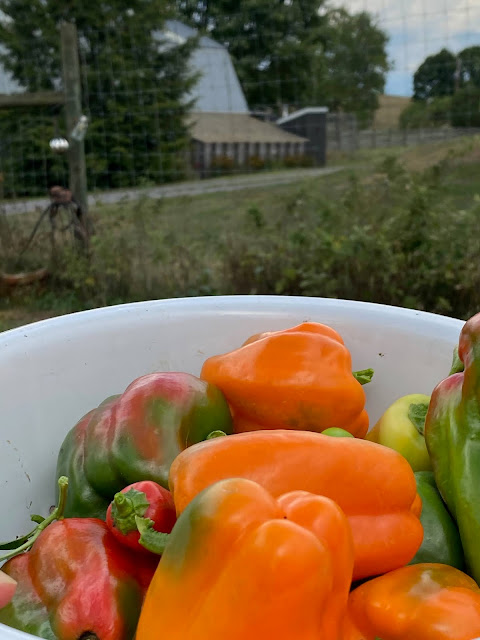 tomatoes, and another batch of Mexican sour gherkins,
which I promptly put into brine to ferment. 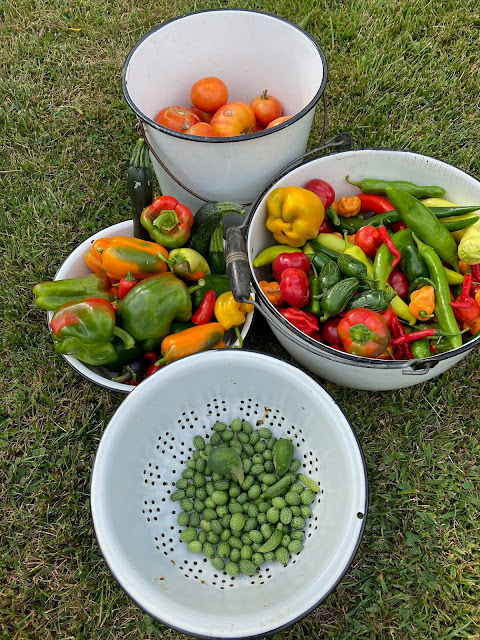 Today I will be working on preserving peppers.
For a period of time I will be in the kitchen sniffing, sneezing,
eyes watering, and more while I work on all of those
hot, hot, hot peppers!
It's a sight to see.

Lisa said…
We are dry! We haven't had any significant rain here in two months. Even artisian wells are going dry. Every year it seems to get worse. No snow in the winter and no rain in the summer. Even the spring didn't bring a lot of rain.

daisy g said…
What a happy ending to the mystery of the roaming runner duck!

jaz@octoberfarm said…
but still no sighting of the duck that laid the eggs? why would she leave the nest? we got rain!!! woohoo! and we might get more today. and hopefully, we will get some from the hurricane this coming weekend.maybe some will make it to you.
August 25, 2020 at 8:24 AM

Marcia LaRue said…
Will be anxiously awaiting the arrival of baby Runner ducklings ... how cute!

This N That said…
So exciting..More Runners..It will be fun to see them grow..Lot's of Thunder above us yesterday afternoon but not a drop of rain..There was a lot of lightning late last night..again ..no rain.Doesn't look very promising...
Happy peppering!!
August 25, 2020 at 11:28 AM

diane in northern wis said…
Wow .....what a load of beautiful, colorful veggies! Lucky you. Although I'm sure it is quite a job preparing them in whatever way you choose. Yea....you're going to have baby ducks soon! So did you have two runner ducks that disappeared? It seems as if one left quite some time ago, and now did you say a younger female duck also left? If so, which one owns all these eggs? Will she come looking for those eggs? Can't wait to hear more about this!
August 25, 2020 at 10:21 PM

Lynne said…
Someone once told me to chew on a tooth pick when cutting up onions . . .
It worked . . . although now my body must be accustomed to the onions
I have been cutting up, for years. No runny, drippy eyes for me anymore.
No toothpicks used either.
Might work for hot peppers??