July 29, 2020
Until his passing, earlier this year,
our orange tabby barn cat, TomTom,
would greet us each morning in the driveway on the way to the barn. 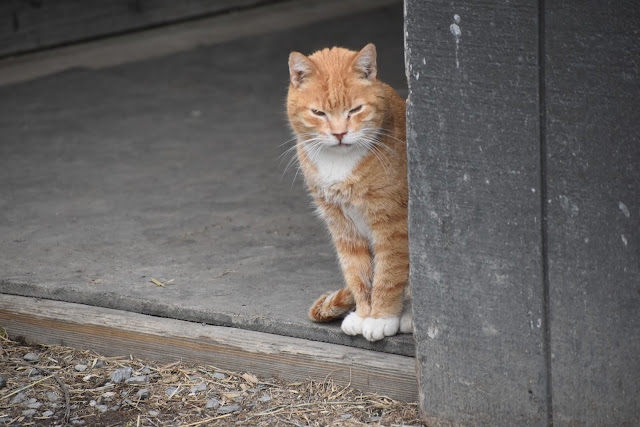 As barn manager, it was his duty
to make sure we were headed directly to the barn
in order to serve up breakfast for all of the barn cats...
and especially for him!
After Tommy's passing, Griz took on the barn manager role.

Each morning when he hears us rolling down the driveway,
he leaves the barn and heads out to greet us...
timing his arrival in front of the sheep pen at the same time as ours. 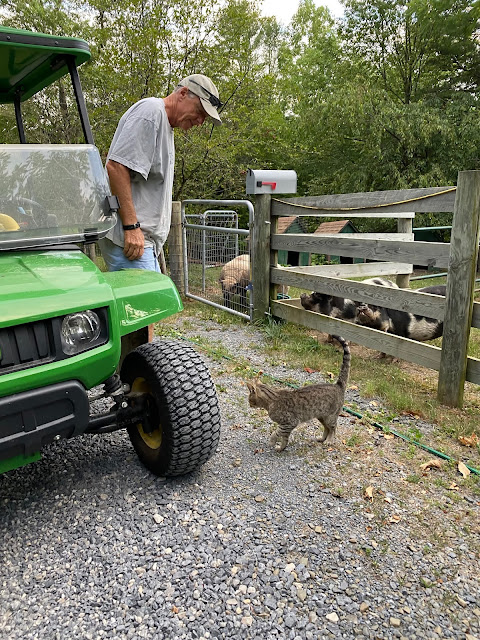 He says "good morning" and reminds us that there's no time to waste.
Hungry cats need fed! 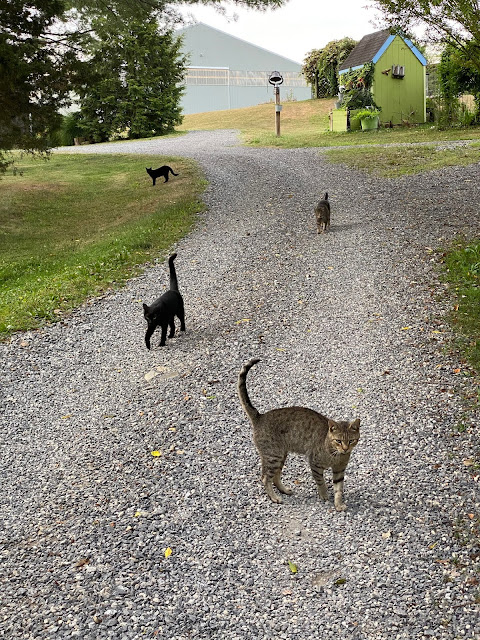 He runs ahead of me, turning to make sure I am following.
And of course I am. 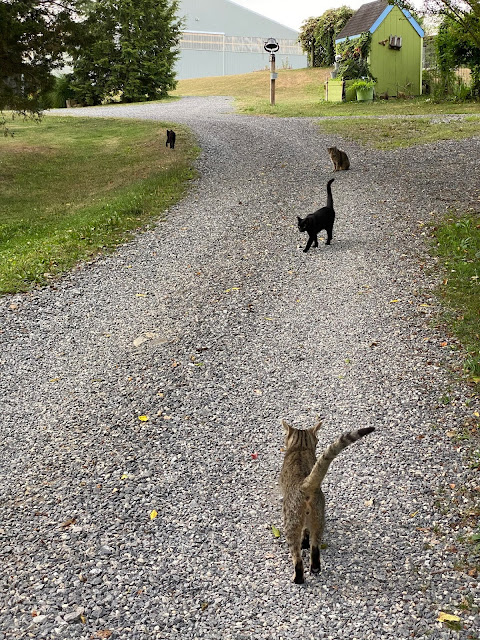 The barn cats have dry food 24/7...
but the wet food comes at breakfast time,
and is obviously their menu preference.

Lately we are greeted by all of the cats. 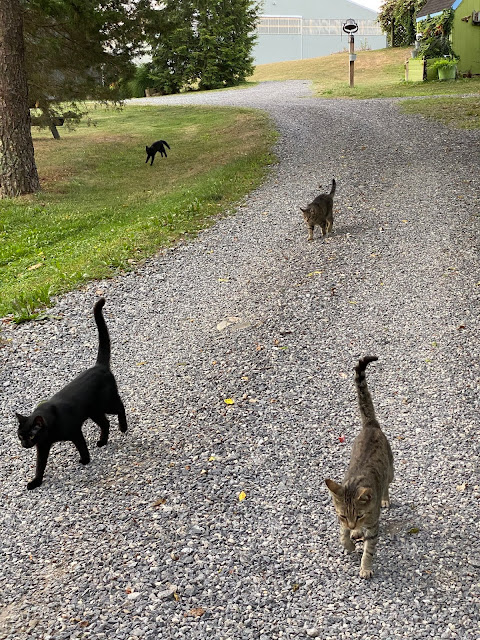 There is a good balance of personalities in the barn now.
Griz is definitely the boss...
but he's loosening up a bit and now plays with the two black Beatrixes. 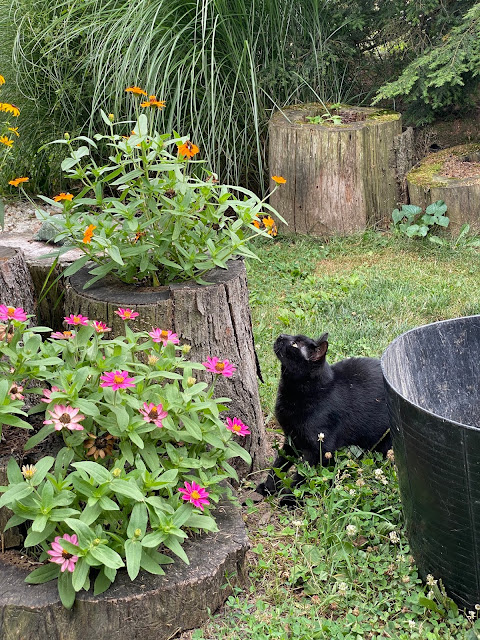 I've noticed that Bea-2 is quite a butterfly hunter.
She'll take off running across the driveway if she spies one
close enough to the ground to pursue.
In the photo above, she is intently studying a tiny butterfly
that landed on the zinnias.

Earlier this week, Dr. Becky arrived at the goat pen for feeding time,
with a birthday cake in hand. 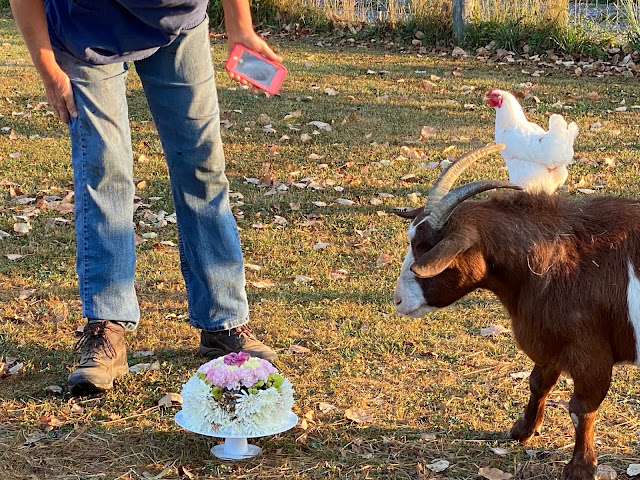 She set it down in front of O'Malley and we all sang Happy
Birthday. 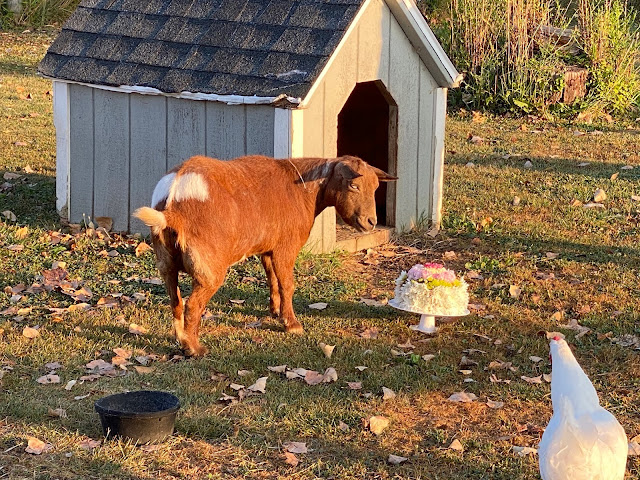 Sally wasn't in the mood for cake so early in the morning. 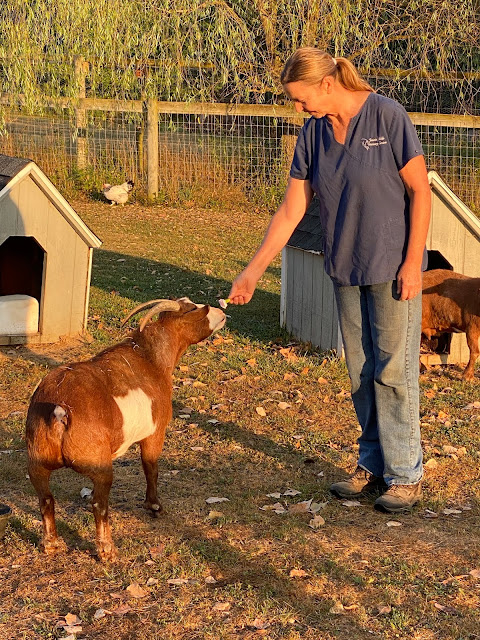 As it was, the cake went untouched... picky goats!
It's not every day they get served a tasty flower cake! 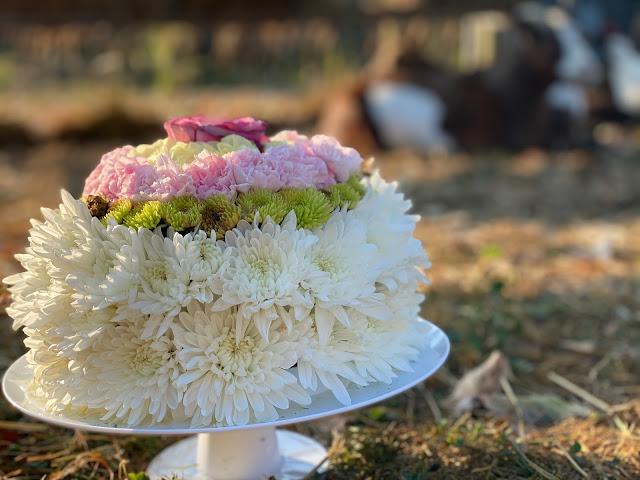 Late this spring two pairs of hummingbirds arrived at the house
and began feeding at the feeders.
Now that weeks have passed and their babies have grown,
we have so many hummingbirds.
They are a constant source of joy and entertainment...

colleen said…
Dr. Becky sure know how to make a cake!! Love seeing all the hummers. You are so blessed with everything you do... nothing is done on a small scale :) xoxoxox
July 29, 2020 at 8:09 AM

This N That said…
Awww..sweet TomTom..Looks like Griz brought his backup..The cake is gorgeous..id Becky make it..Looks to pretty to eat..at least, that's what OMalley thinks...How old is he??
Love your Hummers..I gave up..I saw one in my garden yesterday and one chasing a Finch last week..
xxoo
July 29, 2020 at 11:15 AM