Life On The Frozen Tundra

January 21, 2020
Perhaps one of the most important ways to make it through
the wintery days on the farm is to have an occasional day-off from farm chores.
Sleeping in (relatively speaking) and starting the day slowly
truly recharges the batteries.
And so, on occasion, Jack and I give each other a day off from the work.
Because we had guests to tend to on Sunday morning,
he did the chores while I worked on getting farm breakfast ready. 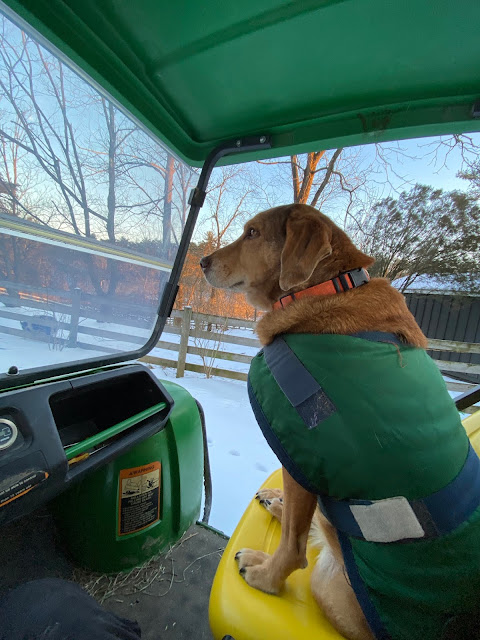 It only seemed fitting that I reciprocate,
so I did the morning chores solo yesterday morning arriving at the barn before the sun. Even when we do chores alone, we aren't really alone.
Of course I had my sidekick who loves to ride shotgun.

I spread hay in the snowy front pasture and turned the horses and donkeys out
there for the morning. 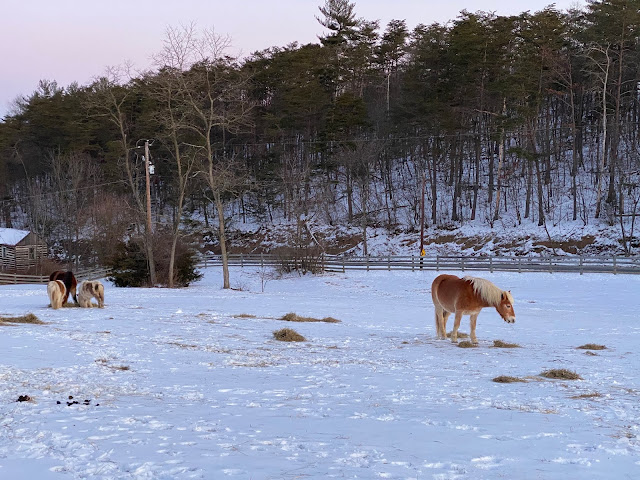 Of course, not loving snow, or wind, or rain, or any deviation from
a perfectly hot, sunny day, the donkeys retreated to the barn.
Being the softy that I am, I gave them some hay to eat in the barn stall.
An hour later it was clear that they had no intention of venturing out into the pasture,
so I put a little more hay in their house.

Cats fed, pigs fed, manure cleaned up, ducks and guineas tended to...
we (the dogs and I) headed up to the chickens, goats, and turkeys.

This part of the farm looked deserted, as no one was too interested
in venturing out into the snow. 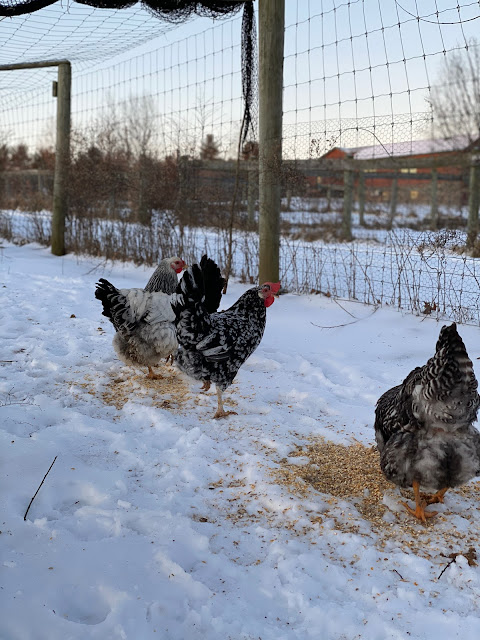 Only a few brave souls were interested in the scratch that I had spread.

Everyone was fed and watered and cleaned...
and muck buckets were taken to the compost pile...
so we headed down to the duck pond to check on the last of our feathered friends. 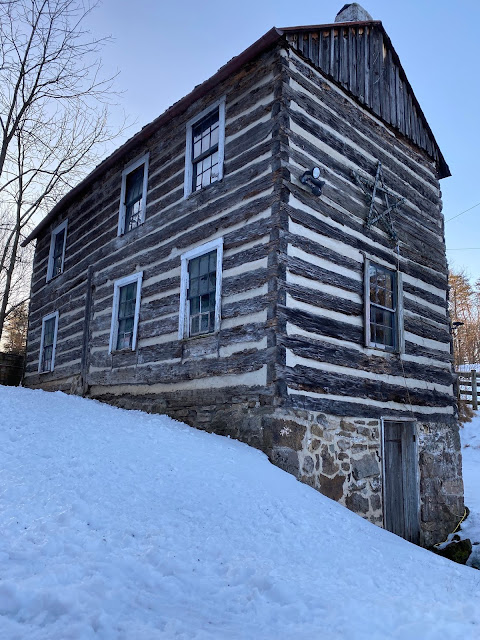 Of course, we had to make a pit stop at the pig and sheep yard. 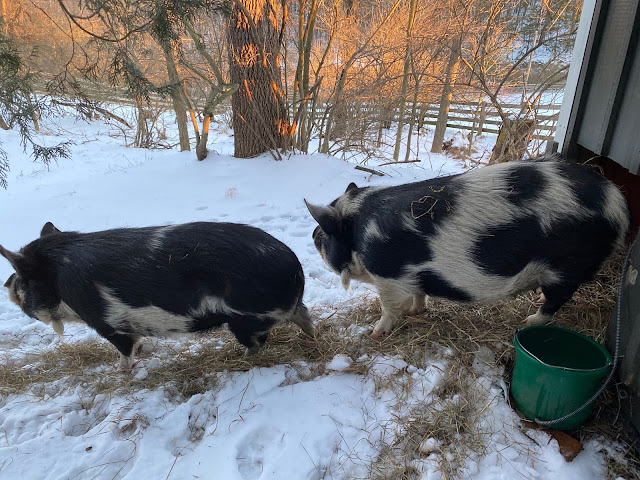 The pigs stay inside their house most of the time,
but as you can see - they have worn a path through the snow to the treat corner. 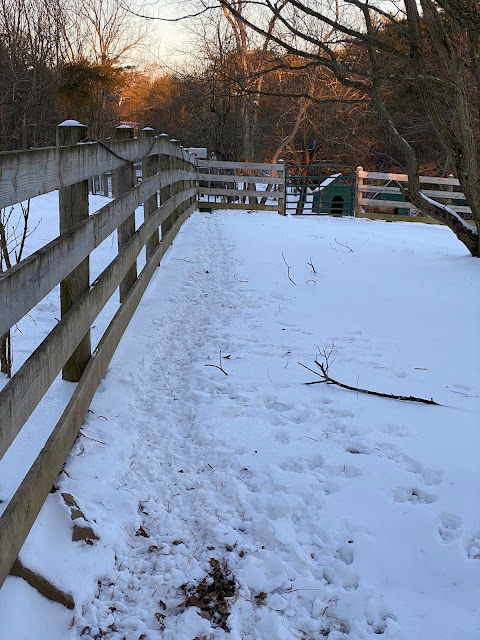 I can't just pass by without handing out treats,
so we stop and visit for a few moments - 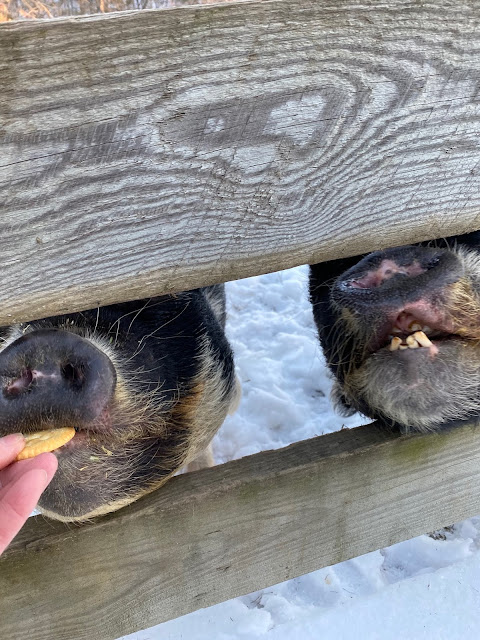 giving everyone a yummy cracker, 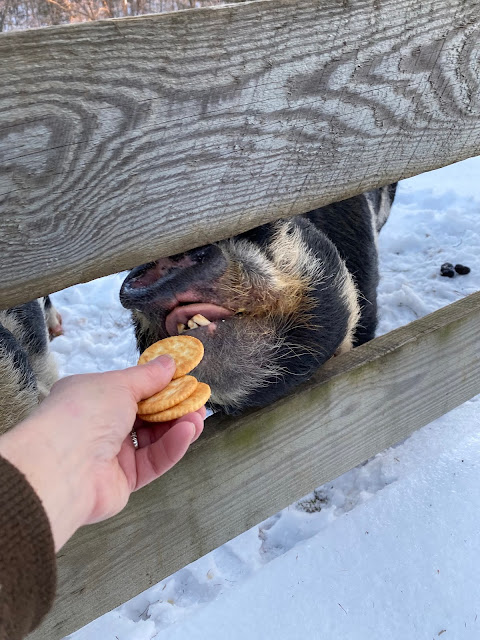 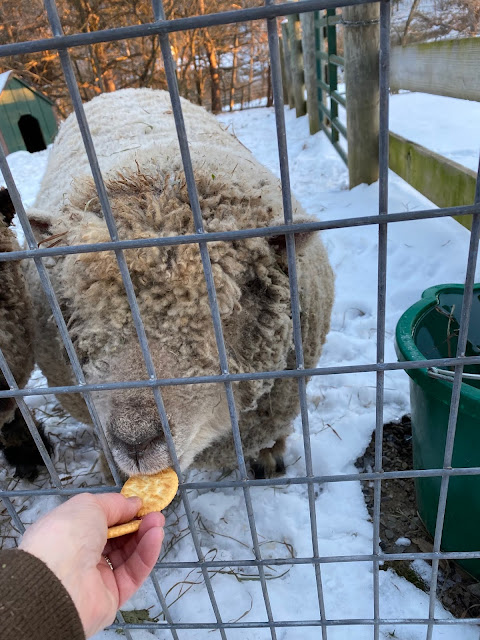 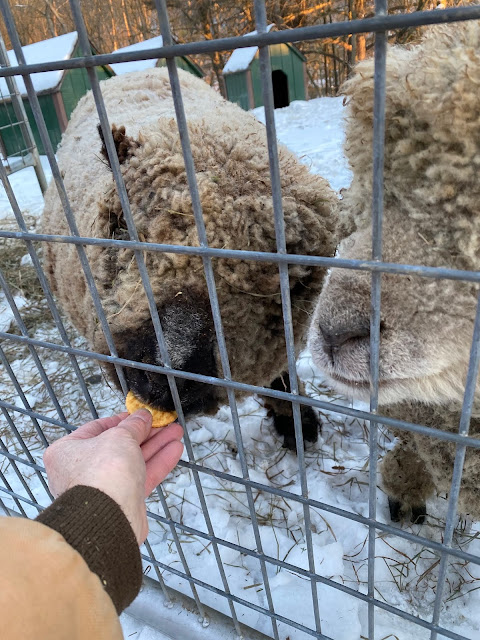 Even the pups get a treat.
Sammie, with his very soft mouth... 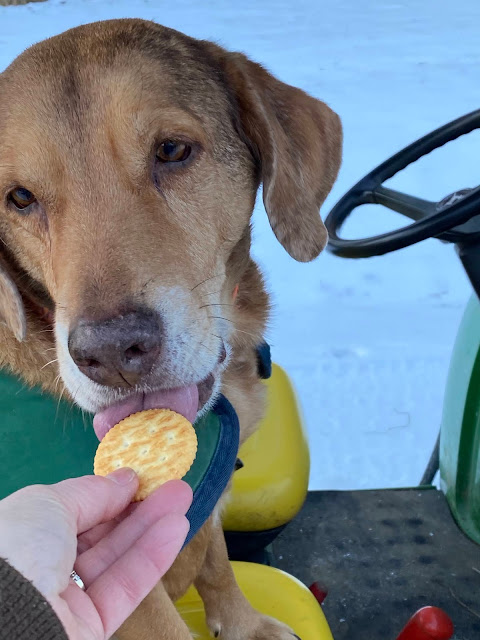 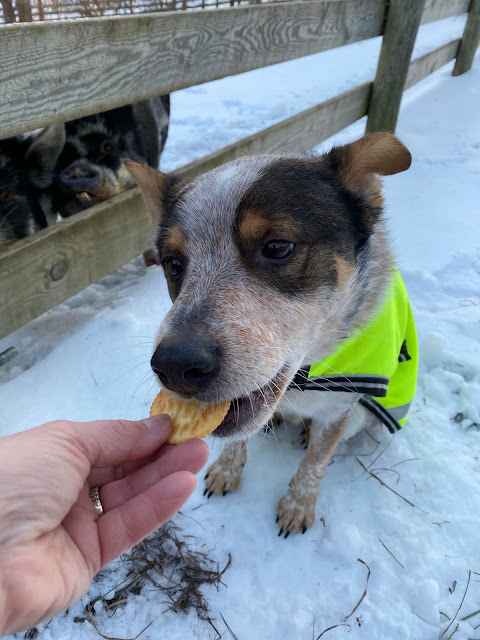 Annie just about takes off my fingers -
sometimes she forgets her manners. 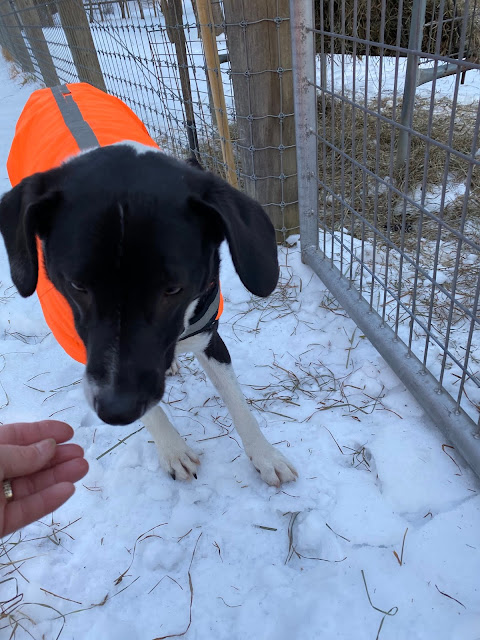 At the duck pond,
our three resident ducks were eagerly awaiting their breakfast...
their food bowl empty... 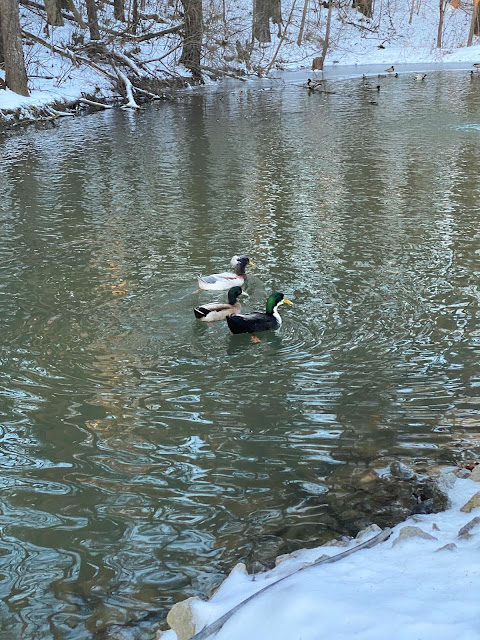 most likely due to the 16 visiting mallards that were happily swimming around
on our non-frozen pond
(due to the aerator that we have bubbling away preventing ice from forming). 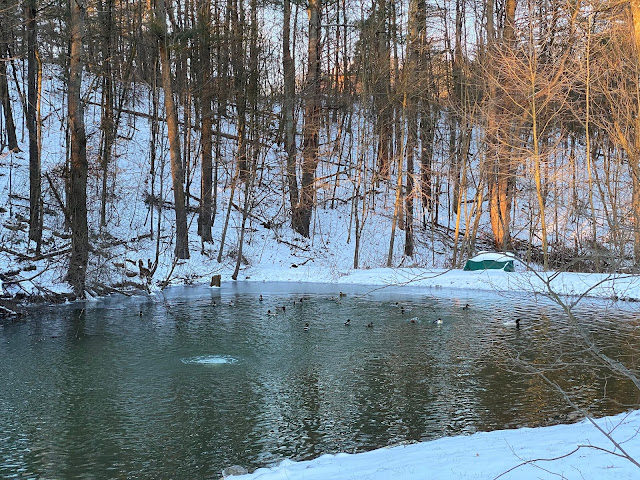 With chores all finished, we headed up the driveway past the front pasture.
The sun was now well above the horizon...making for a great photo opportunity. 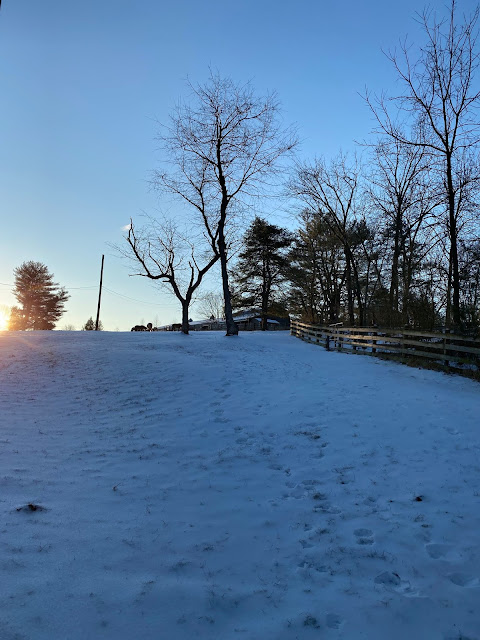 I climbed the pasture fence and hiked up to where the horses were eating. 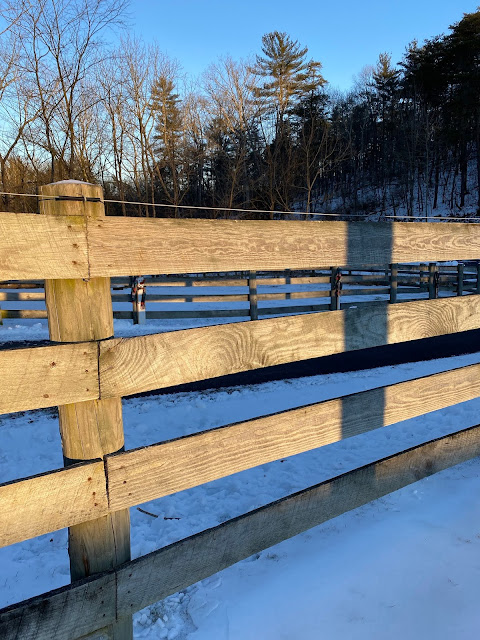 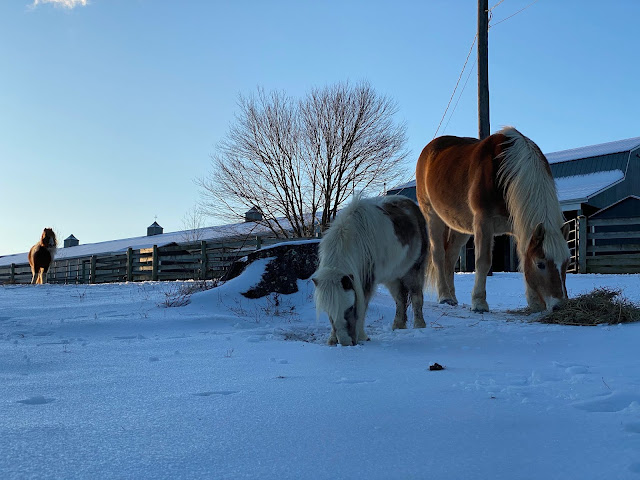 I'm not sure why the ponies would rather scratch in the snow to find
some grass beneath it, when there is plenty of hay available on top of the snow. 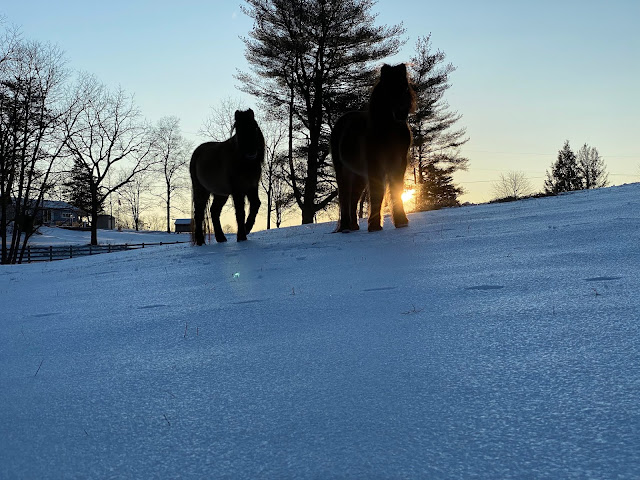 With me lying on my stomach in the cold snow,
I took a few photos.
The scene was curious enough to stop the ponies from their digging and they
walked over to where I was lying. 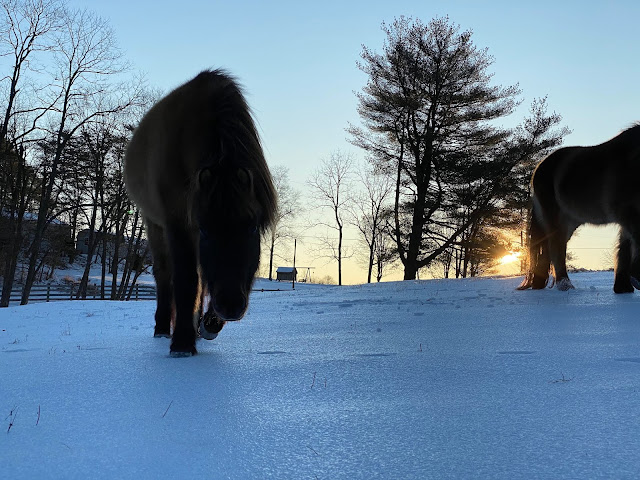 Donnie joined the others in eating while Scarlet continued on
and came over to nose me. 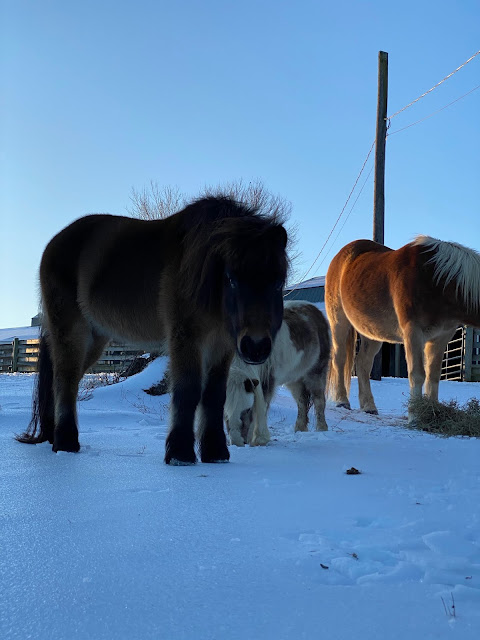 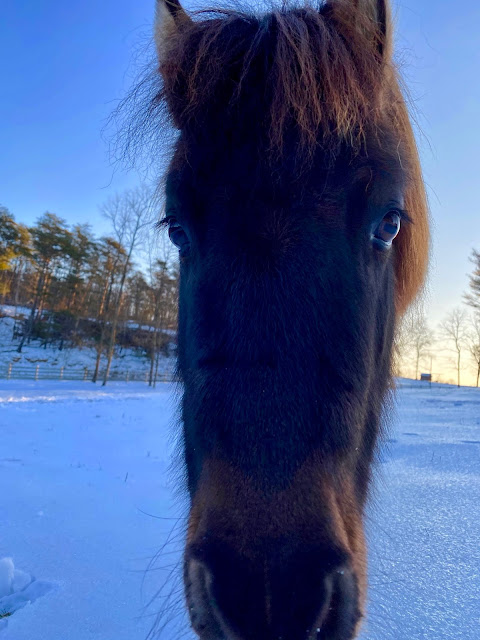 I got up on my knees and gave her nose a kiss and then she pretended to bite off my nose.
She's a sweet pony... but would never want you to think so.
She prefers a sassy reputation. 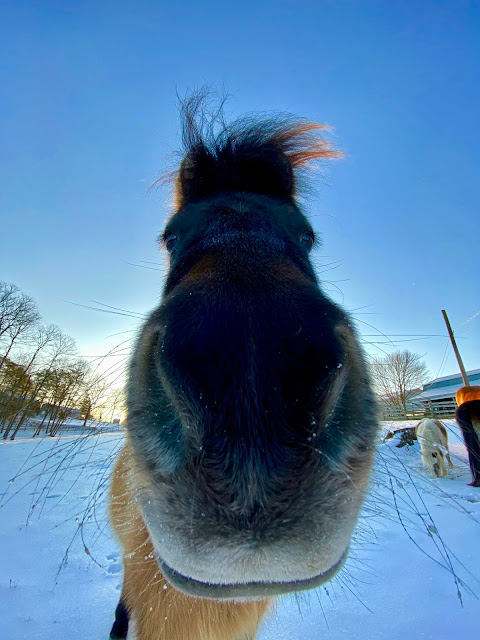 With that I headed back to the house where I found Jack busily working in the kitchen...
a load of wash already started.
I am very lucky to have a husband who sees housework as a joint task.
I never have to ask for help... he's always way ahead of me!

Here is a quick video that Jack took a couple weeks ago...
[Link to video, HERE, if needed]

Karla said…
Wow, Bev! Your days start early and COLD! I love it that your Hubs is a true partner, and needs no instructions. There are just things that need to be done, not HIS things or HER things. My Hubs and I have the same deal. It is just who gets there first. There are some things he does, that I don't really have the skill to do (outdoor low voltage lighting, for example) but other than that, all chores are shared. Our friends marvel at this arrangement. We are both fortunate that we have this shared mindset, and yet this is intentional. Thank you again for sharing your days with all of us. Karla from Illinois
January 21, 2020 at 7:50 AM

jaz@octoberfarm said…
it's cold here too but hardly any snow....bummer. i love that video. tongue scoop! i'm making soup today. it is soup weather for sure. have fun with the little ones!
January 21, 2020 at 8:53 AM

Patsy from Illinois said…
I love Sammie!! All of your other critters are great but I have a special place in my heart for that big brown dog.
January 21, 2020 at 10:09 AM 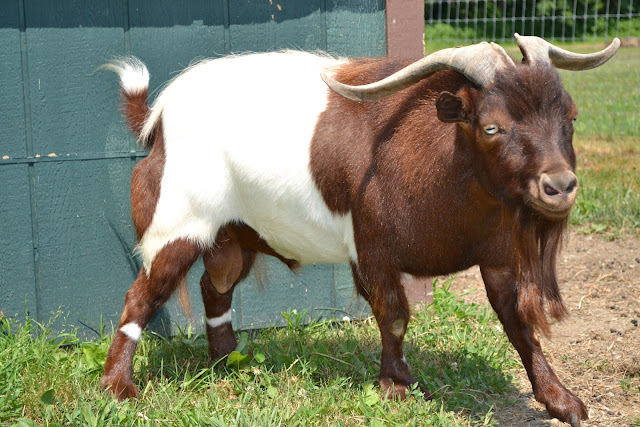 There was a day when I spent a little time in the gym...not a lot, mind you, but a little. Those days are gone. Long gone.
I've traded in the spandex for denim, the cute little running shoes for muck boots, the nautilus equipment for 50 lb. bags of feed and bales of hay!
And the toned, rippling muscles of those body builders that populate the gyms for this....
The Muscled Men of BHA Fitness! (LA Fitness, eat your heart out!)
Meet Fred, who holds the current title of "Mr. Goat America"...

Fred loves to pose for the camera, flexing his muscles... showing their definition and bulk.

Next to strut his stuff is ole "one-horned" Chip. Chip is a four time winner of the "Strongest Goat in the World" competition! Here he is rounding out his shoulders to show you his back muscles.

And flexing his glutes, quads, and hamstring muscles....

Oh, how these boys love to show off!
Seriously, though, Fred and Chip are two of our fainting goat bucks. What makes them so … 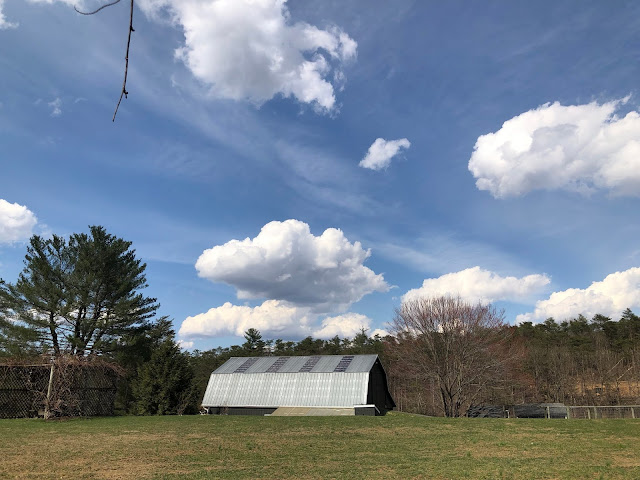 A Story I've Hesitated To Tell

A couple of weeks ago we had a tragedy here on the farm. It's taken me this long to get up the courage to write about it. At first, I just couldn't write about it... too painful.

However, now that time has passed and the pain has eased, I can tell you the story. It's not a happy story, and it doesn't have a happy ending. So, if you are not in the mood.... please skip this portion of today's blog. In the interest of keeping this blog real...and telling the whole story... here goes....
It was morning chore time... a very busy time indeed. While we work, we try to keep our ears on what is happening all over the farm. We keep our finger on the pulse of all of our beloved animals, so to speak.
This particular incident was one of those that happens so fast, there is no way to prevent the outcome. You see... a fight broke out between sweet Bobby cat and one of the little black kitties (Pissy, I assume). Now, Bobby (although he looks innocent) is often an instigator.