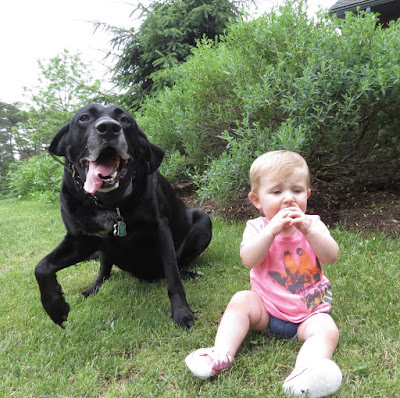 "Black Sammy", as we have dubbed him....to distinguish him from our "Brown Sammy",
is staying with us for a few days.
He has been here several times throughout the summer. 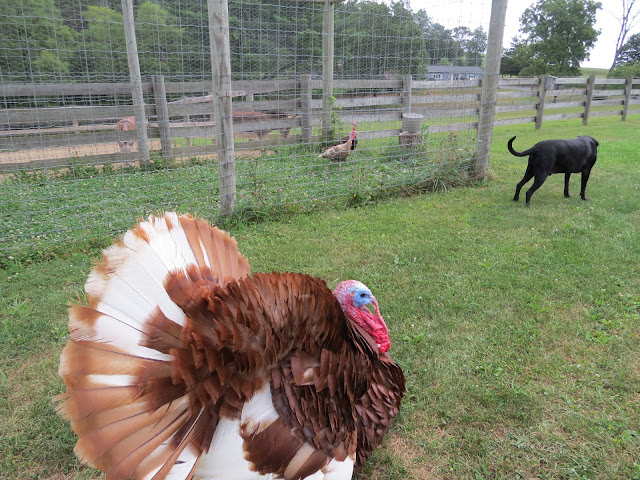 We love having him as much as he loves to come to the farm!

When he is here he becomes one of the pack...
taking part in each daily activity as if he lived here full time.
He is completely farm-worthy and knows to treat the animals with utmost respect. 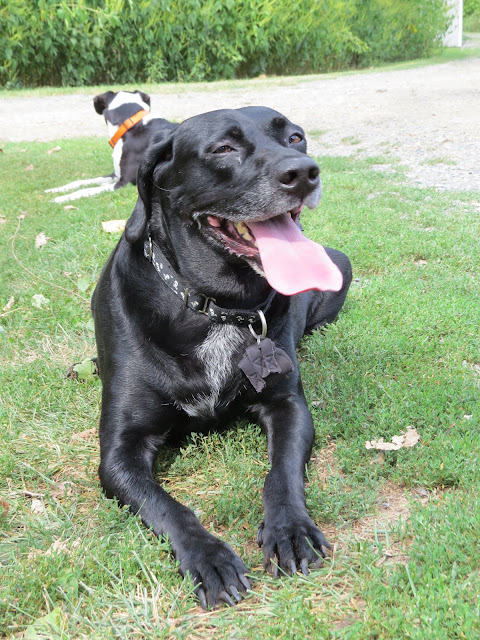 As I looked back through all of the photos that I have taken of him,
I realized that in each and every one of them his tongue is hanging out... 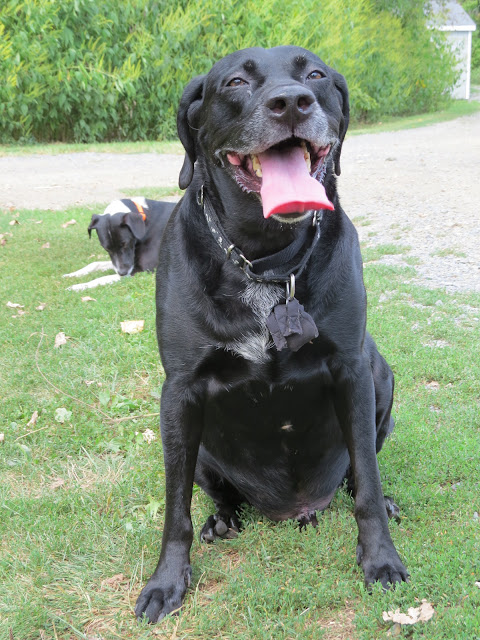 He gets a lot of exercise when he is here following me around like a shadow. 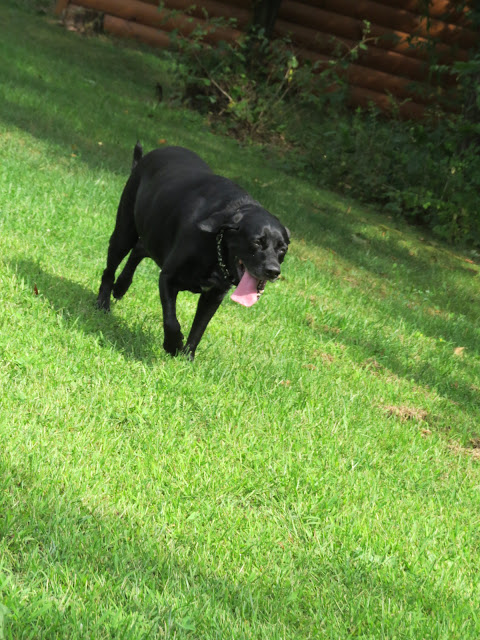 Sammy is part labrador retriever and part coon hound,
so his bark is that of a hound.
It's also his prime means of communication.
Needless to say, I try to anticipate his needs to minimize his need to do this:


Sammy's mom and dad adopted him from a shelter as an adult dog,
so his bark came along with him...
and I don't think it's going to leave.

He is as gentle as can be with Mackenzie and doesn't even flinch when she crawls on him.
He allows her to take balls out of his mouth. 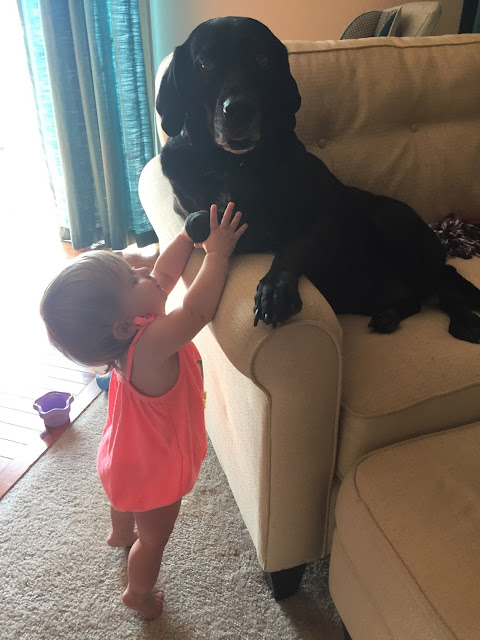 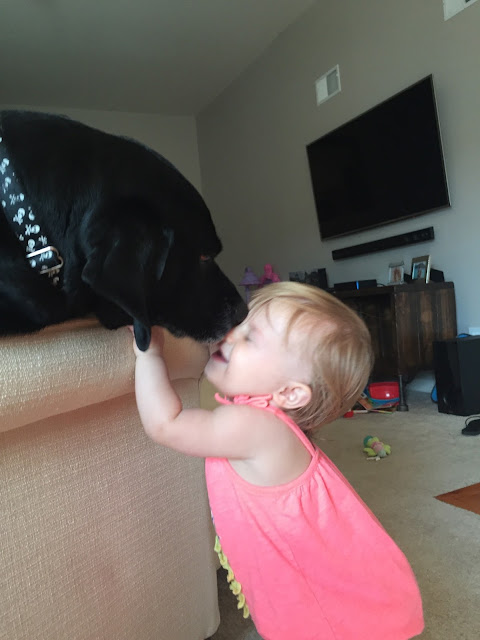 Hopefully he won't want to give her kisses right away when he gets home...
as he has eaten his fair share of manure and chicken poop while here on the farm.
Why do dogs do that?????

PS....I humbly thank you for your generous comments yesterday.
You are such good people!!

PPS.....tomorrow is our wedding anniversary.
"Happy Anniversary Hubbs....you are the best part of every day!!"

Dawn said…
Black Sammy is lovely and looks a bit like my Sol, Sol is very quiet and dosent bark a great deal, as for the manure etc yes he is partial to it as well I asked the vet about it and he said its fibre :-)
August 26, 2016 at 4:52 AM

colleen said…
Those pics of Sammy and Mackenzie are priceless!!
I didn't get to comment on yesterday's post.....don't ever stop! I agree with EVERY comment that was made yesterday. I start my every morning with BHA and coffee.
August 26, 2016 at 5:49 AM

JudiB said…
LOL>>Wow..a Lab to look at with a voice like THAT..lol..lol Lucky McKenzie to have such a great friend. I bet he enjoys every visit. What a great change of pace coming to the farm.
Hope the heat wave has past you..we are still in the zone..ugh!! Lasting to long this year but come winter I will have a different tune..lol.

McKenzie looks like she is one busy gal..and so adorable. She must have a ball touring the animals with you. What a great age..busy..busy ..busy..!!!

Anonymous said…
hi beverly...the sharing, laughter, arresting personalities, labor, realities of all life, the love...please do not stop blogging...best wishes for a happy wedding anniversary to you and your hubbs...hugs to all...take care...sally
August 26, 2016 at 6:59 AM

The JR said…
I had a big ol part labby dog a long time ago. He was MY DOG. Loved me. I miss him so much.

Sammy is a good dog and it's wonderful you can trust him with that baby.

Candice said…
Lucky Sammy...what a great vacation he gets when his family goes on theirs! Happy, Happy Anniversary to you and Jack!
August 26, 2016 at 8:08 AM

janie said…
Happy Anniversary to you and your hubby!!

Please " keep on trucking" with your blog. Your grandbaby and grand fur baby are adorable!!!

This N That said…
Happy Anniversary..Both Sams are so loving...Great dogs..Nice that everyone blends..Black Sams nails look long? Have a fun weekend..
August 26, 2016 at 10:04 AM

This N That said…
PS...My Sammie used to roll in anything that smelled bad..Dead fish, manure..you name it..Glad he doesn't do that..

Laura Sudderth said…
Happy Anniversary to you both! Have a lovely weekend. My parents celebrated their 55th on August 25th. They are two peas in a pod at this point!
August 26, 2016 at 11:31 AM

jaz@octoberfarm said…
mackenzie and sam are too cute! happy anniversary and have a great weekend!the rehearsal dinner is one week from tonight...gulp!
August 26, 2016 at 6:28 PM