The Mistake of Asking For a Little Peace and Quiet 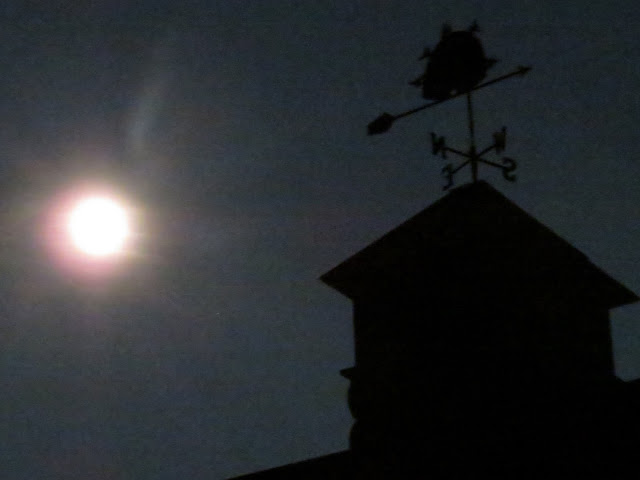 and I am sitting here at my computer for the first bit of "down time" that I have had all day,
as a beautiful full moon hangs in a warm summer night sky. 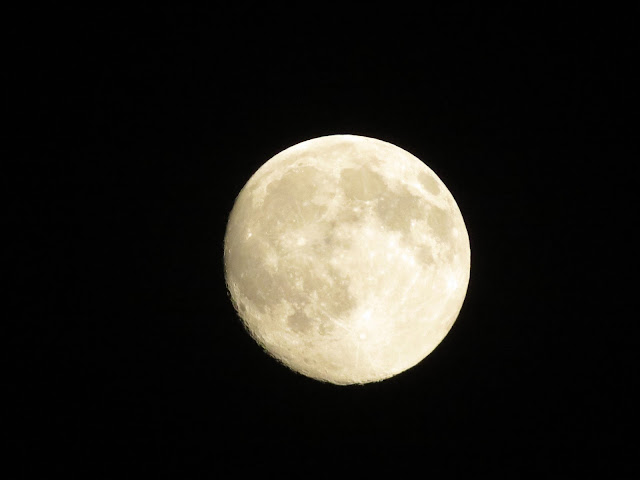 Don't be fooled by that peaceful full moon outside.
It's been an evening that was less than peaceful!

It started after dinner, when Hubbs (aka Muppy) volunteered to take Tyler to the
pirate ship for a little play time...giving me a little time to clean up the kitchen
and commune with my animals. 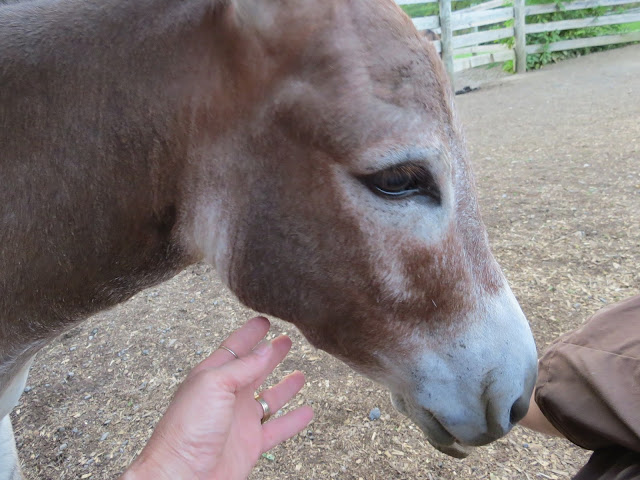 I decided that a trip to the donkey yard might be just the peaceful thing that I needed.
(Five year olds can exhaust you just by the fact that they spend the entire day
talking to you!...and I mean incessantly.) 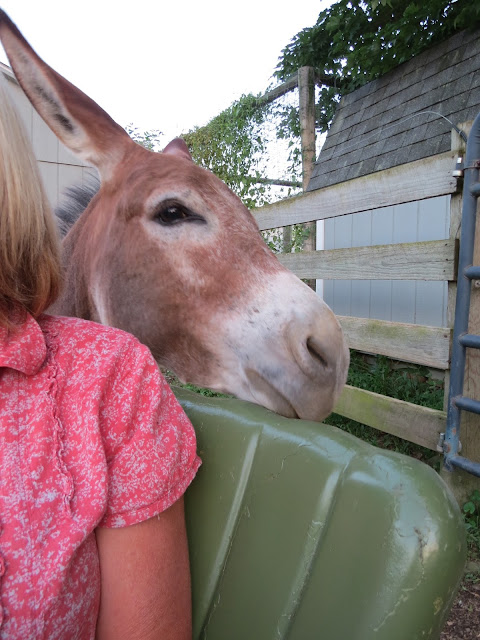 I was sitting there with Chloe and Daphne in a mutual grooming session...
you know...
you start by scratching one of them and they in turn scratch the other,
who then decides that perhaps you need a little scratching (nibbling) as well. 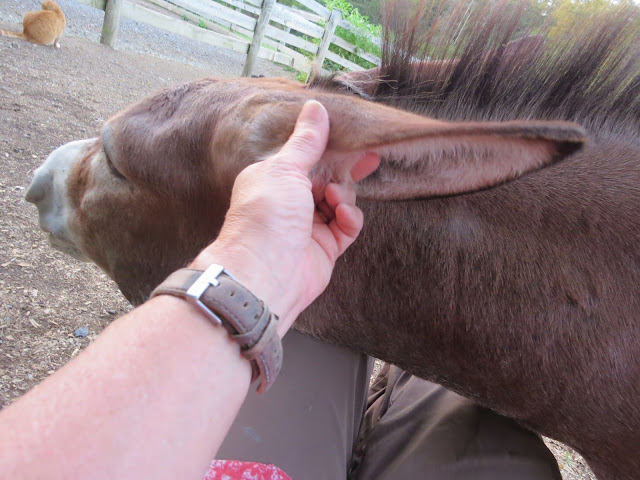 So, while you are sitting there in a donkey love fest,
you have to be aware of where everyone's mouth (teeth) happen to be at
every moment.
Donkey grooming feels an awful lot like a rather hard pinch! 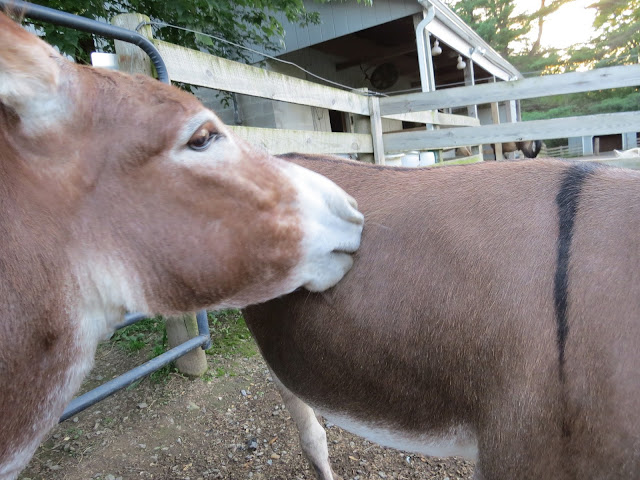 I was just getting to the point when I thought I would go find the boys,
when Tyler came running into the barn calling for me...
with a rather important story to tell.
Muppy quickly condensed the story.
Annie and Oakley had collided head-to-head in a rather exuberant game of fetch,
and Annie came out on the losing end...
her nose ripped open by Oakley's teeth (accidentally.)

(Here is where I must offer the obligatory warning....
the following pictures are very graphic!) 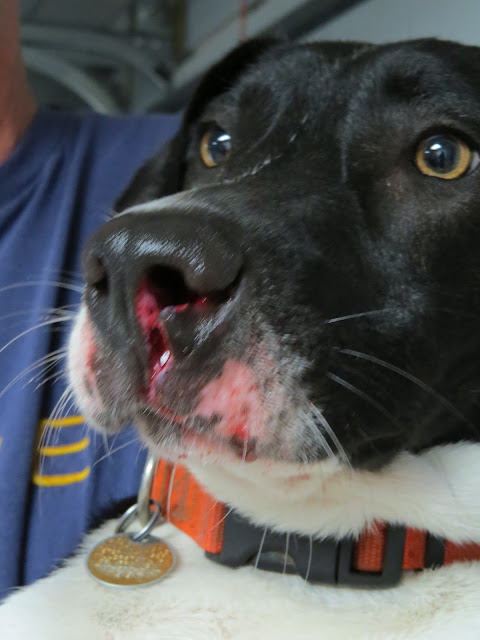 We immediately headed up to Dr. Becky's (Hubbs' sister and our farm vet).
Of course with all of the excitement, the turkeys felt obligated to follow us.
Hubbs called them the EMT's....Emergency Medical Turkeys! 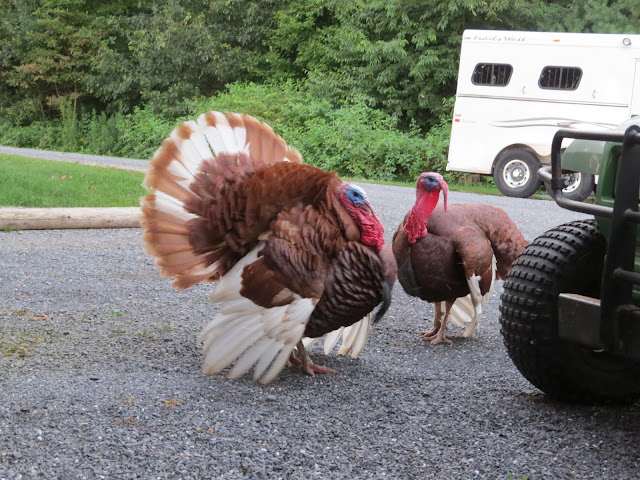 Into Dr. Becky's garage we went...
trying to get Annie in, while keeping this fellow out. 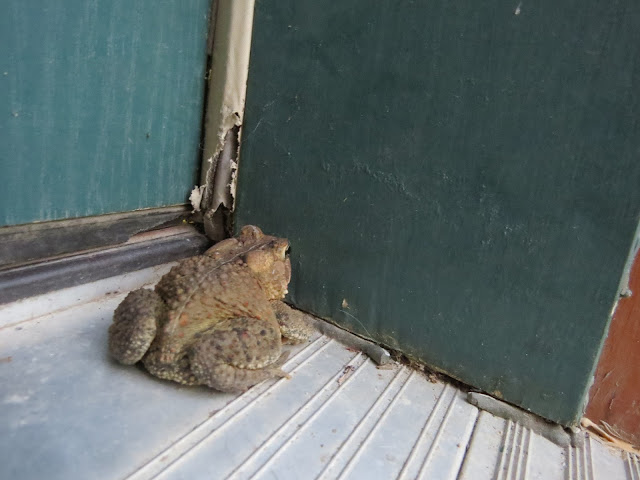 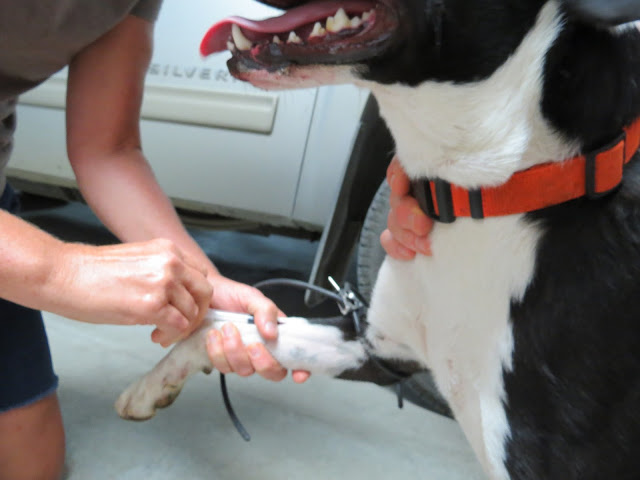 checked the damage (as Tyler chatted on and on about what had happened), 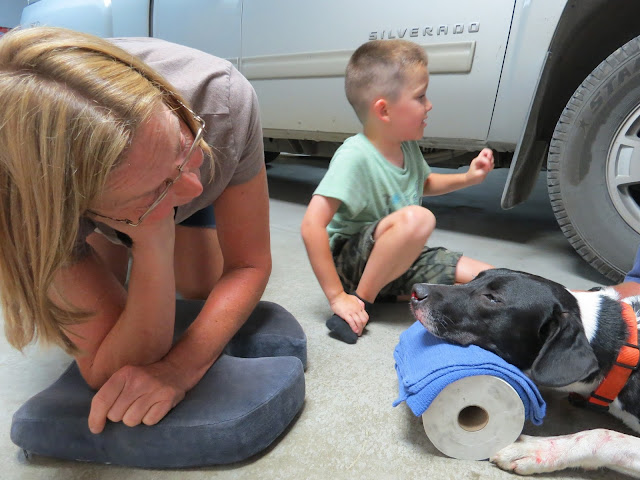 and set about to stitch her nose back together. 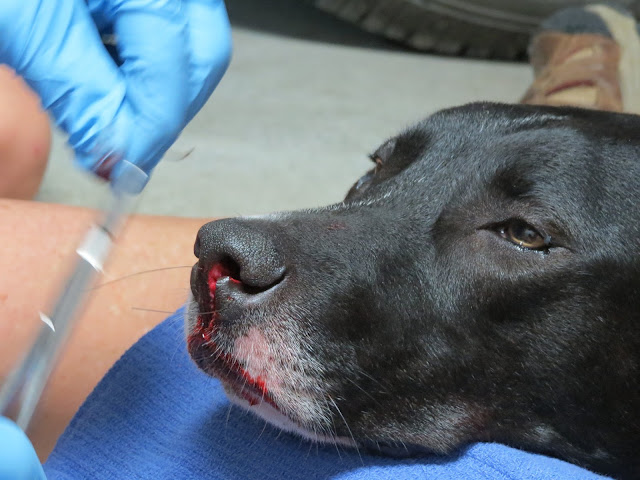 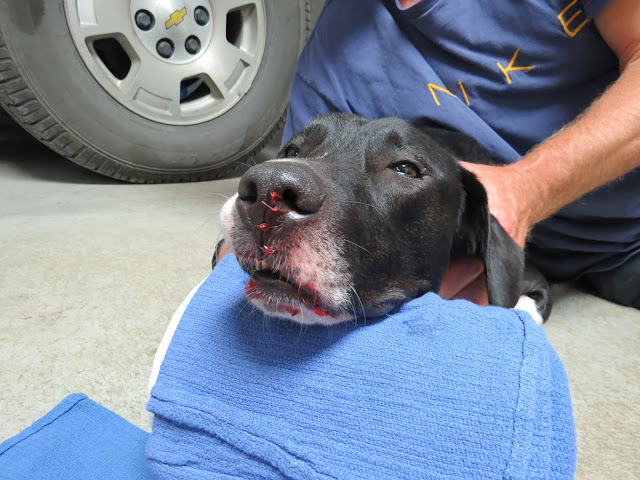 Once the sedation was reversed, we headed home again.

My "down time" was anything but relaxing.
But then...that's sort of how life is...
it's best to always expect the unexpected!

Many thanks to our friends Jim and Kathy for taking care of closing up the animals
while we tended to our wounded pup!
(You guys are the best!)

We will be watching Annie very closely for the next few days and giving her
prophylactic antibiotics.
Updates to follow.

colleen said…
Ouch!! Thank goodness Dr. Becky lives close by. All in all it sounds like Tyler has had a spectacular week.....however I think you are going to need a mini vacation to get rested back up. Hope to hear on Monday that Annie is doing much better. Have a great weekend.
July 31, 2015 at 6:23 AM

GeorgiaHoneyBee said…
Oh no! Happy to hear that Annie is all patched up! I have a question for you. I am about to get chickens for the first time since my childhood. I want them to be able to "free range" but I worry about them getting away from me, or leaving our land, etc. Do you think the temporary sheep fencing you used when you first got the lambs would work for coraing the chickens? I was thinking I could move them around my yard each day if I had flexible fencing like that. Have a great weekend!
July 31, 2015 at 7:35 AM

Patsy from Illinois said…
Poor sweet Annie. Hope Oakley doesn't feel too bad about the incident. I think they both deserve a special treat. Lol.
July 31, 2015 at 8:06 AM

Candice said…
Poor Annie. As Colleen said...you are so fortunate Dr. Becky is nearby. What an exciting week Tyler has had...great memories of time spent with his Grammie and Muppy.
July 31, 2015 at 8:14 AM

Angelsdoor * Penny said…
Poor Annie! It hurts just to look at her nose... You sure are fortunate to have such a good vet as Dr. Becky nearby. Yes, so much for downtime... I hope today is peaceful for you.
Thank you so much for coming over to meet little piglet... I thought she might give you a smile.
So happy you enjoyed!
Take it slow today.
fondly,
Penny
July 31, 2015 at 10:50 AM

Thefarmerswife said…
Oh Poor Annie! Hurts just to look at her. Hope all of you get plenty of Rest and Recuperation this weekend.
July 31, 2015 at 9:11 PM

Country Gal said…
Oh that looks sore poor thing . These things happen when animals play . I hope Annie gets better soon . Thanks for sharing , hope you have some down time this weekend !
July 31, 2015 at 9:19 PM