A Day of Tales

July 27, 2011
Yesterday, on my way out to do afternoon chores, I was met at the garden
by Bobby, the most adventurous of our barn kitties. 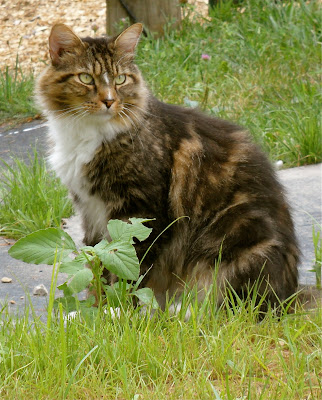 Quite pleased with himself, he told me a tale of how he had
chased two bunnies who had come into my garden for a nibble.
He had gotten so close to one of them that he had snagged that bunny's shadow.
"Piffle!" I laughed and said that was "impossible." 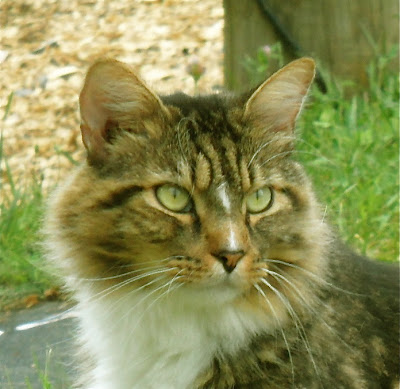 But Bobby insisted it was so and led me to the evidence.... 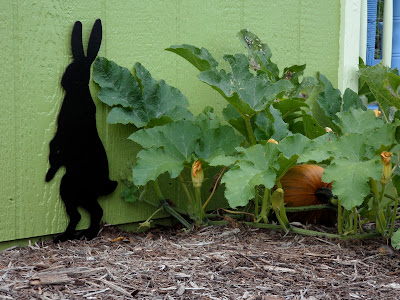 He HAD snagged that bunny's shadow, indeed!
Well, like Wendy did for Peter Pan, I guess I will need to find that bunny
and sew his shadow back on him!
A little further down the lane, I was met by Tom and Chuck.
They were searching for Edith, who had disappeared hours earlier. 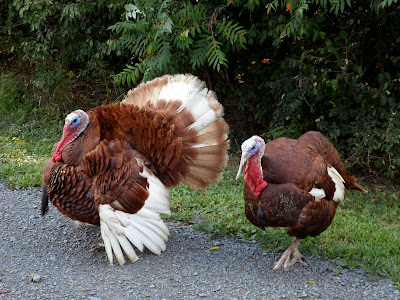 "Where could she be?" I asked the birds who had gathered round.
Guido and the guys weren't talking. 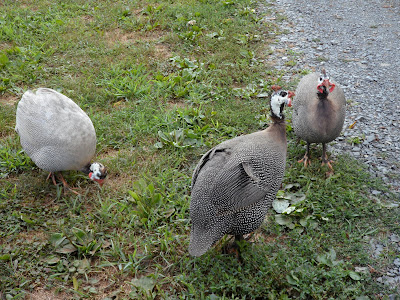 I feared something "fowl" had happened to Edith.
I asked old Roy if he had seen Edith, but he just shook his head and walked away. 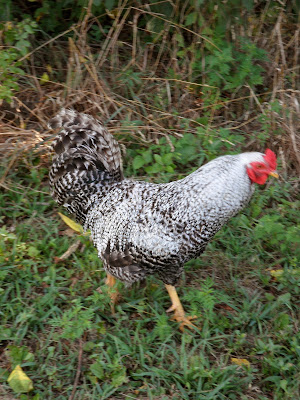 A couple of hens started squawking...
"We know where she is!  She went to the Spa!"
and they proceeded to show me the way. 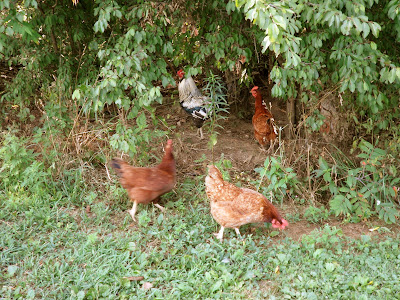 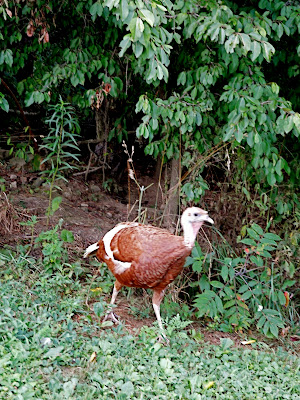 Apparently, she had taken a little "girl time" and spent the afternoon
luxuriating in a dust bath, here..... 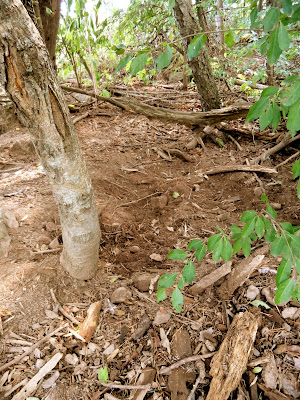 What, you have never had the pleasure of a dust bath?
You really must try it!
There's no better way to control mites than a dust bath...
and so cool on a hot day.
Well, while we are on the subject of mysteries....
look at what I found in one of the nesting boxes.
Someone is getting a little lazy and producing very tiny eggs. 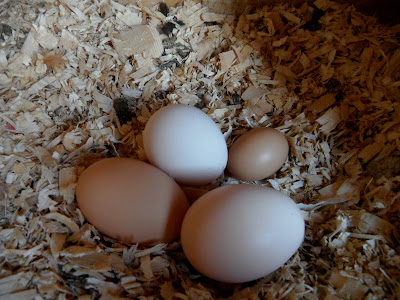 I have been finding these tiny dark eggs on occasion.
No one is owning up to this infraction,
so I guess I will have to open a bottle of wine and sit down with the girls.
A little bit of wine, and the girls start to talk... 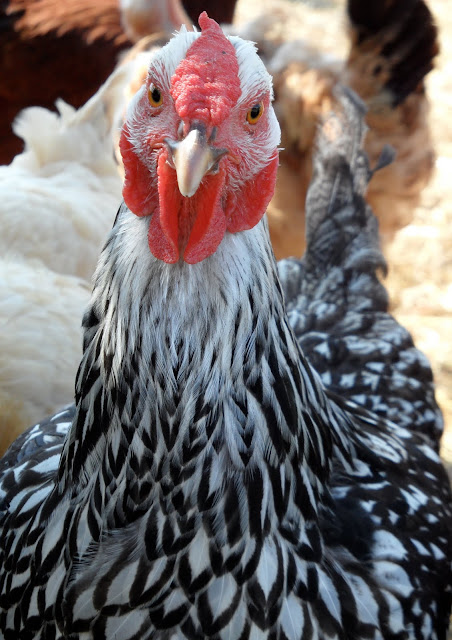 Debi said…
What a good way to start my morning off with this little story. What a cutie with all those little animals lurking about. I don't blame Edith. We all need some "girl time". Keep us informed about the mystery egg. Debi
July 27, 2011 at 5:57 AM

From Beyond My Kitchen Window said…
I'll be driving 40 minutes just one way to get my fresh farm eggs today. It's so worth it, as you already know. So glad Edith enjoyed her spa day.
July 27, 2011 at 6:36 AM

Denise at Autumn Sky said…
Very cute farm story. I love visiting with my chickens too. Those turkeys are just too funny. Are you going to get more to build the flock a little? I know you intended to *gasp* eat them, but their personalities are such fun.
July 27, 2011 at 9:08 AM

Cindy said…
Those animals keep you entertained, don't they? Some of our hens made their spa/dust bath in my flower border. I have decided to not get upset by this. They are just trying to keep cool.
July 27, 2011 at 9:16 AM

Reena said…
That was delightful! Just discovered you from over at This Old House 2 and glad I stopped in! New follower here!
July 27, 2011 at 9:21 AM

Reena said…
That was delightful! Just discovered you from over at This Old House 2 and glad I stopped in! New follower here!
July 27, 2011 at 9:22 AM

Junebug said…
What some tales those darling animals had to tell. How cute is that tiny egg! There must be a bantam hiding amongst your girls. Have a great day!
July 27, 2011 at 9:40 AM

Sheryl Lynn said…
Thank you.... Everyday I just want to tell you thank you. I don't know how I found your blog, since I live in Phoenix and the closest thing I have to an animal is a dust bunny, but it brings me extreme joy. I read it everyday before I start my corporate job. Sometimes it might be the only time in the day I get to enjoy a real chuckle. You should write childrens book. This would be a best seller!
July 27, 2011 at 1:21 PM

Julie Harward said…
Thank you for your visit. This was really cute, I have a Bobby too, loved the shadow story. Dust bath on a hot afternoon..what have I been missing! ;D
July 27, 2011 at 9:18 PM