The sun had just peeked over the hillside, casting tall shadows against the dewy spring grass.  From the hill behind the simple one-roomed cabin, a woodpecker called to his mate with a rhythmic "rat-a-tat, rat-a-tat".  Birdsong filled the cool morning air and travelled through the little valley on a gentle breeze.

As the sun rose higher and the dew began to dry, the calm of the morning was interrupted by the firing of a long rifle in the woods at the top of the ridge.  "I guess we'll be having squirrel or rabbit for dinner" thought Sarah.

With a basket of garments held on her right hip and a wooden bucket in her left hand, Sarah gathered up the front of her her skirts, with the two fingers she had free, so she wouldn't trip as she walked down the cabin steps to the spring house below.  There, after setting her laundry on the ground next to the old wooden washtub, she sunk her wooden bucket into the clear, cold water that bubbled up from beneath the earth.  She ducked her head as she carried the bucket out of the springhouse and poured the sparkling water into the tub.  She would repeat this several times before climbing the stairs to fetch the water she had left boiling on the iron cookstove.

She wrapped the homespun fabric of her apron and skirt around the boiling kettle's handle to keep from burning her hands, taking the hot water back down the stairs to add to her wash tub.  From the top of her basket, she picked up a small parcel - a block of soap wrapped in parchment.  She unwrapped the precious bar of soap, one of just five blocks that she had been able to pack to bring with her on her journey, last year, by wagon,  from the the port city of Philadelphia where she had lived as a child.

In the coming months, she would have to make her own soap from ash and pig fat, but for now, she rationed this bar and enjoyed one of the few remaining luxuries of her past life.

Sarah and Elias had survived that first winter of 1768 here in this wild land, far to the west of everything they had ever known, partly on the provisions that they had packed in their wagon but mostly on the grit they had both possessed.  Hunting was plentiful in the colony and Elias had been able to keep them supplied with meat.  What they had not been able to bring with them, they supplemented with goods they could buy at the tavern/general store a mile away.

Ten years prior, there had been no homesteads in the area.  But in the subsequent years, land was purchased from the native peoples and settlers began building new lives here in the heart of the territory known as Penn's Woods.

Arriving early the previous summer, they had hand-built their simple cabin from the ash trees they had felled for that purpose.  Sarah started a garden with the seeds they had brought with them and they worked together to fence in a small parcel for the cow and two pigs they would buy from neighbors later that summer.  Three hens and a rooster had accompanied them on the journey... supplying just enough eggs for an occasional breakfast or baked good.  Sarah tended those hens and rooster each day and by summer's end her flock had grown enough to keep them well supplied in eggs and chicken meat........ 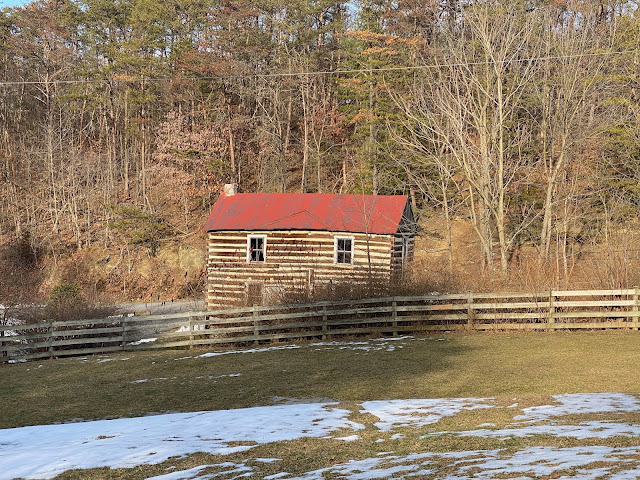 Long before there were sheep and pigs grazing on this parcel of land, 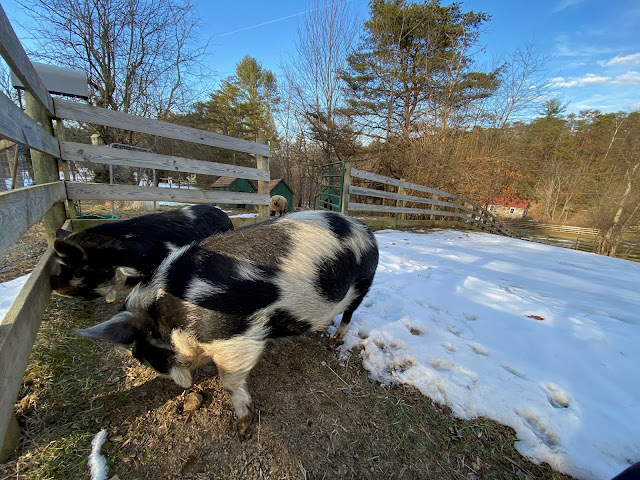 about the time, Old Job, was a mere sapling - 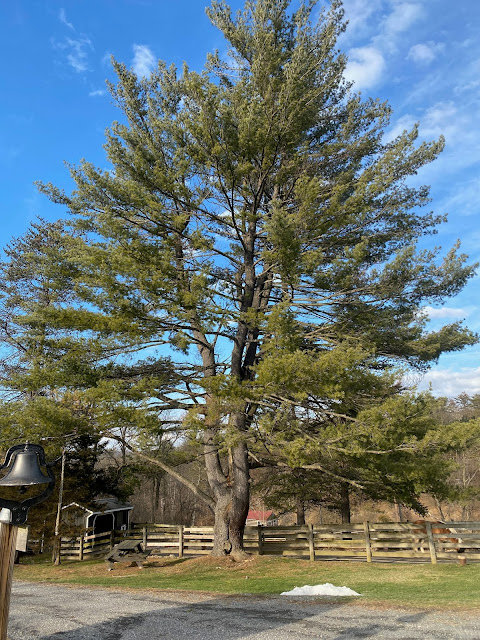 a family arrived here from another life, left behind "back East" to begin a new life here in the wilds of Pennsylvania. 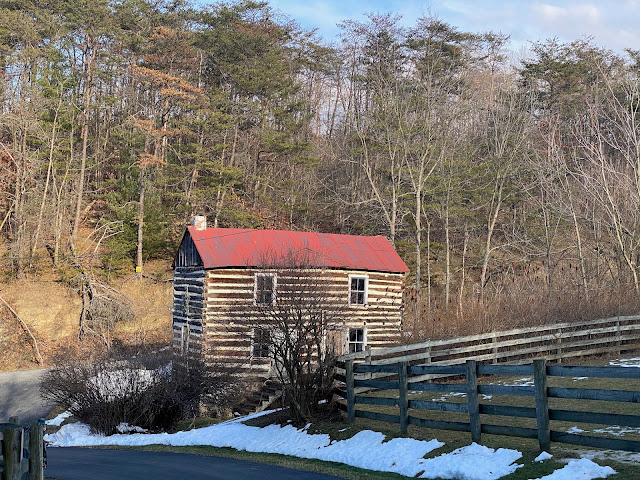 For years I have imagined stories about the people who might have first settled here on this farm... the people who would have first called our old log cabin "home."  Many of you have expressed an interest in the history of this structure.  Over the years historical restoration experts have dated the structure to some time around the mid-1760's.  While not the earliest structure in our area, but is certainly one of the earliest.... and certainly one of the very earliest still standing. 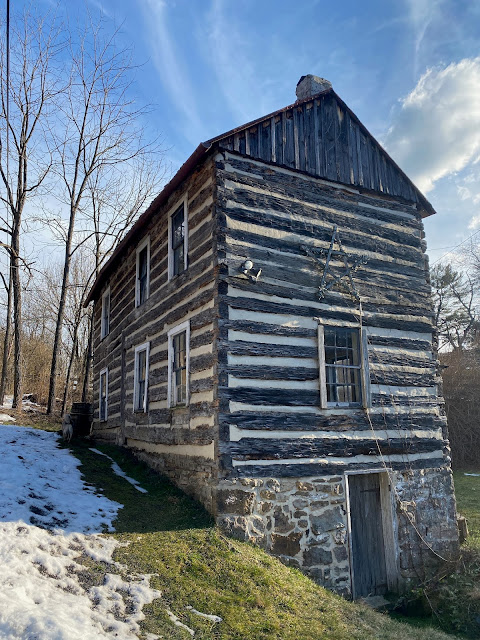 We have done our part in assuring the survival of this wonderful piece of history over the years with several restoration projects aimed at maintaining the structure's integrity.

It is our educated belief that the cabin started out as a simple one-room cabin (the lower right hand portion in the photo below). 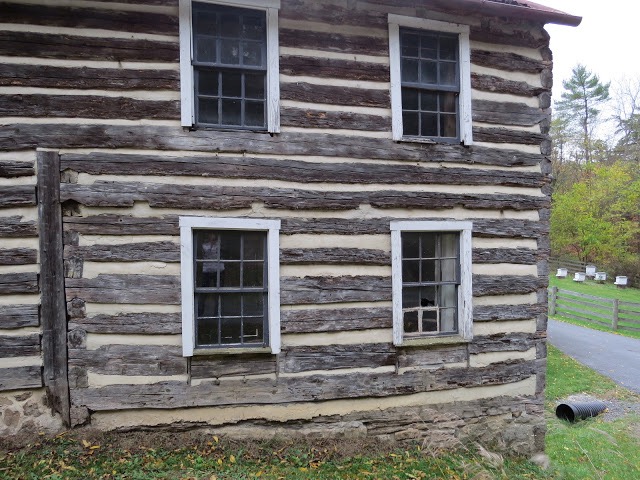 The structure was built on top of a spring, so that the basement is a spring house. At some point, fairly early in its life, a second room was added beside the first (the first, pictured below). 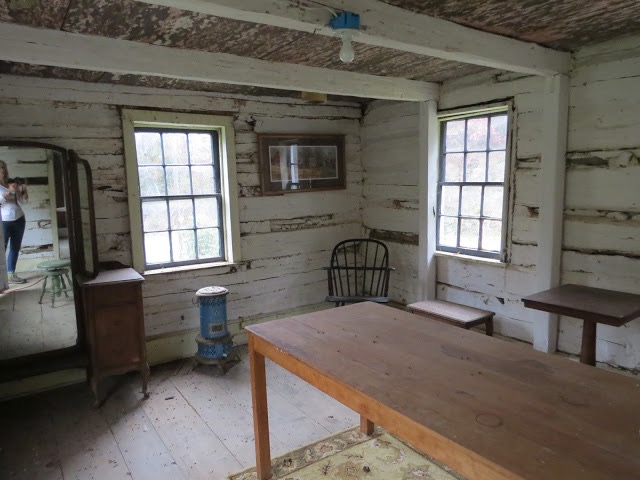 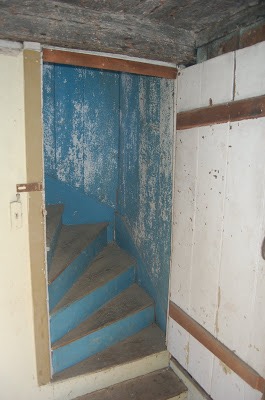 that leads up to two upstairs rooms. 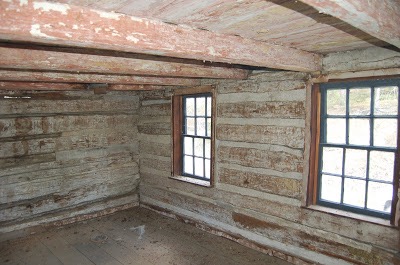 A second stairway leads to a tiny attic space. 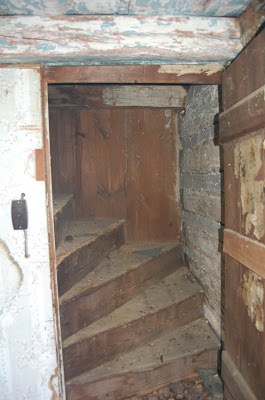 Amazingly, this structure, without running water and only rudimentary electricity (of course, added many years later) was inhabited well into the 1960's.  We had the pleasure, two summers ago, of meeting some members of the last family to live there.  What fascinating stories they told!

Cappy said…
Fascinating! I've always wondered about that cabin. Thanks so much for posting the pics! Is the spring still flowing? Do you ever use the water?
December 31, 2020 at 6:15 AM

Diane said…
If walls could talk...I just love your little story, maybe you should do a little book. Imagine the people built that structure before we were even a country! My husband's ancestors had farms in Buck's county area of Pennsylvania. The men joined the militia and fought England for our freedom. I wonder if the man of your story did the same. It is so great that you have restored the Spring House.
December 31, 2020 at 7:58 AM

daisy g said…
Is the house on the historical registry in your area? How fabulous to be able to see the inside! What a treasure!

Mary, Windy Meadows Farm said…
I would move in in a heart-beat! Thanks for showing us inside and giving us the cabin's history. Love it! Mary
December 31, 2020 at 8:31 AM

Patsy from Illinois said…
This is one of my favorite of your posts. Thank you for bringing us inside this wonderful building.
December 31, 2020 at 9:49 AM

Marcia LaRue said…
Thanks for the little trek back in time ... I am sure this must be a chapter in the book you are writing ... maybe even more then a single chapter!
HAPPY NEW YEAR to all of BHA's readers and to Bev, Hubbs, and all of the fur babies!

Judy said…
What an absolutely wonderful, historical treasure you own!
I need MORE! More pics, more stories. Please!!
Did the furniture in it come with it, or did you furnish it?
Thank you for sharing this with us!
December 31, 2020 at 10:56 AM

littlemancat said…
Enjoyed this so much! And such a good tour - thank you.
Happy New Year to the Bee Haven family, near and far, and to all the fellow readers - which, come to think of it, are part of the Bee Haven family too.
Mary
December 31, 2020 at 11:30 AM

This N That said…
You are the best story teller...Great post and pictures...Happy New Year to the BHA gang! xxoo

Karen said…
How wonderful! I felt like I was right there smelling that last soap:) You could do a book series like Laura Ingalls Wilder . . . . Happiest New Year to you and your family!!
December 31, 2020 at 4:39 PM

Quiltingwiththefarmerswife said…
Thank you for the tour. I've always wanted to take a look inside your older homestead. Were most immigrants short back then? My parents are from England and my grandmother ( born in the 1880's)side of the family were extremely tall. So I guess not everyone was short just a lot thinner than we are now.
Best wishes for a good New Year for you and your hubby and all the critters on the farm. Hope there are no big issues with the fur babies and we all get a vaccine. Bless you. Patty McDonald