Saying Goodbye To Our Barn Manager

May 21, 2020
Every morning, for the past twelve years,
we have been greeted outside the barn by this fellow. 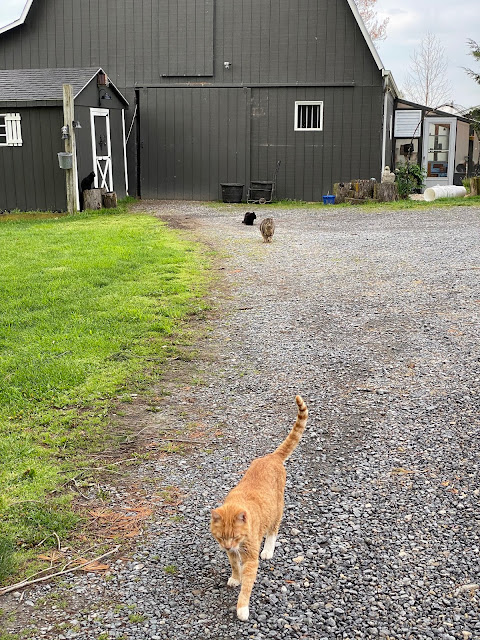 TomTom, our orange Tom cat faithfully served as barn manager...
over-seeing chores and making sure that meals were served on time. 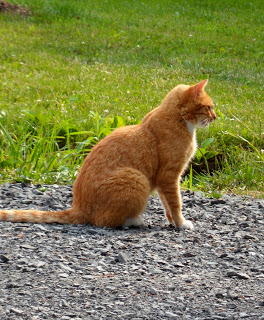 TomTom didn't have the easiest life.
An upper respiratory condition and nasal polyps (for which he had surgery)
were an ongoing issue for him...
for which there was no cure. 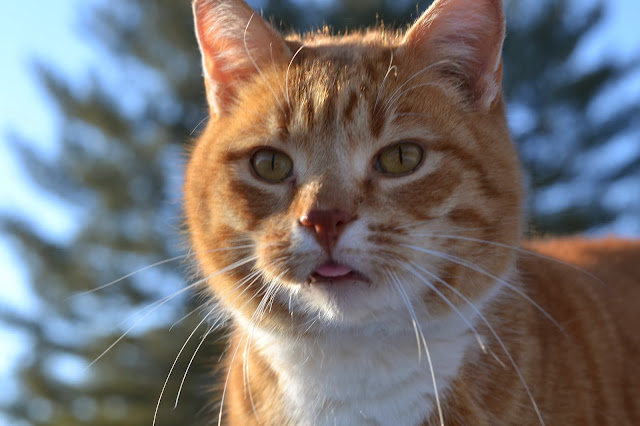 You always knew when TomTom was around...
his noisy mouth-breathing preceding him. 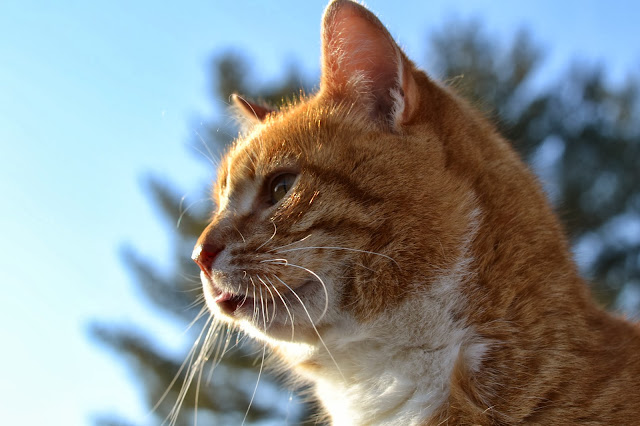 Still, he managed to get along pretty well,
claiming a bed on the workbench under a heat lamp
right next to the food as his territory. 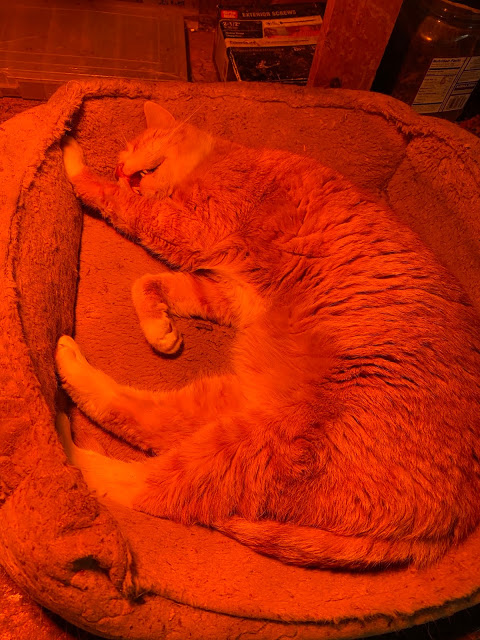 Yesterday morning he refused to eat
(so uncharacteristic for him).
Yesterday afternoon we found him lying on his side in the hayloft of the barn,
and each breath was a struggle.
We texted Dr. Becky and within minutes she was there to
help ease his distress.

His passing was peaceful, with us stroking him
as he drifted away.

Our hearts are heavy...
we will miss this kitty who was a part of our every day.
But, we are thankful that he is not suffering
and that he left us peacefully.

This is the hard part about giving our heart to
our critters.
Eventually we must say goodbye to each and every one of them. 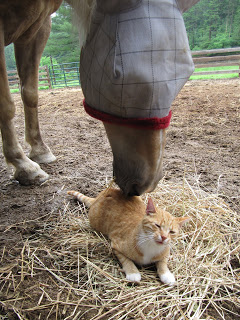 Helping them to pass peacefully without suffering is the
last loving thing that we get to do for them.
And if it's true that all of these souls will join us
when we, ourselves, pass,
then there is much comfort in knowing that we will be greeted
by quite a crowd! 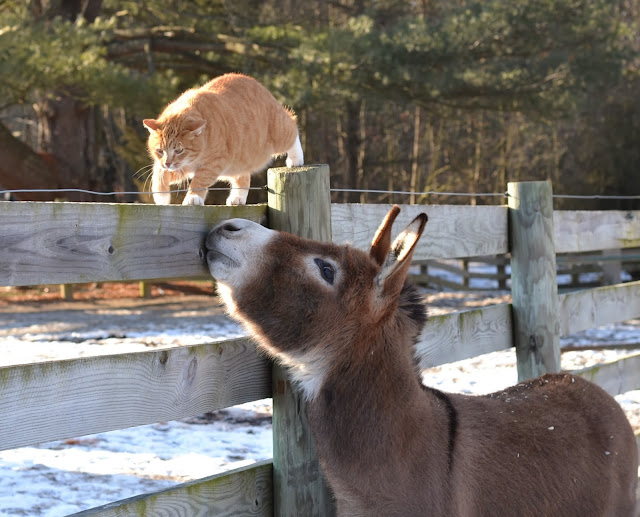 This is the last photo taken of TomTom,
yesterday morning. 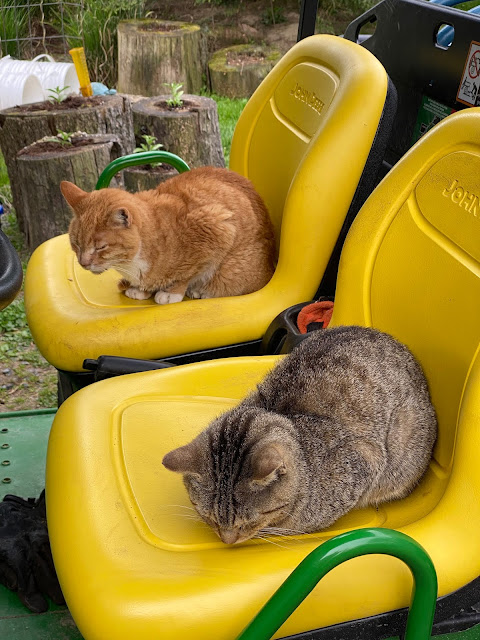 He and Griz were in charge of keeping our seats warm.

Louise Stopford said…
So sorry to hear of the loss of Tom Tom. It really does break your heart when you lose one of your animals. You put is so beautifully about being the kindest thing we can do for our animals when the inevitable is about the happen. The thought of meeting up with them again, one, day, is also so comforting. I lost my little pet hen three weeks ago and it literally broke my heart. There will be quite a crowd waiting for me to. You must take comfort in the knowledge that you give all your creatures the most wonderful happy lives.
May 21, 2020 at 3:25 AM

Anonymous said…
I'm so sorry about Tomtom. Cats do make their way into our hearts. And thank you to Dr. Becky.

Kathy S said…
Very sorry about TomTom. Good barn managers are hard to find. Love the photos of him with the equines.
May 21, 2020 at 7:14 AM

The JR said…
I'm sorry. You helped him not suffer.
He had an amazing life with y'all.

sheryl said…
I'm so very sorry about TomTom. Thank you for sharing and in that I feel the loss too. Blessings and comfort to all that shared his life and mourn his loss. I find comfort and hope that when it's my turn - i will be greeted by many loved ones as well.
May 21, 2020 at 7:55 AM

littlemancat said…
So very sorry to read this sad news. Such a good life he had with you, managing the farm - so poignant seeing him out and about,even if slowly,on his last morning.
Hugs.
Mary
May 21, 2020 at 9:47 AM

Steph said…
He is off to manage a different barn, may he rest in peace knowing he had kept things safe on your farm. Sorry for your loss. It is such a huge responsibility we take when we have pets.
May 21, 2020 at 9:58 AM

Billie said…
Very sorry about TomTom - when you wrote about his noisy breathing I was instantly reminded of our rescue girl River who had the same thing. She too had surgery - though they actually found no polyps and never really could figure out why her breathing was so (what we called) snurgly. She was a sweetheart and died very young from a tick-borne disease. I still miss her - and her breathing which always announced her presence. Big hugs for what is never an easy thing.
May 21, 2020 at 10:50 AM

Marcia LaRue said…
Well, I shed a few tears for sweet TomTom ... he had the sweetest little face with his little pink tongue peeking out! It is so difficult to let them go, but you know you just have to when they let you know it is time! Been there, done that and it never stops hurting the heart!
Thank goodness you have so many other furbabies to help fill in the gap TomTom leaves for now! ❤🐱
May 21, 2020 at 11:38 AM

Karen said…
At one point we had nine dogs - all rescues:) and seven cats. We live in the country and all had such a wonderful lives here. We had a vet who has come out to the house numerous times now, to say goodbye to a treasured soul, and I told her that it never gets easier. She said, 'it's not suppose to' . . .isn't that just SO right? Now my Andy is almost 16 and sleeps on my bed a whole lot - just tired - and I know one of these days . . .*he is the smartest dog I have ever had - a small Lab mix. He was found in a dumpster as a pup (words fail) - screaming his head off. Thank goodness one of my vet's office staff was walking to work and heard him. He has been my sweetheart - well they ALL have been. I am so sorry for your little ginger boy - he had quite the life with you all. A life well lived . .
May 21, 2020 at 1:22 PM

I am so sad to read this post... Thankfully you were able to find him and keep him from suffering. I look for Griz to step up and take the open position!
Hugs from KY. Margy

Quiltingwiththefarmerswife said…
I'm sorry for your loss. It's so hard saying goodbye to our pets. Love the picture of donkey and TomTom. The positive is that Griz came to live with you and seems to be a big sweetheart. Thank you for answering me about the squirrels. I really hate them! They climb the fruit trees as well as eating from the garden. Oh well, we do our best and over plant hopefully leaving enough for everyone including us. Patty McDonald
May 21, 2020 at 4:50 PM

Leslye said…
I am so sorry for your loss.I'm sure he"s with the rest of your crowd and now he can breath.I also have a big crowd waiting for me,it never gets any easier though.
May 21, 2020 at 5:02 PM

1st Man said…
They come into our lives and leave footprints on our hearts.

Sending virtual hugs to you all.

diane in northern wis said…
Oh so sorry to see and hear that your Tom Tom has gone on to a better life. He sure was a sweet and beautiful kitty. It's very hard to get so attached to critters but so easy to do. Thank you for sharing his life with us, Bev. I can't have pets any more, because the last one I had, was so very hard to lose. But thank you for sharing yours!
May 21, 2020 at 11:06 PM

Katmom said…
Oh Bev,, so sorry to hear about TomTom.. but he is on the other side of The Rainbow Bridge... frolicking in the sunshine and no longer having breathing difficulties.
And, Hugz to you and Jack... for always opening your home and hearts to all creatures fur and feathers....loving them until you have to let them cross over....
Hugz
>^..^<
gracie
May 21, 2020 at 11:46 PM 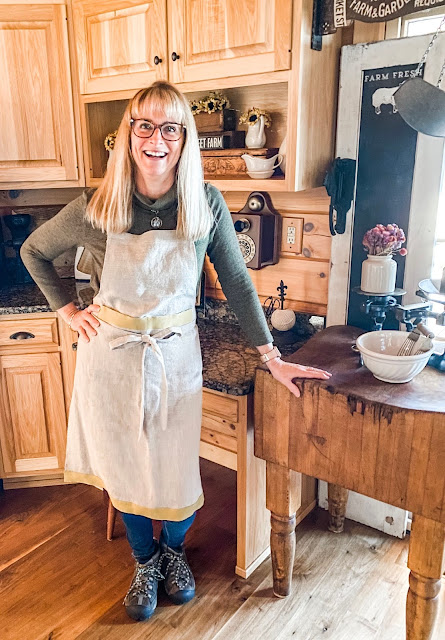