The Best Of Days

The day has finally arrived. 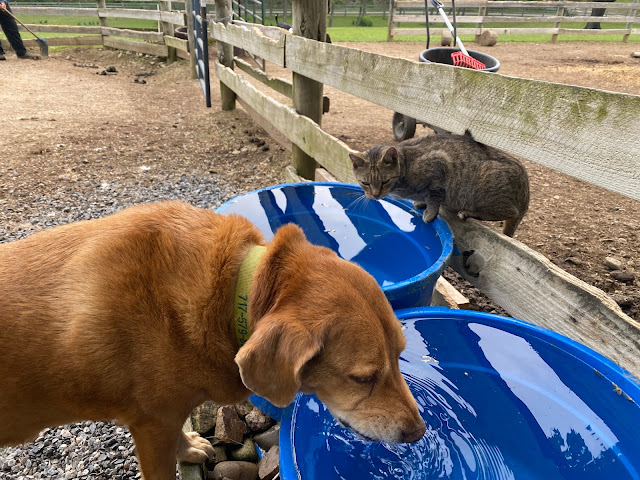 After months of waiting and dreaming and planning, gardening season has officially begun.  The end of last week brought sunshine and warmer temperatures and finally, our cold nights are over. 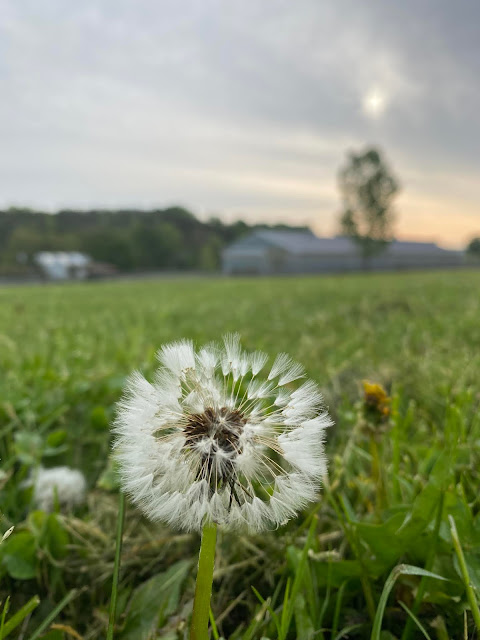 After weeks of watering all of my seedlings and plantlings in the greenhouse, I was finally able to get everything into the ground Friday and Saturday. 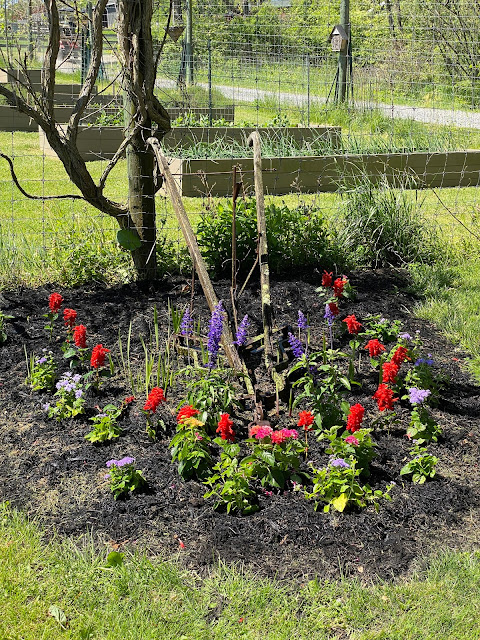 At least eight flats of flowers (both annuals and perennials)  were transplanted into the ground and various containers around the farm. 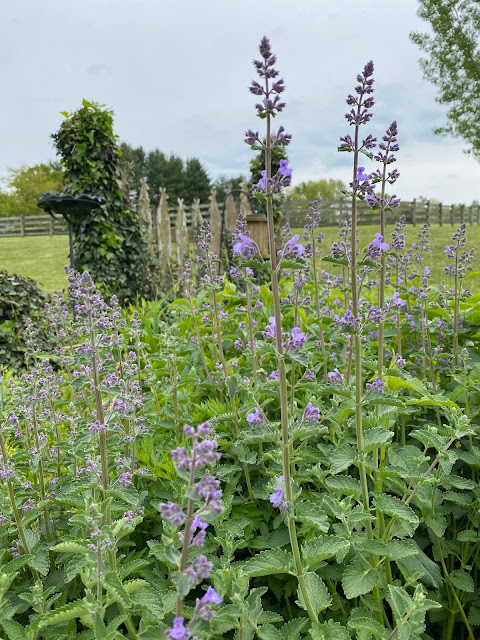 Of course, at this point, most of those flowers are small and spindly.  In a few weeks I will show you the result of all that planting - once the flowers have had a chance to take hold and grow. 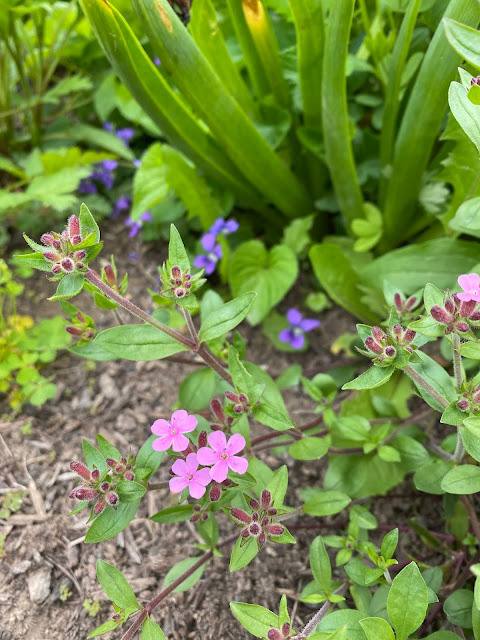 Next, I tackled the vegetable garden.  Here is what is now planted there: 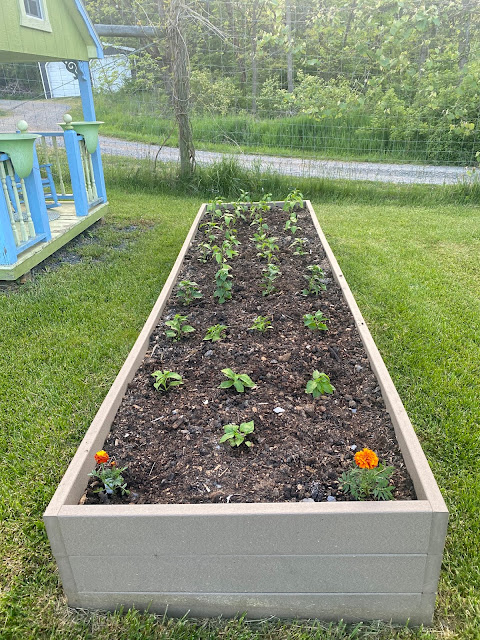 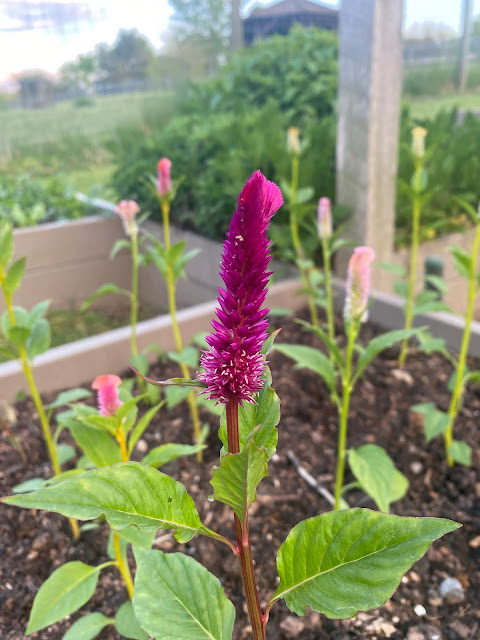 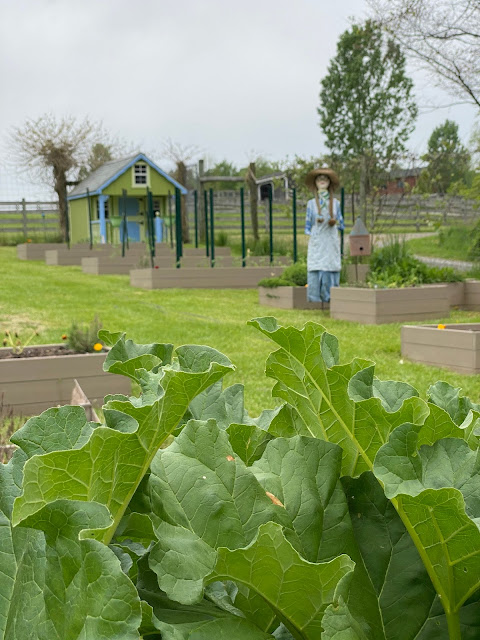 Saturday was a marathon plant-athon, and I am happy to say it is largely finished!  From this point on, all that is left is daily watering and weeding, waiting and watching.  And at the end of all of that.... we have a wonderful smorgasbord of homegrown, organic produce.  I love this time of year... and happily anticipate and wonderful bounty in the months ahead! 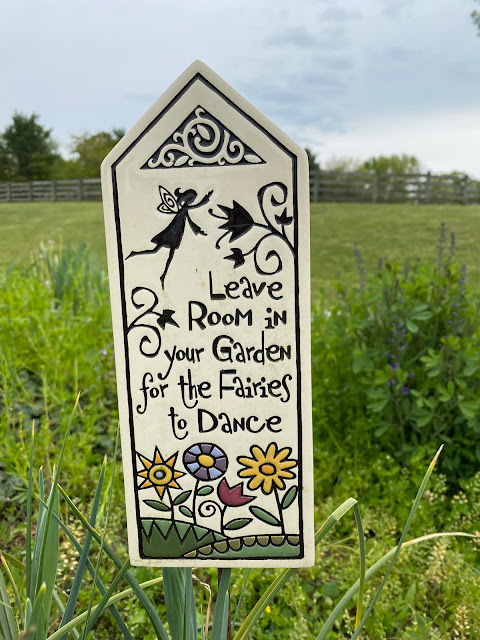 Yes, it is a lot of work, but gardening is my passion.  I am happiest when my fingers are in the dirt and I am surrounded by things that grow (plant and human!) 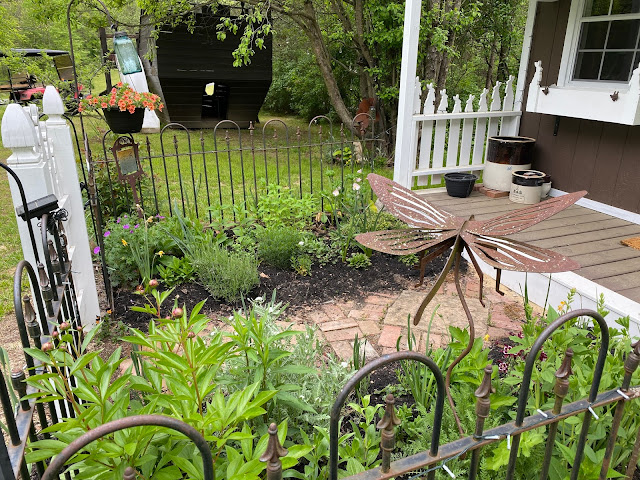 This year I had the idea to plant a row of hollyhocks against our lower pasture fence... on the outside of the small area that we used to keep bees.  Hollyhocks against the backdrop of the old wooden fence would be such a welcoming sight to someone just entering the drive up to the farmhouse.  Sadly, later that night, the rabbits had other ideas and consumed half of the holly hocks.  I will not be defeated, however, and plan to replenish my hollyhocks and spray a predator scent around them to discourage the bunnies (and deer.) 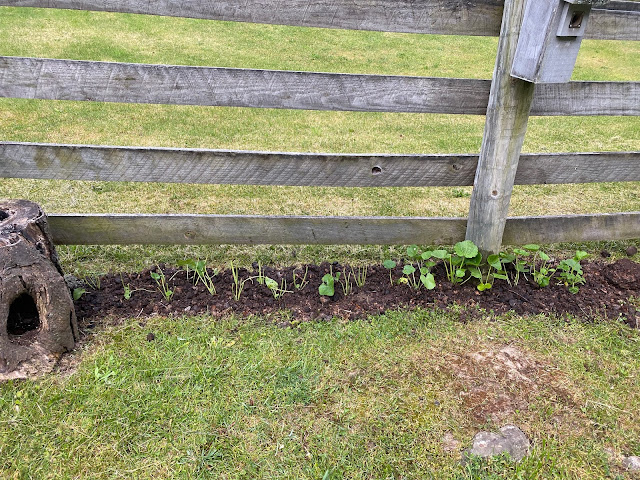 You may have noticed that Minerva Mae Honeycutt has resumed her post in the garden... keeping any marauding birds from making off with our produce.  I have tried, quite unsuccessfully to teach her the finer points of weeding... but to no avail.  Alas, her weeding skills are negligible.  But, she is happy keeping her post... so of course, she can stay.  You may notice that she is sporting the same attire as last year.  She explained that in the time she was away, she gave a lot of thought to the slow fashion movement and has decided to live life as a minimalist.  So, the only clothes she now owns are the ones on her back.  Luckily she gets lots of showers while maintaining her garden vigil! 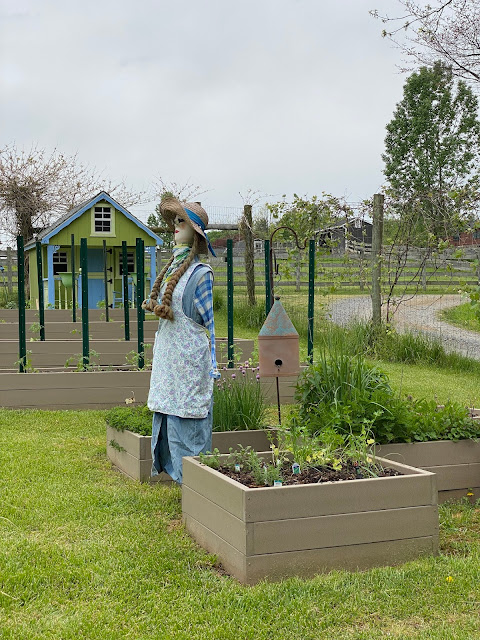 As the season progresses, I will have lots of garden updates - both in produce and flowers! 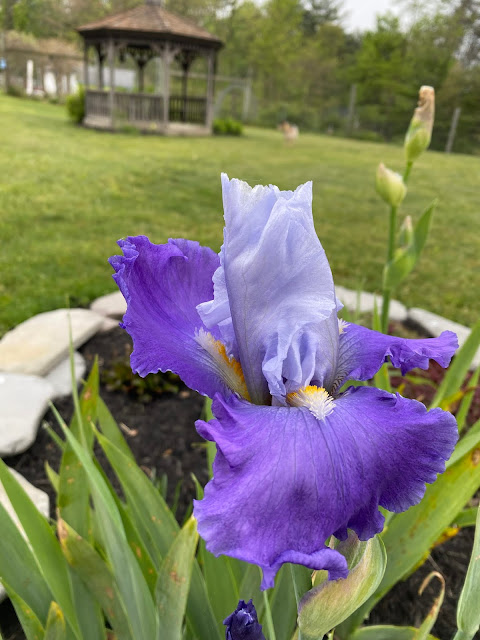 The only other thing that I accomplished in the first part of the weekend was baking bread.  It's been almost a year now since I began baking all of our bread and buying none.  I will never go back... at least as long as I am physically able! 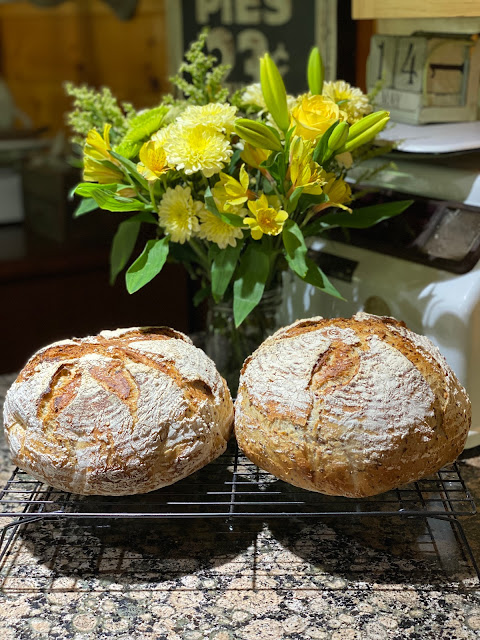 Sunday ended up being a super, special day.  Easton came to the farm for a special "Easton, only" day.  Apparently, asking to go to the farm is Easton's almost-daily mantra.  So, having a day here all to himself was a big treat.  (His sister had a play date with a friend.) 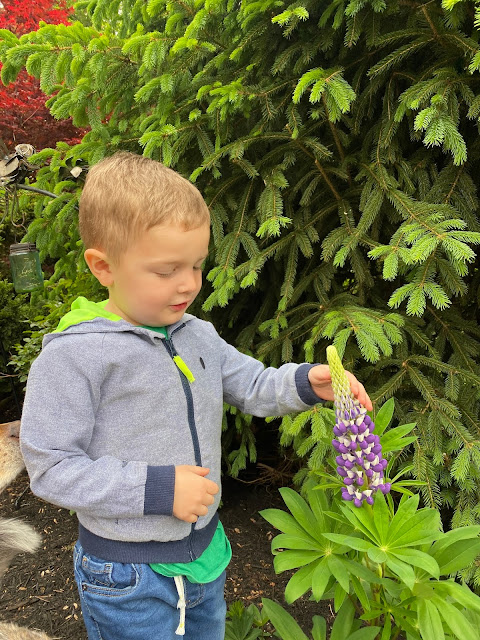 We spent the day doing all of his favorite things.... riding on everything here on the farm that has an engine.... (and there are pretty many of them)... the tractor being his favorite. 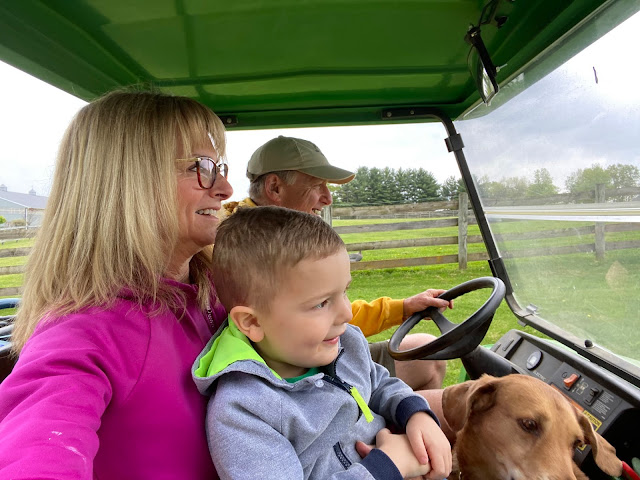 He had a special ride in Muppy's (Jack's grandfatherly name... courtesy of Tyler) go-kart.  He has his own little helmet and Muppy drives very slow... still, so very exciting! 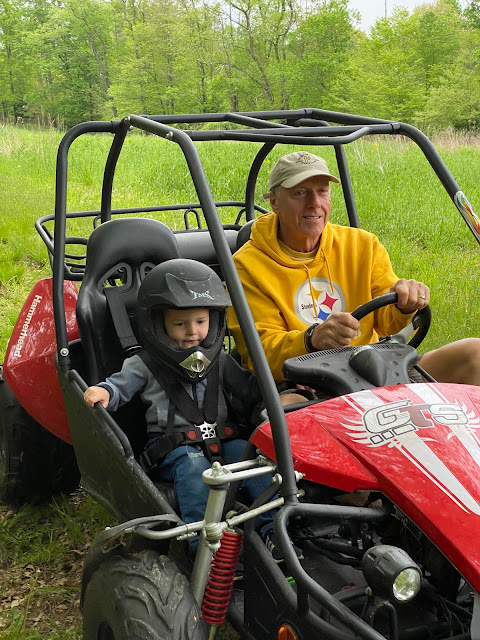 He helped a little in the garden... harvesting radishes, 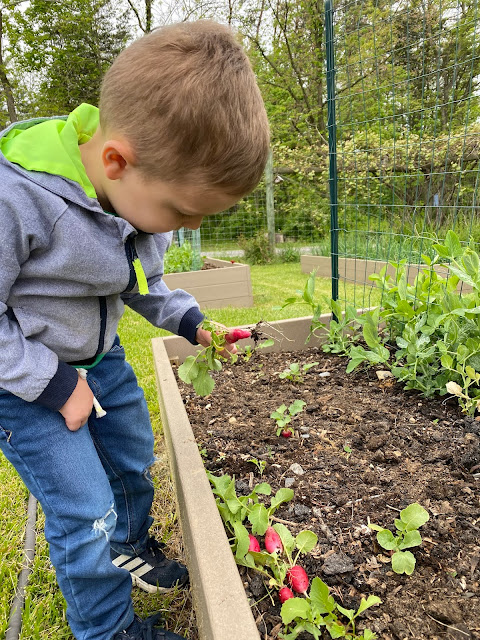 and watering for me. 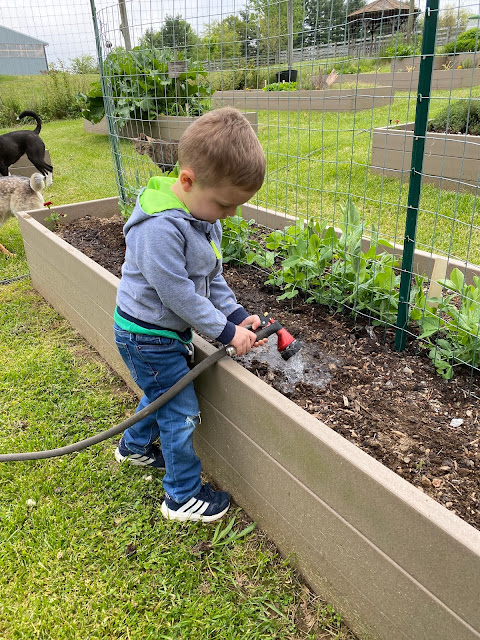 We cleaned the pasture, 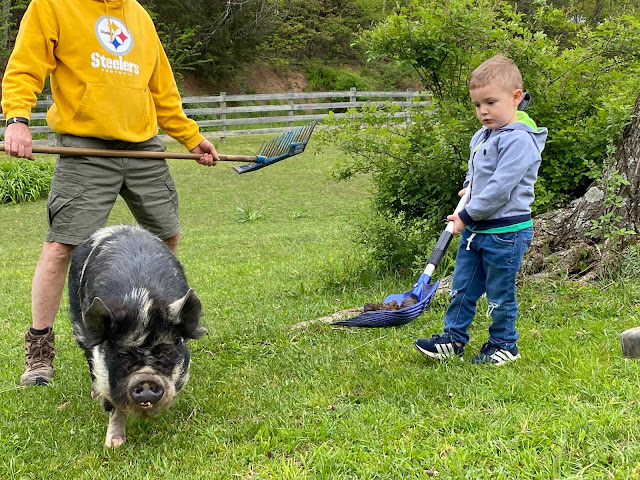 and I couldn't help but notice, both here and all over the farm, tiny Star of Bethlehem flowers are blooming.  I have never seen them before, and now, this year they are all over the place! 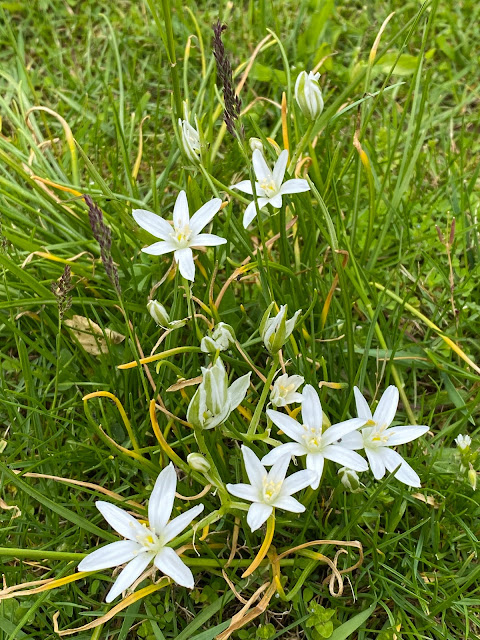 We visited with all the animals. 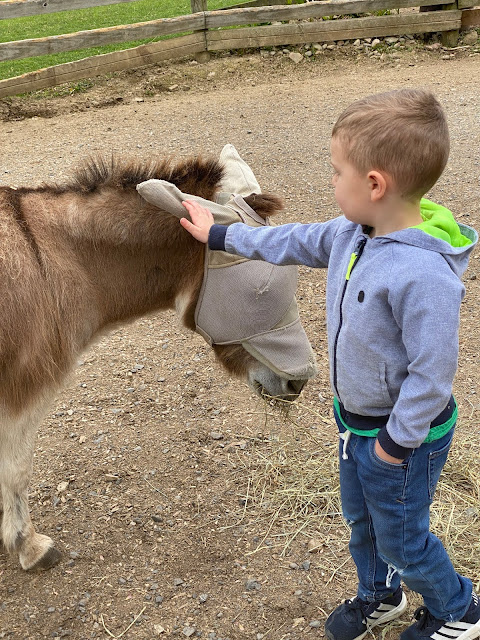 We stopped to see the crazy chicks, who grow bigger by the day. 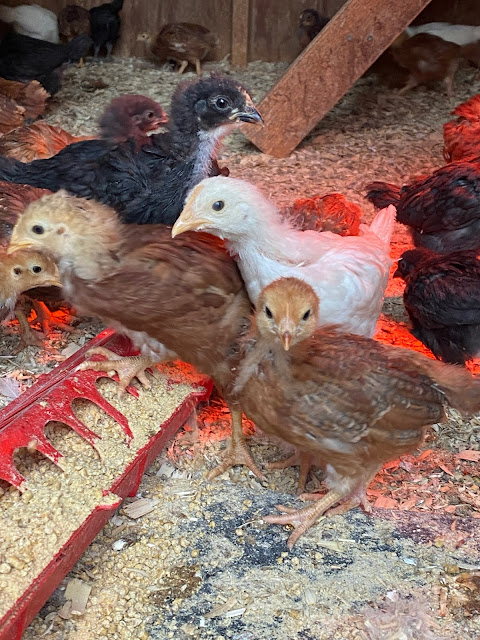 Having a day with a little one is surely a treat for them, but it also forces us to slow down a bit.  This time of year is very busy and it is easy to be swept away by a list of spring chores.  It's a wonderful treat to devote an entire day to nothing but play! 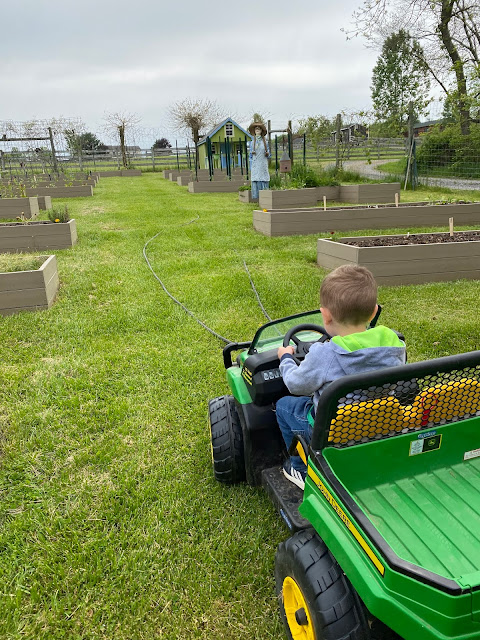 colleen said…
I can remember when Tyler was this age and helping on the farm. What a treat it is to see Easton helping now. Minerva, happy to hear you've jumped on the slow fashion movement bandwagon. How nice to see the Star of Bethlehem. xoxox
May 17, 2021 at 7:00 AM

This N That said…
What are the little pink flowers?? Annuals or perennials?? Sweet..
As I said...you'll have it all done in record time!! Wow..
Minerva has a lot to keep her eyes on..
Easton was probably in heaven..having you and the farm all to himself..That's special.
Enjoy your week!! Hugs

diane in northern wis said…
So nice that you got so much accomplished over the weekend. everything looks healthy and happy there! How fun to have Easton come out and enjoy the day with you. Can't wait to see all your flowers popping up! Hope the morning glories and holly hocks do well for you this year!
May 17, 2021 at 11:43 PM

EDGAR C/ BEARD said…
SO VERY ENJOYABLE...IT IS AMAZING WHAT YOU AND HUBBS DO...WONDERFUL...TYLER IS A DOLL...THE FARM AND FLOWERS ARE SO BEAUTIFUL....I SURE ENJOY THESE SO MUCH..WE HAVE NOT HAD AN INTERNET OFF AND ON...TNAK YOU FOR THE WONDERFUL PICTURES ADN BRILLANT MESSAGES....HAVE A SUPER DAY ! 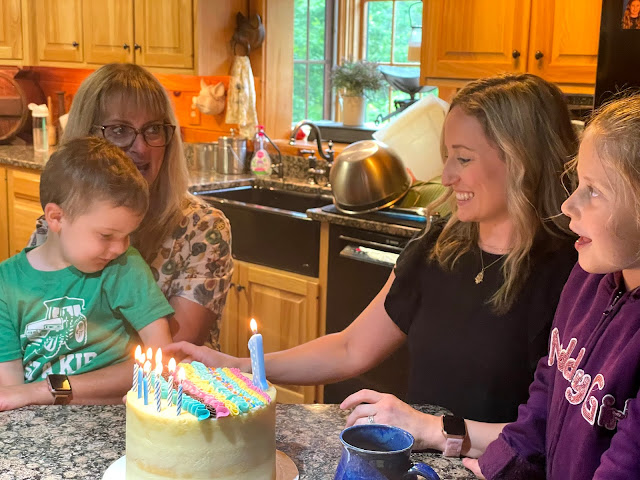 I know... it sounds like the beginning of an epic novel, doesn't it?  Well, after not having family together at one time since Christmas of 2019, we had a family party last Friday.  Amanda was here, visiting from Colorado.  Her twin, Ryan and his wife, Bekah, and baby, Wren drove in from North Carolina.  All of the local kids and grandkids came to the farm as well.  We had a wonderful gathering of four generations.  Good food, laughter, family communion... all things that had been sorely missed for so long! Cousins met for the first time. It was a special day filled by my most special souls on all this earth. Saturday, we rose early, and headed to Pittsburgh for a family wedding.  We just happened to find an Amish bakery along the way which made Amanda's day.  She hasn't been able to find "good" donuts since moving from Pennsylvania!   Amanda and Ryan and his family also made the trip to Pittsburgh, as the wedding was Jack's nephew and the twins' cousin.