Birds, Mammals, and Reptiles, Oh My!

Yesterday morning, under sunny, blue skies, we took off for the feed store to pick up the chicks that they were holding for us.  The countryside is ablaze with color right now... the Eastern redbud trees making the hillsides pop. 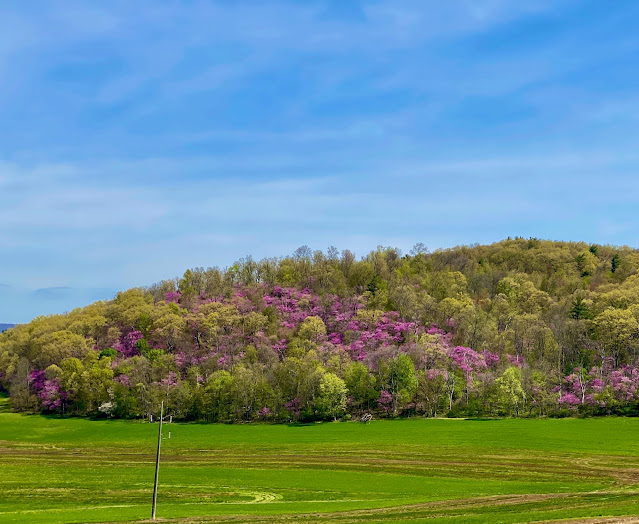 The ride to the feed store was a a treat in itself.  Although the destination was important, the journey was indeed a treat!

The previous day, over the phone, the feed store told us that they had about 19 Rhode Island Reds... 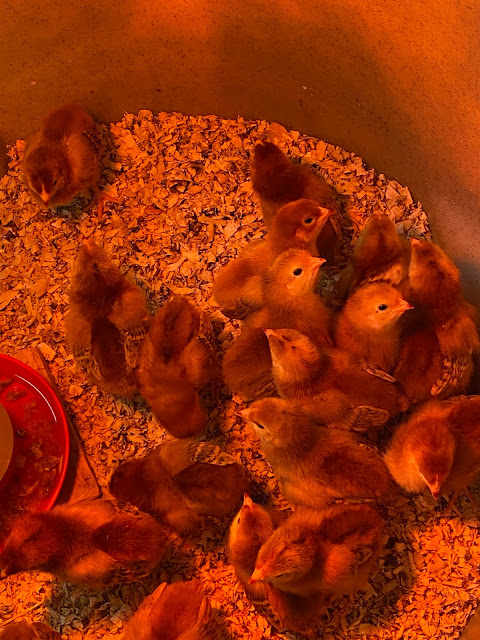 and 17 mixed Black sex link and white Leghorn chicks left, but that the reds were reserved for someone. 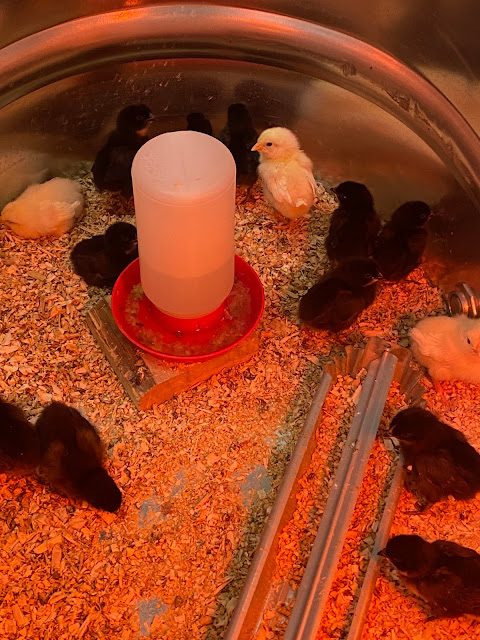 When we arrived at the feed store, we were told that if we wanted to, we could take all of the chicks, because no one had ever picked up the reds. 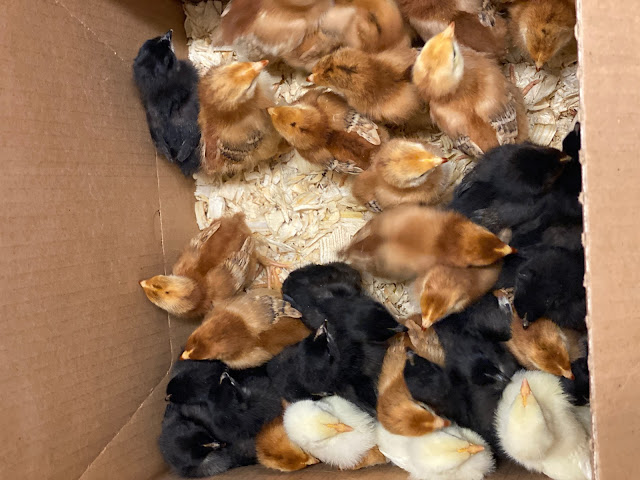 So, naturally (because, as Hubbs says "we always have a tendency to over-do things"),  - we brought all 35 chicks home to the farm.  We have plenty of room in our henhouses, so... why not?  Our current flock is somewhat geriatric and no longer laying reliably. 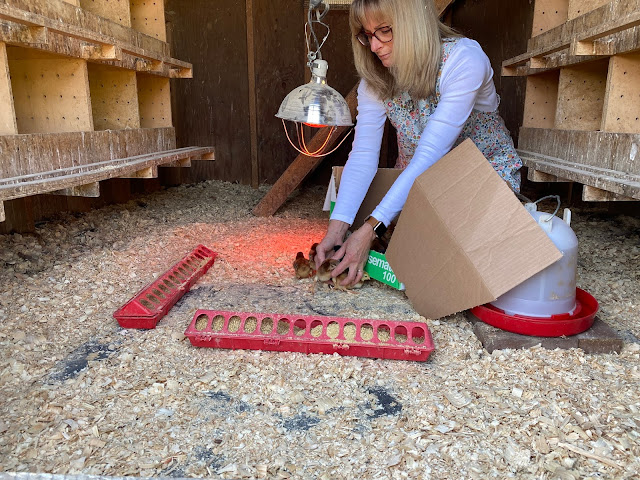 It looks as though we are starting over. 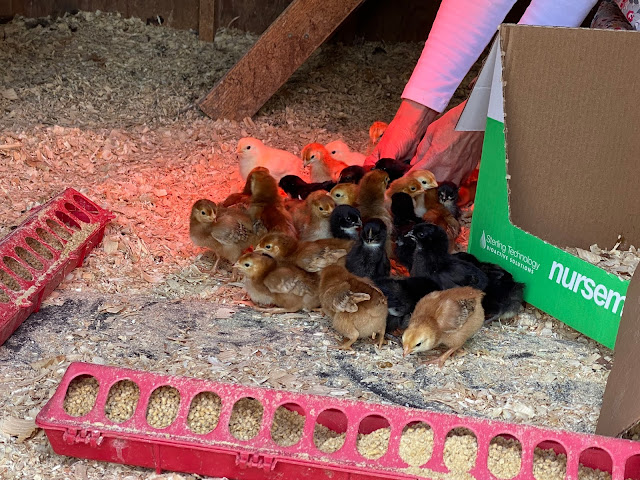 In a few months we should have plenty of eggs!  (Too many, actually.... but we love to share them!) We got them settled into their new house with a heat lamp for warmth, and plenty of food and water. 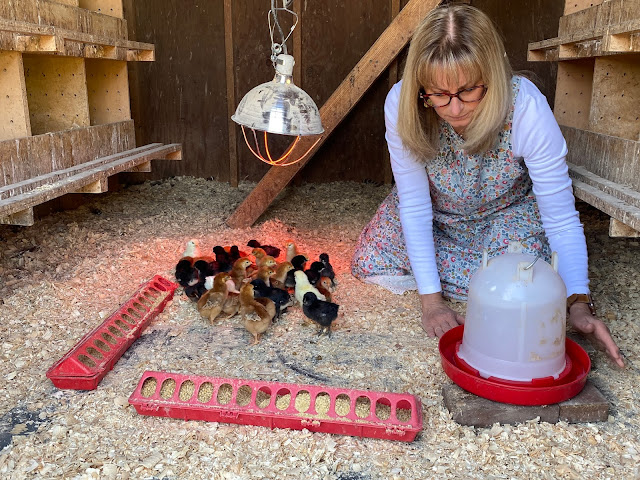 I'll check on them several times a day.  What fun it will be to watch them grow!  With 35 new hens, it will be impossible to name them all.  We might have to go with group names... such as, "the Lucilles, the Blanches, and the Jetts."

Once home, I stopped by the mailbox and was greeted by a visitor... 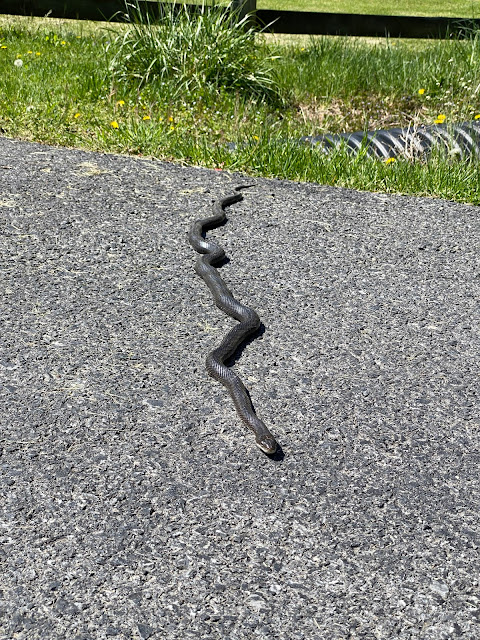 To many, a visitor like this might be unwelcome, but because snakes help with rodent control, I tolerate them.  Actually, they intrigue me.  This one is a black rat snake (identified by his lighter underbelly). 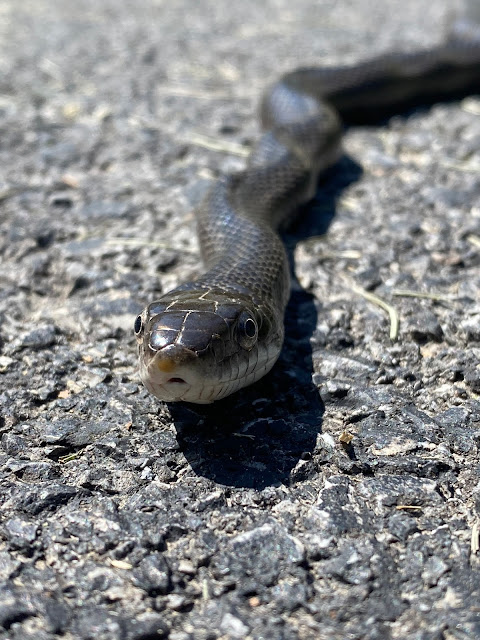 We had a short conversation and he told me he was just out enjoying the warm sunshine and the heat of the driveway. 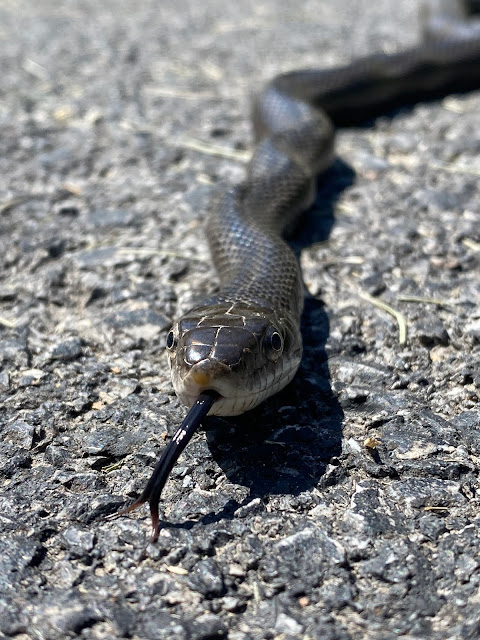 Back in the barn, the Beatrixes are spending their days in the rafters... watching the barn swallows as they enter and exit the barn.  The swallows are smart. 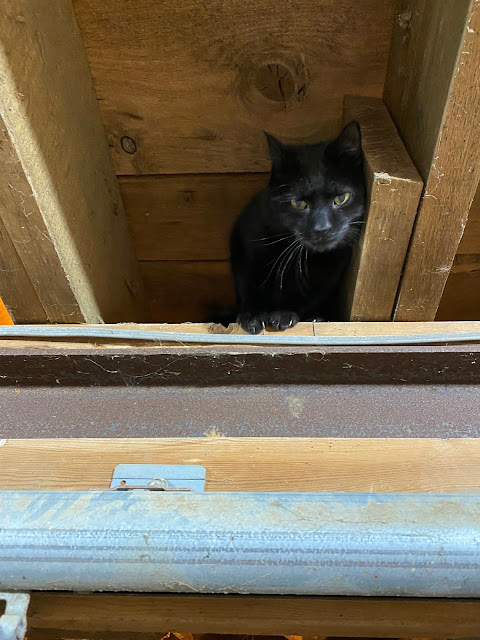 They have built their net in the middle of the stall rafters... far away from the grabbing claws of two black kitties. 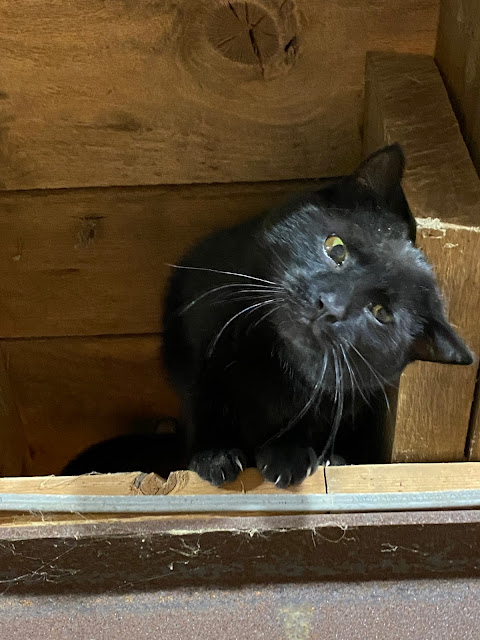 ladybug loves lilacs said…
Oh so many new babies. We no longer have our flock. Something that we never could identify was killing them off. We still do not know how either. When we were down to just a few I couldn't bare to lose them so we gave them to our neighbor. Since we will be moving we won't start a new flock yet.
We have black rat snakes here too. I am not happy about any kind of snake and they were famous for stealing eggs when we had the hens. They and mice I never could abide in the house. We had 8 or 10 of the the rat snakes living in the basement when we moved in. The place was empty a long time prior. Of course once we moved them on we had rodent trouble. We did find a snake skin in the basement this year. The grandsons thought that was cool.
Look forward to seeing your little peeps grow. I always loved watching ours.
April 28, 2021 at 6:33 AM

Grandma Zee said…
How fun, lots of cute chicks. I only needed 3 new hens this year, so instead of getting chicks to go with my 3/ 1 year old hens; I bought 3 Red Star Hens, about 5 months old and just started laying. Oh my, they are just the best layers, along with my 2 leghorns. The redbuds are gorgeous, hard to grow hear in our high desert. Snakes, now I have my son in law move them to a big field away from the homes, not my favorite critter. We got some good rain the last two days, and a little more snow in the mnts. but still in a bad drought, may be water rationing, so all my garden and flowers will be mulched and more mulch. Love your blog, keep it coming.
April 28, 2021 at 8:12 AM

jaz@octoberfarm said…
i took my daughter to tractor supply last week to buy a tool and we almost came home with peeps and ducks. omg, they were so cute. how i wish!
April 28, 2021 at 9:50 AM

Anonymous said…
Beautiful picture of the redbuds! Like all the other pictures too - snake, Beatrixes, baby chicks
April 28, 2021 at 10:12 AM

This N That said…
Congratulations on your new charges..They will be happy in their new home..Glad that the Barn Swallows are safe from the kitties..Snakes...yuk! Enjoy this last (for now) day of 80's..We could use some rain..Hugs..
April 28, 2021 at 12:15 PM

EDGAR C. BEARD said…
A JOY AS ALWAYS...THANKK YOU...AND GOOD LUCK W/THE BABY CHICKS...SEEMS LIKE 2/3/4 ALWAYS SEEM TO DIE...HOPE THEY DO NOT GET BASD GREMS AND SEVERAL DO NOT MAKE IT...I THINK CLEANESS IS THE KEY AND I CAN TELL FROM ALL YOU FOLKS DO..YOU GO TO GREDAT LENGHTS TO MAKE SURE YOUR ANIMALS AND FOULS ARE WELL TAKEN CARE OF..I SURE APPRECIATE THAT...THANK YOU AGAIN FOR THE ENJOYMENT OF YOUR PICTURES AND YOUR GREAT COMMENTS !!!
April 28, 2021 at 9:38 PM

diane in northern wis said…
Love all your new little chicks....ha....I knew when the opportunity arose, you would take them all home. Hope they all thrive! Such beauty in the trees on the hills...so colorful! Well, I must say, I almost have a heart attack whenever I see a snake and that is a big snake! I'm glad they go after rodents....hope they don't go after chicks!
April 28, 2021 at 10:43 PM

Eva Wilson said…
Your information is very detailed and useful to me, thank you for sharing.