Every time we take a trip over to our Hundred Acre Woods, we see many deer.  Every time, I take my camera, and every time, the deer are way too fast for me to get a photo focussed and snapped.  Whitetail deer are lovely, lithe creatures.  They are tall, but oh, so graceful.  By the time we spot them in the woods, they have turned to run and all we can see is their bright white tail sticking up like a plume, dancing across the bramble as they run and jump over logs.  They are almost silent as they nimbly escape through the woods. 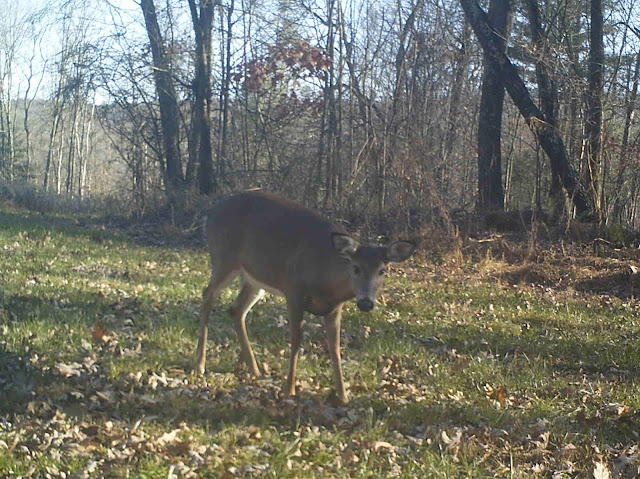 I am sure that if I just parked myself in the woods, quietly, for an entire day with camera in hand, I would have a much better chance of snapping a photo.  However, a trail camera is a much more efficient tool and the price is definitely worth a day of sitting still, waiting. 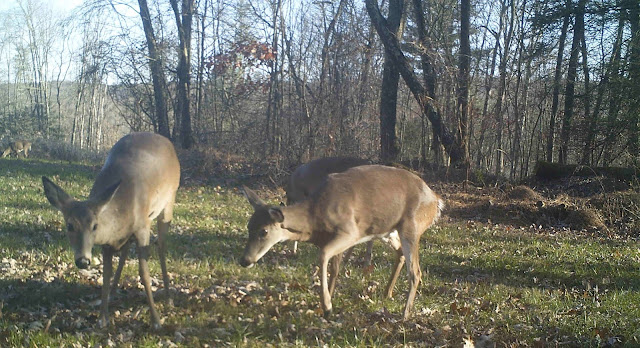 This past Saturday, we placed a trail camera on one of the upright posts of our platform tent in the woods. The tent sits in a clearing, at the edge of our Field of Dreams,  that is frequented by our deer population.  In the summertime, the naturalized patches of thick grass, thistle, honeysuckle, and milkweed are the perfect bedding areas for the deer population... offering a safe and secluded area in which to raise their young.  We often see fawns playing in the mowed pathways that criss-cross that field.  This area is a popular grazing area. 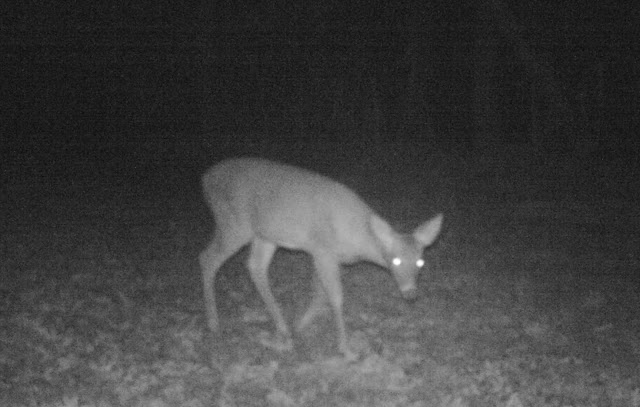 In three days time we were rewarded with 1200 photos of one, two, three deer at a time.  Most of the photos were snapped in the twilight and nighttime hours, although a few brave souls walked through the area in the morning. 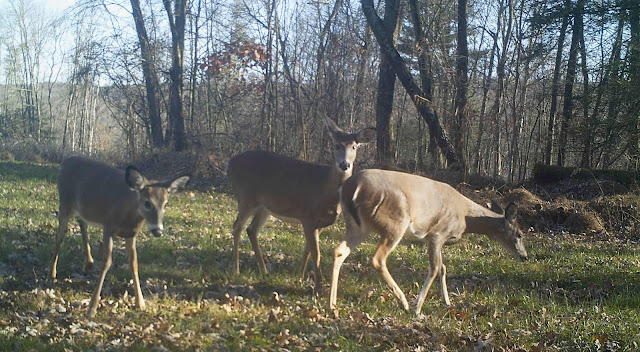 It's hunting season, and although we do not allow hunting in our woods, the deer are rather spooked at this time of year and prefer to remain hidden during the daylight hours. 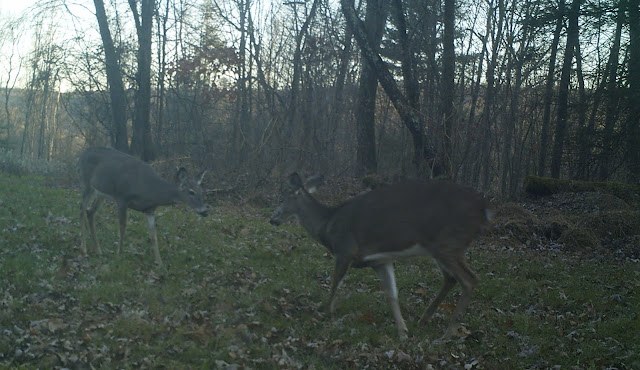 The summer's fawns have grown considerably, but still remain with their mothers. 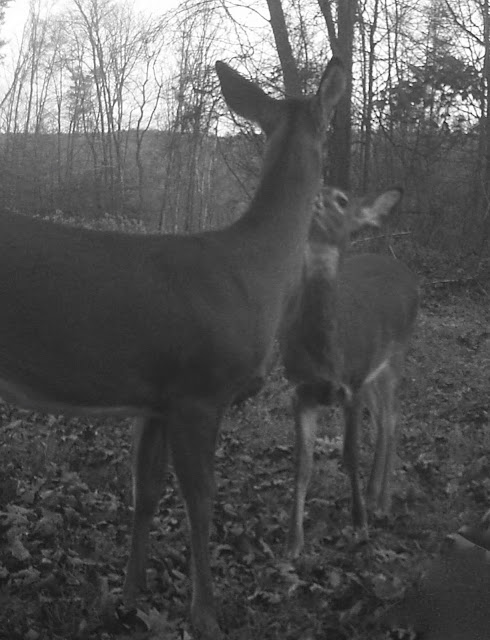 Surprisingly, none of the photos showed any bucks.  However, we have seen antlers on several of the deer that we have encountered on our trips to the woods.
Pennyslyvania's deer have been ravaged by a neurologic condition called chronic wasting disease -
and though we have heard that there has been some cases within our county, we have not personally seen evidence of it here in our woods.
Our deer are lucky in that they have lots of habitat still remaining in our area.  Food is plentiful with acorns and beechnuts from the surrounding woodlands.   This is not the case in urban and suburban areas, where the deer have had to learn to live amongst humans.
Sharing our woods with these beautiful creatures is yet another of the many things that I love about life in the country.

jaz@octoberfarm said…
meanwhile, we have deer casually walking down our streets up here as if they are people.
November 18, 2020 at 11:20 AM

Anonymous said…
I thought the Eastern US was having issues with Deer overpopulation and Lime disease. I am surprised that you are feeding them and providing a safe haven. We had issues in upstate NY with Deer completely decimating the forest from overpopulation and not enough hunters to replace the natural predators.
November 18, 2020 at 11:32 AM

This N That said…
We rarely see a Buck here..I don't know where they hide..Security saw a big one at night about a month ago..I have probably only seen one 5 times in 8 years.. Judging by the amount of fun that we have each year, they are around! Have a happy day. Hugs
November 18, 2020 at 12:27 PM

Our little equine family is a tight unit. They've all been together most of their lives, and if I have my way... will live out the rest of their lives in each others' company. It makes my heart happy. We've developed a trust over the years... the equines and I. Whereas the donkeys seek my company and enjoy my attention,  following me around like shadows... the horses take note at my presence and continue their business. I'm sure, most days, they'd rather I didn't fuss with them. But when I ask them to stand still for me, they oblige. I am, after all, the "bringer of food"! Occasionally, curiosity gets the better of them, and they must see what I am doing...  but, most times they could care less. Still, they have a gentle way around me... and a gentle way around my little people as well. I trust this herd and they trust me. One of my favorite moments here on the f