June 24, 2020
This week's blog post comments generated an excellent question
about how horses sleep.
The question was : if the horses are out in the pasture all night long,
how do they get their sleep? 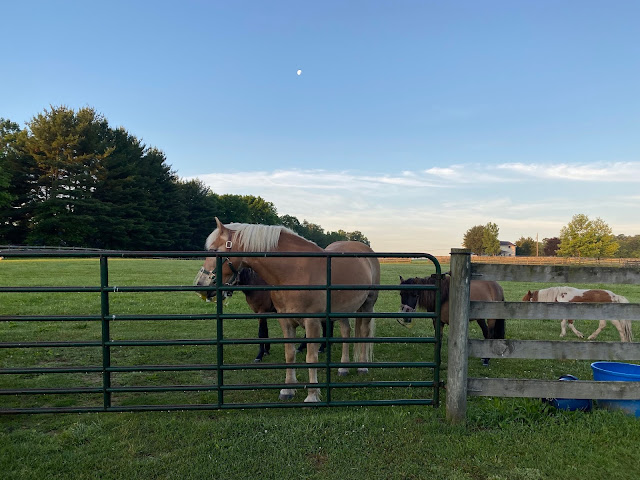 When it comes to animals and their sleeping habits,
most of us think in terms of our dogs and cats...
who tend to sleep more than they are awake. 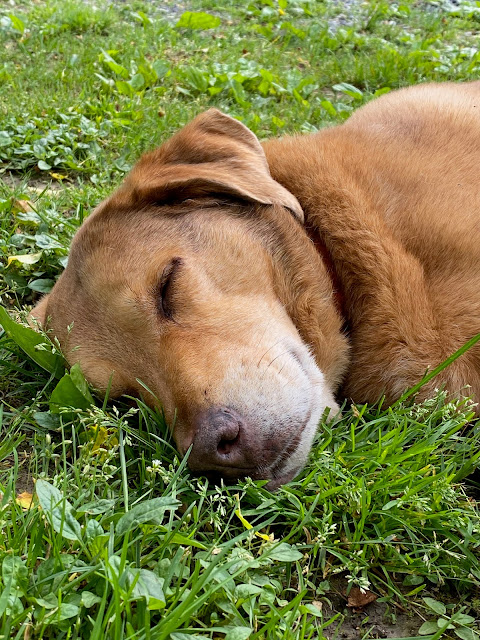 Right?
Dogs and cats... at least mine... sleep all night long,
and take lots of naps during the day as well. 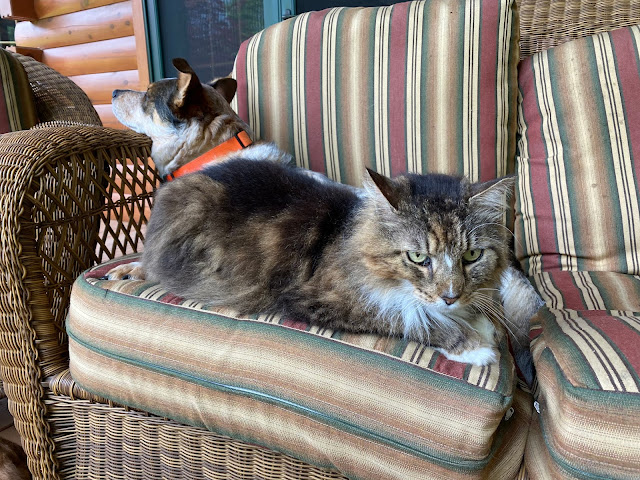 So it is with predators. 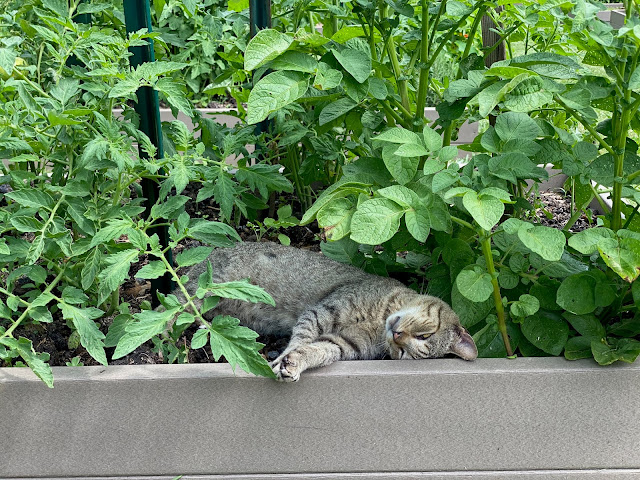 And, as dogs and cats are considered predators,
their sleep habits are right in line with their kind. 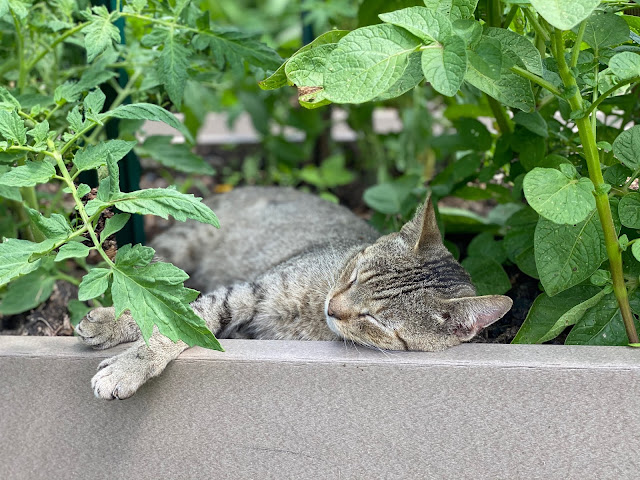 Horses, on the other hand (prey... not predators), grazers,
sleep only about 3 hours, on average, each 24 hour period. 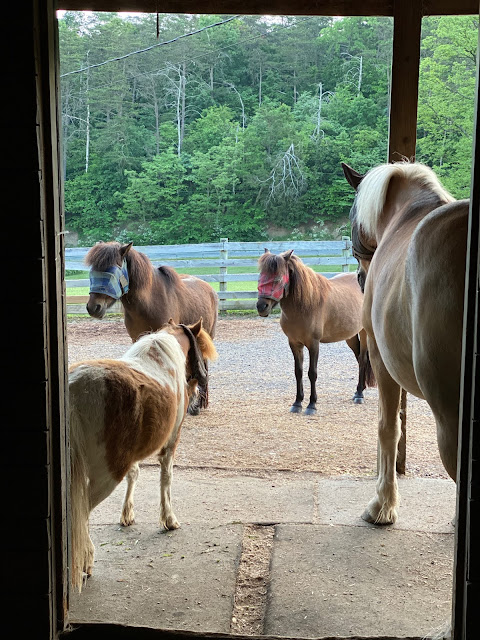 They have the innate ability to sleep standing up.
They lock their legs, close their eyes, and grab a nap in this manner
when there is nothing better to do. 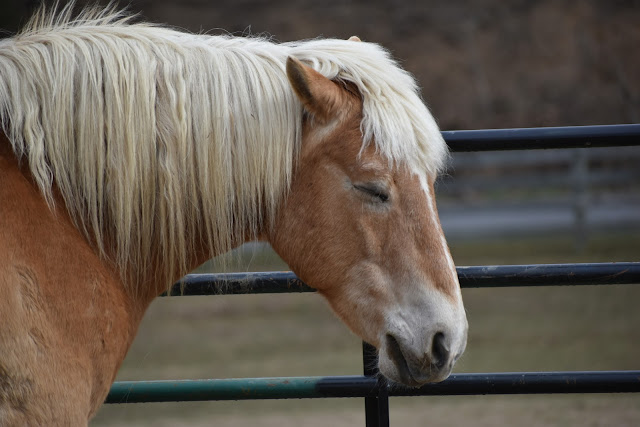 At some point, during their day/night, they also lay down...
stretched out on their side and sleep for a very short period of time. 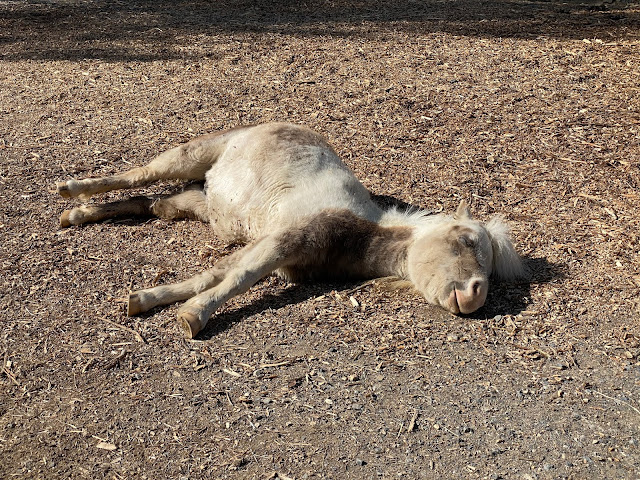 Generally they will do this only when they feel safe. 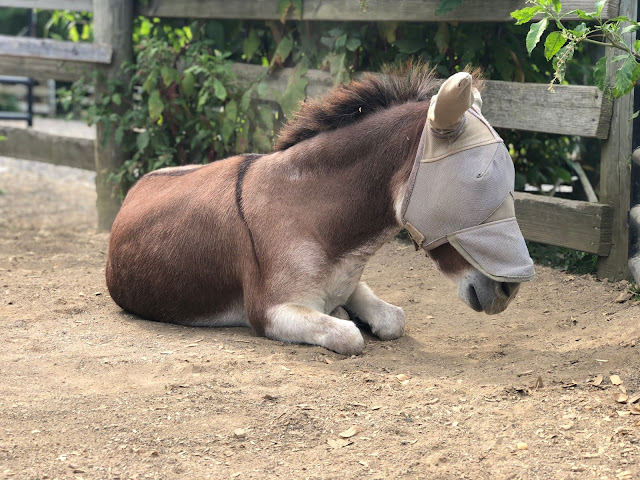 If the herd sleeps at the same time,
at least one of the herd will remain awake to stand guard over the others. 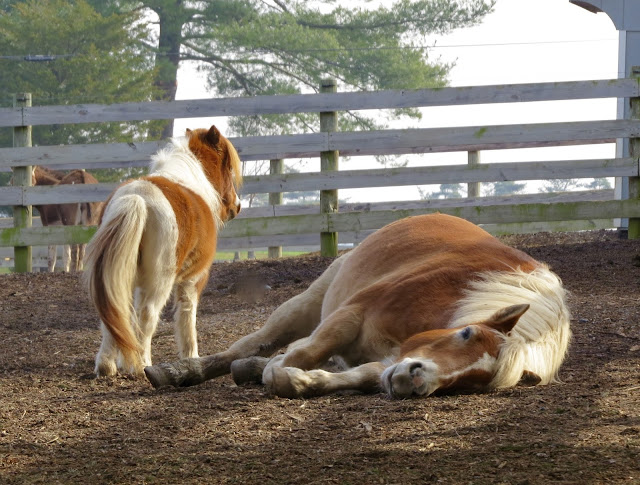 It is only during this period of sleeping on the ground that
a horse enters REM sleep.
Though the amount of REM sleep needed is small (30 to 40 minutes),
it is very important. 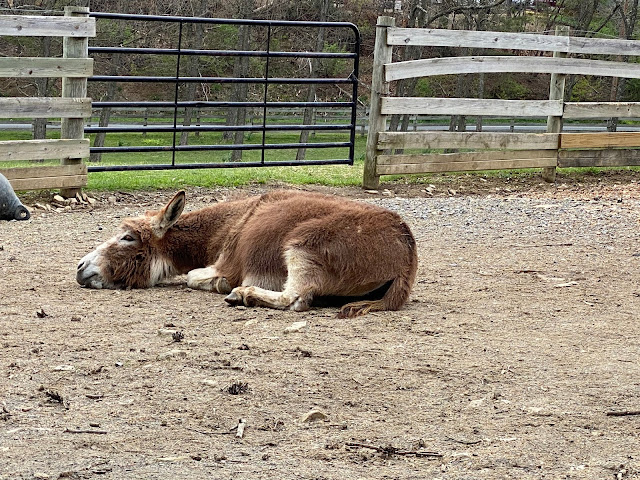 I have noticed that my herd usually catches their REM sleep
some time during the mid morning to mid afternoon time.
On hot afternoons, they generally stand in the barn stalls with the fan
blowing on them, napping. 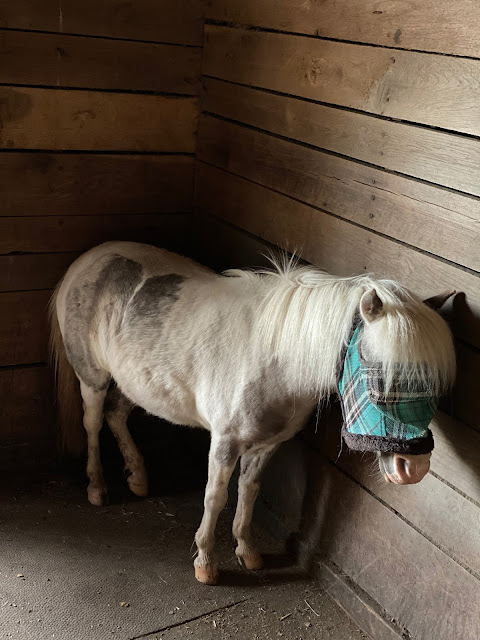 As for their time out in the pasture... I have never seen them sleeping in the pasture,
as they are always way too busy stuffing their faces.
However, if one of them felt the need, they would certainly do so.
And since I have never watched them graze through the night,
I have no idea if they spend any part of the night asleep.
I assume not... but, again, just an assumption base on how tired they
seem in the morning. 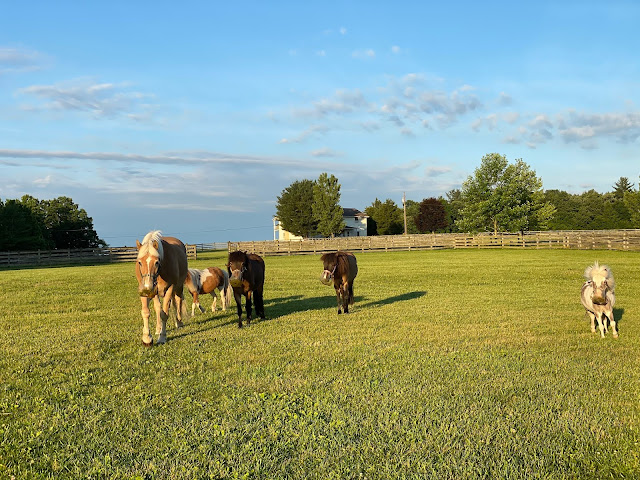 The last two nights, I have kept our herd in and fed them hay for the night. 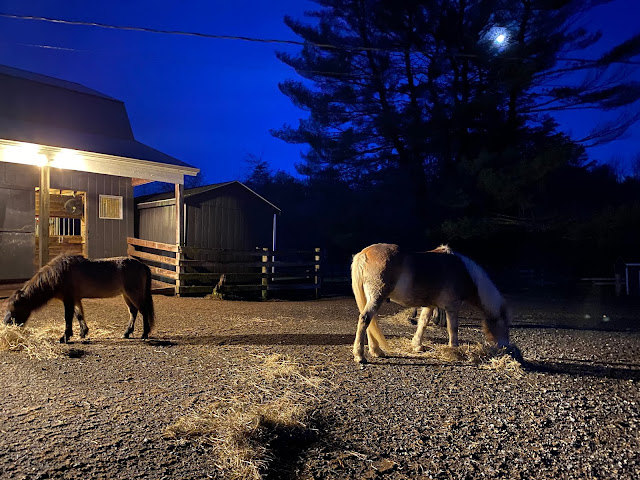 We've had a lot of storms passing through,
and although they would be fine out in a storm,
the "momma" in me doesn't want my babies out in a storm.
When they haven't been out for the night,
they go out in the front pastures without grazing muzzles
early in the morning for a few hours. 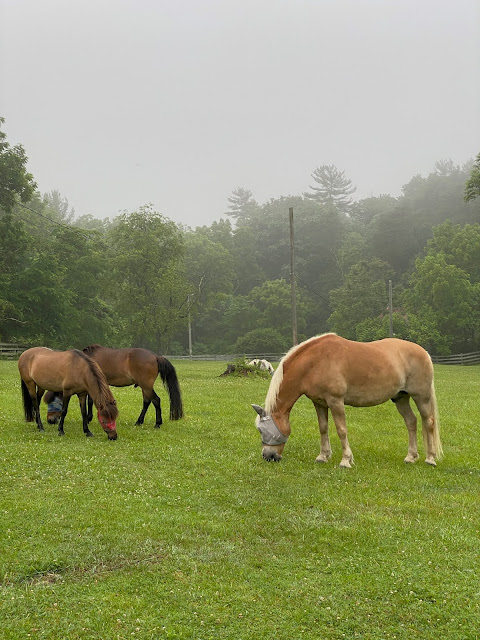 You may wonder why I don't allow my horses out in the pasture
all of the time.
If my horses were thoroughbreds or another type of energetic horse,
they would be able to tolerate, and would actually need, the extra nutrition.
However, Haflingers (Moonbeam), ponies (Donnie and Scarlet),
miniature horses (Ollie and Red) , and miniature donkeys (Chloe and Daphne)
all have slower metabolisms and get fat just looking at a pasture. 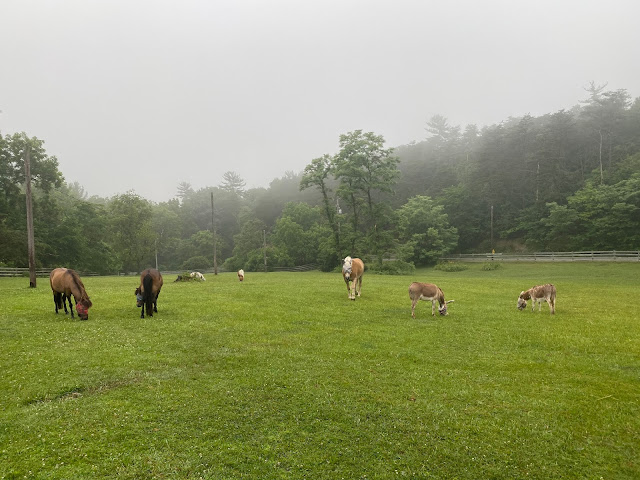 Allowing a horse to get too fat can create dangerous health problems.
I have my herd on a rather strict schedule for feeding and grazing.
And the use of grazing muzzles has helped enormously...
giving the horses added time at pasture. 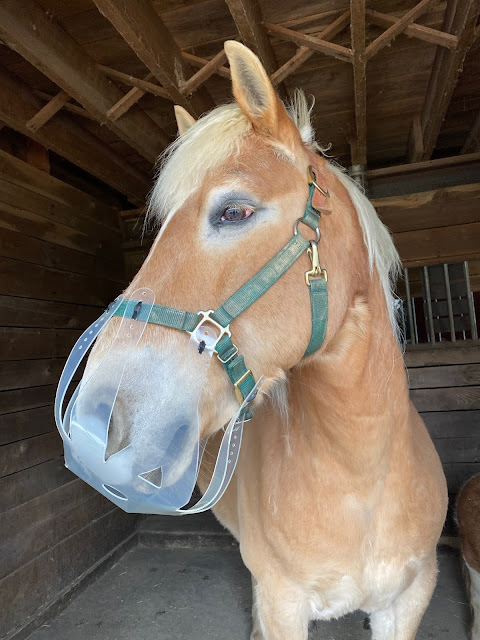 And although they are by no means slender... they are all very healthy...
and well-rested. 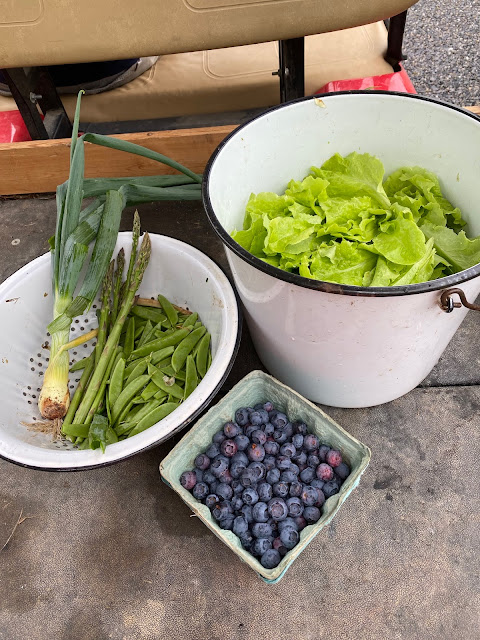 daisy g said…
Thanks for explaining all of that. Imagine how much more we could get done if we only needed a few hours of sleep! On second thought, I do enough, and so do you.
I look forward to my slumber every night.

jaz@octoberfarm said…
a very interesting post! you have lots of blueberry picking ahead of you! do you hand pick or do you have something like a cranberry picker?
June 24, 2020 at 11:55 AM

Jeannie said…
I've always wondered about horses and their sleep patterns. Thanks so much for taking the time to explain this. Perhaps you've answered this before, but what about the eye coverings they wear? I love your blog and look forward to reading it each day!

Lynne said…
Interesting . . .
I have always wondered
and you have answered!
Thank you . . .
Your Blueberries are earlier than ours!
Great to munch on, great for breakfast, great for baking!
Just plain GREAT!
June 24, 2020 at 5:48 PM